In Norway, church member gives all credit to God. 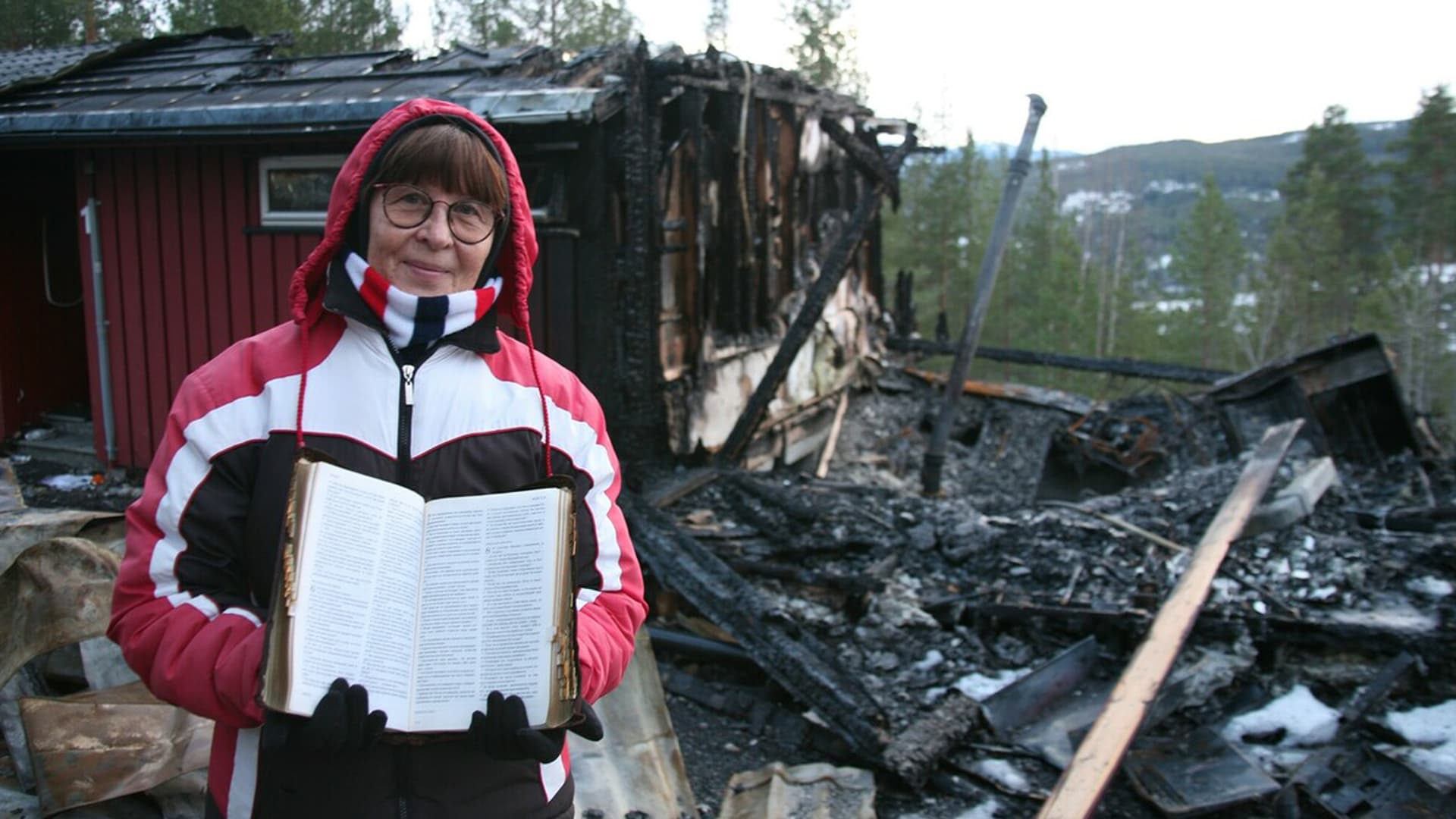 Valentina Melentjeva with her precious Russian Bible in front of her home at Fredheim Lifestyle Center in Kongsberg, Norway. The building was gutted by fire on December 5, 2021. A few days later the Bible was found practically untouched by the flames. [Photo: Marika Reistad Gourmaud / Adventist Media Exchange (CC BY 4.0)].

The precious leather-bound Bible that Valentina Melentjeva had received while trying to understand God’s message was found almost totally unharmed after her home was gutted by fire in December 2021.

In the middle of the night, Melentjeva stood helplessly and saw her home burn to the ground despite the efforts of the fire brigade. She was devastated over losing everything she owned. But her main concern was her precious Bible.

When the fire broke out just before midnight on December 5, Melentjeva had already gone to bed at nearby Fredheim Lifestyle Center in Kongsberg, Norway, where she worked. Her home was a staff apartment belonging to the institution. Melentjeva’s son and her son’s wife were visiting at the time, and they were using the apartment and had to flee the burning building.

Melentjeva stood with her family and friends as they watched the building burn in the cold winter night. Tears streamed down her face. She was grateful that her family members had escaped unharmed from the burning building, but all her possessions were consumed in the blaze, and she feared she would never see her precious Bible again.

Melentjeva grew up in Klaipeda, the third largest city of Lithuania and situated on the coast of the Baltic Sea. Her mother belonged to another Christian denomination, but her family never owned a Bible, they never talked about Jesus, and they never prayed.

When Melentjeva was 45 years old, she had some very difficult experiences. She was sad and worried. But Ira, a woman in her neighborhood, seemed to be happy and content even though she too had gone through difficult times. One day, Melentjeva asked Ira about the secret to her happiness. Ira invited Melentjeva to her home.

When she went to Ira’s home, Ira placed an open Bible in Melentjeva’s hands. For the first time in her life, Melentjeva held a Bible. It was opened to Exodus 20. “Please read,” Ira said. Melentjeva began reading the commandments. As she read the fourth commandment, she was shocked.

“Remember the Sabbath day by keeping it holy. Six days you shall labor and do all your work, but the seventh day is a sabbath to the Lord your God. On it you shall not do any work, neither you, nor your son or daughter, nor your male or female servant, nor your animals, nor any foreigner residing in your towns. For in six days the Lord made the heavens and the earth, the sea, and all that is in them, but he rested on the seventh day. Therefore, the Lord blessed the Sabbath day and made it holy” (Exod. 20:8-11, NIV).

She tried to understand what she just read. Four times she read the verses of the Sabbath commandment. The seventh day, not Sunday, was the day of rest. This was totally new to Melentjeva. Through her entire adult life she had worked on Saturdays. But now she wanted to live according to the fourth commandment. She decided to begin keeping the Sabbath.

The next Saturday, Melentjeva went with Ira to worship with the other Seventh-day Adventists in Klaipeda. At the time she worked as a cashier in a grocery store and had every other week off. She was surprised to see that the Seventh-day Adventists worshiped in the same school building where she had been a pupil for 10 years from the age of 7.

“In all those 10 years I had been taught reading, writing, and mathematics, but nothing about God,” Melentjeva said. But now the school building became the center for learning the will of God.

On the second Sabbath in church, Melentjeva received a brand-new Bible in the Russian language. That book became her most treasured possession.

One of the women in the church helped Melentjeva come to know the God of the Bible. Every week for a year, the two women met to study the Bible and pray. On April 24, 2004, she was baptized and filled with joy.

Some years later, Melentjeva moved to Norway, initially to learn more about God at the European Bible School in Skotselv, Norway.

By the time she completed the course at the European Bible School, the cover of her Bible had become very worn through intensive use. She had an artist make a beautiful leather cover for the Bible in which she had found guidance for her life.

Preserved Against All Odds

For several days after the fire the police and fire brigade had cordoned off the site of the blaze, prohibiting everyone from entering the area because of the investigation into the cause of the fire. Finally, the ban was lifted, and her son walked through the rubble, hoping to find anything that had escaped the flames. Melentjeva prayed and hoped against all odds that her precious Bible had survived.

She was overjoyed when her son returned from the site of the fire with her Bible almost completely intact.

The Bible was sitting on a shelf with other spiritual books, among them numerous books by Ellen G. White. The other books on the shelf were badly burned.

“It is amazing what the love of God can do, to preserve the most important thing,” she said, happy to still have her precious Bible.

The original version of this story was posted by the Norwegian Union Conference.