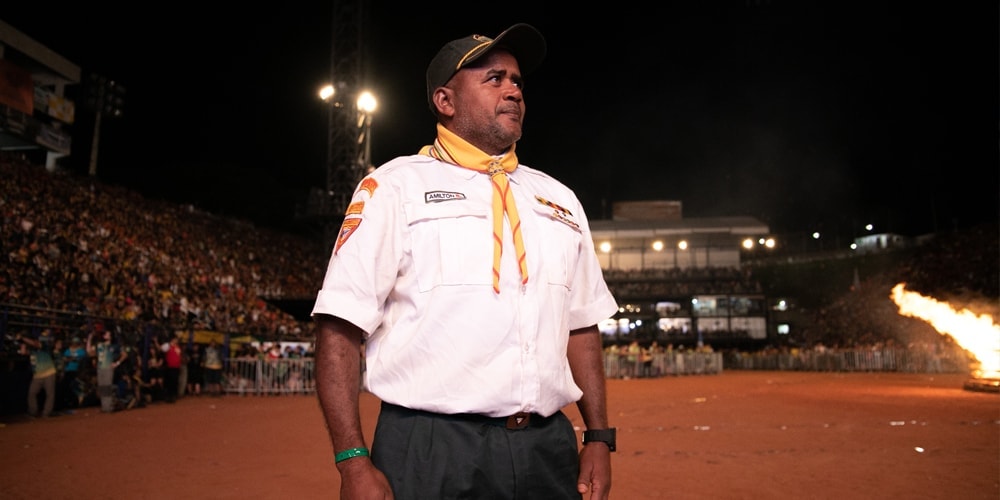 At the age of seven, Amilton dos Santos Cerqueira, from Brazil, discovered he couldn’t see the way other children saw. As years went by and he became a teenager, seeing clearly became more and more difficult for him. Then, at 16, an eye specialist gave him the diagnosis: like some members of past generations of his family, he suffered from retinitis pigmentosa.

Retinitis pigmentosa affects the retina, gradually limiting the field of vision until the person becomes completely blind. In Cerqueira’s case, however, the doctor assured him he would not go entirely blind. But now, at 49, Cerqueira has just 18 percent of his vision during the day, and close to nothing at night.

Despite his condition, Cerqueira has completed 18 years in the Pathfinder Club, a program of the Seventh-day Adventist Church that promotes the physical, mental, social, and spiritual development of young people. He also became associate director of his Salvador, Bahia club.

What is perhaps more striking is that Cerqueira became an instructor of practical activities. “For you to have an idea, everything that involves knots and ties depends on me,” he said. “When a boy ties a knot wrong, how do I know it’s wrong? I use my fingers.”

In everyday life, Cerqueira earns a living as a locksmith, something he has practiced for years. “Not everything depends necessarily on your eyes,” he said. “Everything is in your mind and hands.”

Due to the progress of his condition, Cerqueira was no longer able to read about five years ago. He resorts to audio recordings, even for studying the Bible. His disability was not a constraint for him to fulfill the requirements to become a Master Guide, the benchmark of Pathfinder leadership.

During the first part of the fifth South American Pathfinder Camporee held January 8-13, Cerqueira was inducted as a Master Guide by Adventist Church Pathfinder world leader Andrés Peralta. “It was one of the most exciting moments for me,” Cerqueira said, explaining that his wife has been instrumental though the whole process. “She has helped me write the reports of the activities I completed.”

But with achievement comes responsibility, Cerqueira said. “[Pathfinder] boys now are saying they want to become like me, and I ask the Lord often to help me be a good role model,” he said.

This is already a reality, said 12-year-old Igor Barbosa Machado. “With [Cerqueira] I learned that everyone is the same and that I need to be friends with everyone. And I also learned to respect older people,” he shared.

Thirteen-year-old Marco Oliveira Silva seconded the thought. “What I admire most about him is the desire to move forward, to win and to be much closer to Jesus,” he said.

Leaders said this is the legacy that Pathfinder clubs want to instill in young people. “It is something that is far beyond what eyes can see,” they said.