‘We are not saved to be hermits in a cave.’ 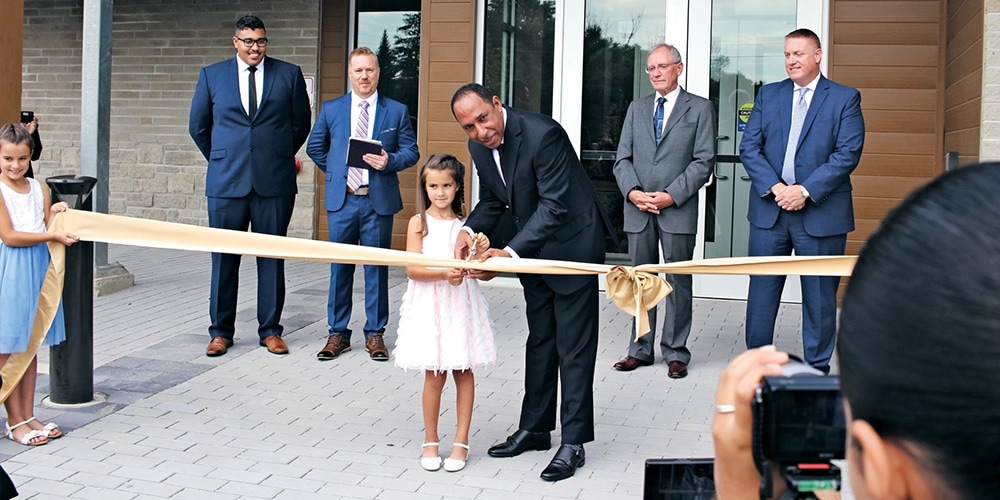 By: Christelle Agboka, for Canadian Adventist Messenger, and Adventist Review

Seventh-day Adventists in Hamilton, Ontario, Canada, recently opened their first center of influence in the province. Really Living Centre was launched in the fall of 2019 at an opening ceremony with hundreds of church members and guests in attendance from across North America.

The 25,000 square-foot (2,300 square-meter) facility is Ontario Conference’s first center of influence, serving as both a worship space for Really Living Seventh-day Adventist Church and a community center open to the public several days a week.

The newly established center will allow for the expansion of existing local church programs, like a plant-based-cooking school; free oil changes for single parents; boot camp, summer camps, and drop-in sports nights for youth; and new programs, such as sewing classes, a smoothie bar, and indoor rock climbing.

“We tried to think of everything — how we can meet not only our needs but also the needs of the community. That’s why we’re here,” said Brenda De Medeiros, a church elder and founding member.

According to church leaders, centers of influence like the Really Living Centre address the reality that, in today’s secular society, traditional outreach methods like public evangelistic series or going door-to-door are insufficient. Ministering to people’s needs and then sharing the gospel — which was Christ’s method in His time — will make the biggest impact, particularly in urban centers like Hamilton, leaders said.

Former Ontario Conference secretary Dan Linrud, the midday service speaker, expressed his joy at seeing the seeds he had planted for such a center 19 years earlier as the founder of Living Word Church (now named Really Living) come into full bloom. He described the church’s humble beginnings, meeting as a small group of roughly 25 transplanted members from the mother church, Hamilton Mountain, in the basement of a church member’s home.

“That small group of believers wanted to make a difference by being salt and light in the world,” Linrud noted. Thus, he said, they followed the Acts 2 model of studying the Word and praying together in different homes, building relationships, and reaching out to the community. Linrud urged all present to allow Jesus to transform them so they could transform and illuminate their communities.

Linrud also praised the church’s current leadership for taking his blueprint, sketched out on napkins at a local fast-food outlet, and making it a reality.

“Pastor Francis and Tina Douville took on the baton of leadership when I left this church, and they are the ones, along with this membership, through whom God has accomplished this amazing vision,” Linrud said. “I’m just so proud of what God has done through them.”

Francis Douville, in turn, praised Linrud as a “man of vision” while also giving credit to the local church members. “I’m surrounded by selfless people who are teaching me how to put God first,” Douville said. “The people in this church are absolutely phenomenal.”

Linrud and his wife, Verlaine, made the trek from Oregon, where Linrud currently serves as Oregon Conference president. Also present were former Living Word associate pastor Juan Fresse, also from Oregon; Ontario Conference president Mansfield Edwards, who participated in a ribbon-cutting ceremony; and the president of the Seventh-day Adventist Church in Canada, Mark Johnson.

In his opening remarks that Saturday (Sabbath), Johnson lauded Really Living as a model for other Ontario churches. “We are not saved to be hermits in a cave. We need to be where God’s people are.”

As he closed, Linrud noted that Really Living Centre was “meant to be a beacon of light [in] a community that is overrun by darkness.” He also reminded his listeners that “as beautiful and amazing as this building is, as comfortable as the seats are, this is not our final destination. This is not our home.”

The original version of this story was posted by the Canadian Adventist Messenger.