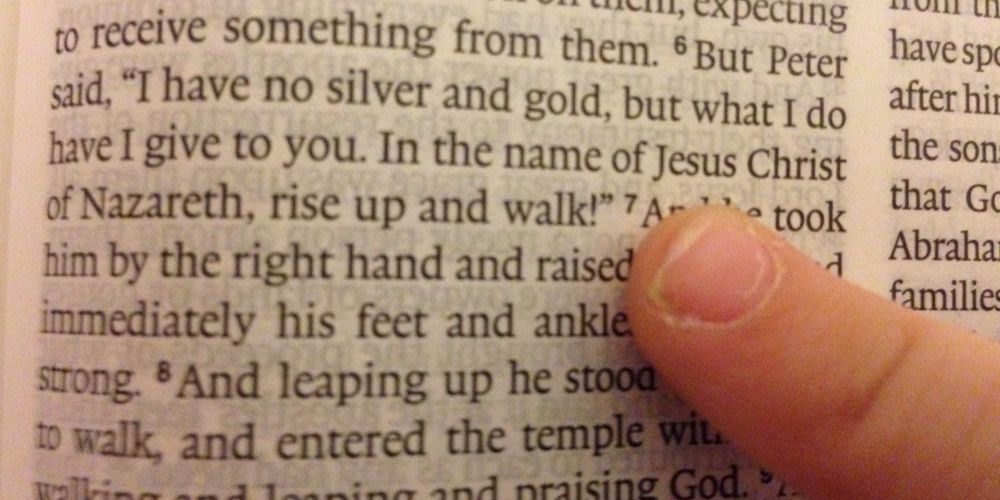 The Syrian refugee approached Anna with worried wrinkles etched across her face.

Zada confided that she was suffering significant health problems that caused hard lumps to form just under her skin. The lumps came and went, and the doctor said they weren’t an issue. But a large, painful lump had recently formed near her heart, and it could prove deadly.

“I haven’t told my kids about the lumps,” Zada said. “Can we pray about it?”

Anna, who directs a Seventh-day Adventist “center of influence” in the Middle East, began to pray silently. She had long guarded her speech with Muslim refugees, but now she saw an opportunity to speak about the power of Jesus’ name.

Should she take it?

Anna and Zada agreed to meet that evening at Zada’s home.

“As I was going through the day, I thought this was a really great opportunity because we were going to pray about something very specific,” Anna said in an interview at her center of influence. “Maybe I should use this opportunity to have a little Bible study about praying in Jesus’ name.”

A “center of influence” is a place used by the Adventist Church to connect with a local community. Centers can feature a variety of activities, including lifestyle education, bookstores, reading rooms, and restaurants, depending on a local community’s needs. The Adventist Review is not identifying Anna’s center of influence or the country where it is located because of the delicate nature of her work. Names also have been changed in this report.

Zada and her three daughters welcomed Anna when she arrived on a recent evening. Anna cautiously asked whether they could have a Bible study together.

“Yes, sure,” Zada said, according to an account shared by Anna.

Anna opened her Bible to the Acts 3 story of the apostle Peter passing by the lame man at the temple gate. When asked for money, Peter replied, “I have no silver and gold, but what I do have I give to you. In the name of Jesus Christ of Nazareth, rise up and walk!” The man got up and entered the temple with Peter, “walking and leaping and praising God” (ESV).

Anna then asked Zada: “What do you think about that? Can we pray in Jesus’ name? Would that be a problem?”

“Sure, but why would you think that that’s a problem?” Zada said. “We pray in Muhammad’s name.”

Anna was speechless momentarily. She remembered her fears. Yet she also saw a new opportunity.

“So you have been praying in Muhammad’s name for many years and you still have this problem?” she said.

“So why don’t we try something different and pray in Jesus’ name?”

All five people in the room prayed: Anna, Zada, and her three daughters.

The next morning, Anna asked Zada how she felt.

Zana exclaimed: “This was the first time in a week that I slept the whole night without any pain and I could breathe!”

“Every night I have been praying in Jesus’ name as I run my hands up and down my body from top to bottom, and I’ve had no problems,” she said.

Anna was thrilled. She said in the interview that her fears about mentioning Jesus had proven unfounded.

Anna’s realization about being more open about her faith was echoed by other Adventist believers interviewed by the Adventist Review during an extended visit to the Middle East this month.

Adventists do need to be sensitive and prayerful as they develop friendships, but they shouldn’t live in fear, said Homer Trecartin, president of the Adventist Church’s Middle East and North Africa Union.

“Each person we encounter is a unique situation,” Trecartin said. “Some just want to argue, and that rarely accomplishes anything. Some have a heart hungering for something but don’t know what. We need to pray for the Holy Spirit to guide us in just what to say and when so that their hearts will be touched and not turned away.”

He underscored the importance of building relationships, especially in the Arab world.

“When people know that we love them and are becoming a trusted friend, they are open to hear about who we love and what influences our lives,” he said. “There is power in the Word of God, and as they hear it from the lips of one they have grown to love and trust, their hearts are opened to the message. May God give us the opportunity to become a trusted friend and then the perfect timing to share what and Who is so special to us.”

Power in the Word

Linda, a former atheist from a European country, shared a story similar to Anna’s. She said she had lived for a year in the Middle East without mentioning Jesus’ name to any Muslims. She also had been reluctant to cite Jesus’ Word, the Bible. While Muslims revere the Quran, many view the Bible as an error-filled text.

“We were really too scared. When we hear the word, ‘Muslim,’ we freeze,” Linda said. “But it’s all in our heads, perhaps because of the media.”

She said she has come to understand that Muslims are “ordinary people like us.”

“I was an atheist, so I can see now that they have the same longings that I had,” she said. “We all want something better.”

One person who wanted something better was Abbas, a Syrian refugee who expressed deep sadness about his life. His wife had tried to commit suicide twice, and his eldest son had joined a street gang.

As Linda prepared to go, Abbas repeated the Bible verse to her.

“This is so plain,” he said. “Now I am going to think about these things.”

Linda said Abbas’ sadness has lifted, and his family’s home life has significantly improved in recent months. She said she was glad that she had taken the risk of reading from the Bible.

“As a church we are generally very careful when it comes to Islam,” she said. “But I have found that God’s word has power. People hear a power that they cannot deny when you share a verse or a story. People accept it because it touches their hearts and lives.”

Profile
One Day Online, One Day In-Person in the Digital Middle East
Integrating every church media platform to impact lives across the region.
News
Adventist Pastor Helps Save Drowning Driver Before Evangelistic Meeting