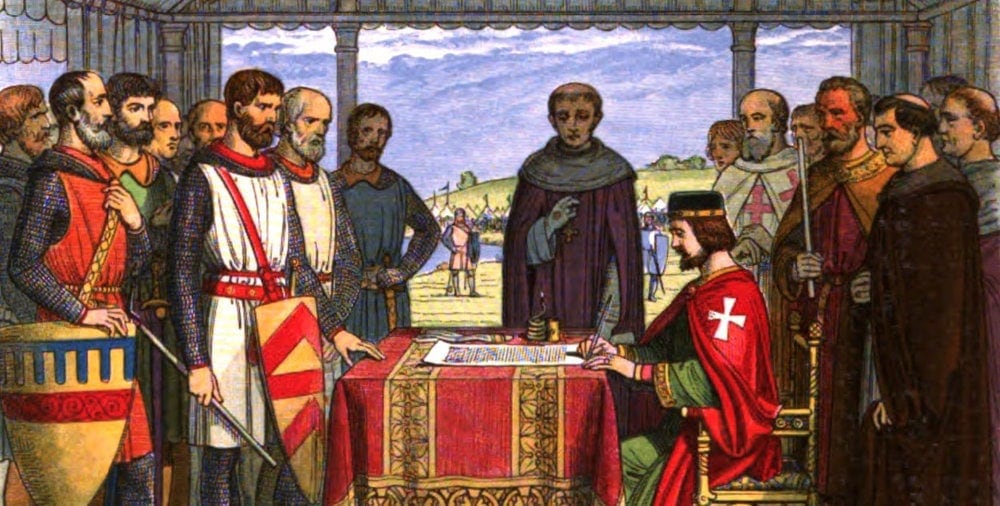 By Bert B. Beach

On June 15, the English-speaking peoples mark the anniversary of the Magna Carta. Exactly 800 years ago a reluctant King John (Britain has never had another King John) was forced by English barons to give his assent to a fundamental document that has become a symbol of liberty and opposition to arbitrary government. Much later, the principles of the Magna Carta came to America through the early charters of the English colonists.

During the Victorian era the Magna Carta was viewed by many with almost reverential esteem; but not so in 1215. Over the centuries, however, great principles of law and freedom have been extrapolated from Magna Carta. It can be seen as the progenitor of constitutional government, and an ancestor to the United States Constitution and its Bill of Rights.

In England, both Richard Lionheart and his brother, John, failed as kings—Richard by being an absent king on Crusades and other foreign adventures; and self-indulgent John by what we would today call psychiatric problems, including paranoia. King John lost half his kingdom in France and was defeated by Pope Innocent III, one of the strongest political popes in history. John abased himself before the Pope.

To top things off,the powerful English barons revolted against King John. Then a dramatic event took place at Runnymede, a little meadow along the Thames, near Windsor castle. The King submitted and accepted the demands of the barons in the form of the Magna Carta.

Reading that document today is not particularly interesting. What’s significant is what is implied and has been developed over the centuries. The document closes with a guarantee that the king would obey the document. The barons certainly knew their king!

Sure enough, King John repudiated the document soon after, claiming duress. The Pope supported him and relieved John of his oath. Magna Carta seemed dead. However, the barons invoked the security clause and proclaimed feudal rebellion. John died in 1216. The Magna Carta was reissued in 1225, under the rule of King Henry III, with some changes. In reality, the Great Charter of 1225 is the Magna Carta of English law, not the prototype of 1215.

What is the Magna Carta’s significance for us today? Not really the rather selfish and narrow demands of the barons looking after themselves, but the increasingly exalted symbols of timeless liberties that Prime Minister William Pitt the Elder called the “Bible of the Constitution.”

True, in the thirteenth century few people benefitted from Magna Carta. Through the centuries, however, with its invocation during various conflicts between king and baronage, king and parliament, and between royal prerogative and common law, Magna Carta became an ever more exalted manifesto, a symbol of liberty and a battle cry against oppression.

Under its system the church was to be free, with the right of free election. Due process of law, jury trials, and property rights were upheld. The significance of the Magna Carta of 1215/25 lies not in historical nobility or romance, but rather in being a first step toward constitutional government, which is so dear to American and Adventist hearts.

The law is greater than king or president. Rulers are not above the law, but responsible to it. The legal system is above those who operate it. All this is understood as vital in America. The police, as we have seen in recent months, must be servants of the law and exercise proper judgment in upholding it.

Magna Carta has had a significant impact in the United States, not from its feudal language, but because of the more general and basic clauses and the protected freedoms they offer. Examples are the habeas corpus clause of the U. S. Constitution and the due process clauses of the fifth and thirteenth amendments. American constitutionality is one of the direct results of Magna Carta, declaring that some documents are above and control laws. In fact, George Washington called the U. S. Constitution the Magna Carta of this nation.

This explains why several years ago the American Bar Association raised a monument at Runnymede, for which Allan Collins, the well-known Seventh-day Adventist artist, served as sculptor.

As one involved in upholding religious and civil liberty over many decades, I humbly rank the Magna Carta as among the most significant documents in the pursuit of God-given liberty in human history.

It also pleases me greatly that it was signed on my birthday, albeit eight centuries ago.

Bert B. Beach has served the cause of religious freedom both within the Seventh-day Adventist Church and to the larger worldwide Christian community.