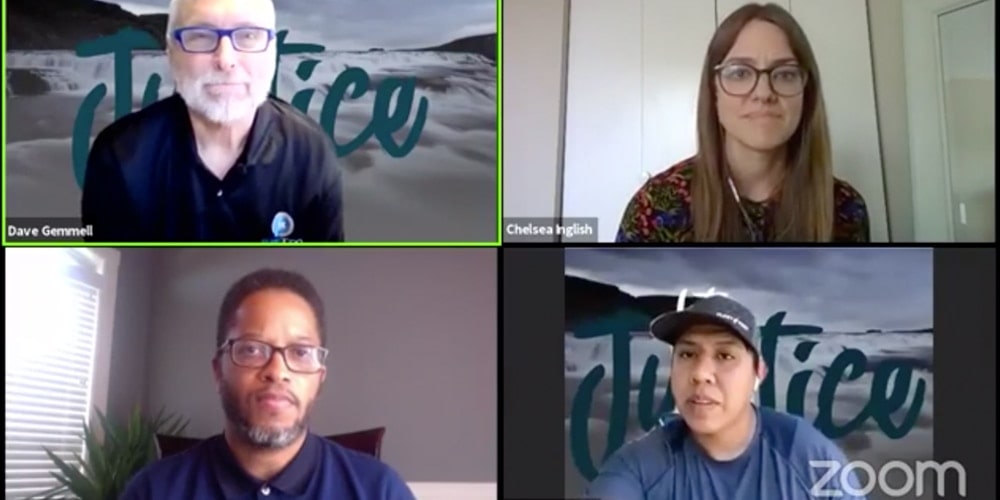 “Pastors and church leaders, thank you for joining us,” said Ivan Williams Sr., North American Division (NAD) Ministerial Association director, in a statement read by Sidnee Kilby, Ministerial Association administrative assistant. Williams, who could not be present for the NAD’s ‘Let Justice Roll’ virtual conference on June 10, 2020, continued, “This conference is born out of moral outrage over the systematic injustice and racial discrimination long endured by African Americans in and out of the church.”

Williams referenced the recent killings of George Floyd, Breonna Taylor, and Ahmaud Arbery by police as the impetus behind the video virtual conference that also was live-streamed on Facebook. “The Ministerial Association of the North American Division has chosen to voice its moral outrage and to act,” Williams stated. “In the words of Nelson Mandela, ‘No one is born hating another person because of the color of his skin, or his background, or his religion. People must learn to hate, and if they can learn to hate, they can be taught to love.’”

“We are focused today on what can be done as spiritual leaders and pastors and the Seventh-day Adventist Church, standing on the shoulders of early abolitionist Millerites,” Williams added, also sharing several recommended actions for pastors.

Presentations were followed by a short question-and-answer period, with some of the questions taken from the 1,000 comments on Facebook.

“What does a member do when the leadership does not believe strongly in social justice as some members do?” was another question answered during the conference.

The conference concluded with Chris Oberg, senior pastor at the La Sierra University church in California, leading a reading of a pastoral prayer of repentance.

A few days after the conference, more than 26,000 viewed all or part of the event on Facebook.

The NAD is following up on the conference with the “Special Day of Prayer for Racial Justice and Equality” on Saturday (Sabbath), June 27. And a webpage is being created for resources for racial justice and equality suggested by Adventist pastors and leaders.

The conference offered information, practical advice, and best practices for participants as presenters shared their experiences and expertise. Below are just a few highlights from some of the speakers.

“To be silent is to be complicit. Silence in the face of injustice betrays the gospel and encapsulates the Laodicean prophecy in Revelation 3:14-22,” Ivan Williams said. “Neither do we choose to remain safe or sanctimoniously aloof when people are hurting, grieving, or suffering in the church communities we pastor. We are our brother's keeper. We choose to act because just recognizing the problem is only half the solution. Doing something, confronting this immoral poison is to bring remedy to the sickness.”

“I count it a privilege to be here today, to participate in what is a watershed moment for North America, for our division, and the nation of the United States,” said Daniel R. Jackson. “The visceral reaction that has taken place to — or as a result of — the wanton, willful murder of George Floyd has sent a ripple not only through America but around the world. People everywhere have been shocked.”

Jackson encouraged, “As pastors, we must become involved. We cannot be silent. Martin Luther King Jr. made this statement: ‘There comes a time when silence is betrayal. In the end, we will remember not the words of our enemies but the silence of our friends.’ As a pastor, your role and my role is to reach into the lives of people and help them grow and develop beyond where they are right now. We are hoping that not only will we encourage our pastors to become involved in the struggles of people, but we will also encourage our members to speak to their public representatives, talk in the local situations, and become involved. To remain aloof from this situation leaves us in a very dubious position.”

“When Jesus started His public ministry, if you examine the Scripture of Isaiah 61, it was to speak up, to stand up for those who are disenfranchised, those who cannot stand for themselves,” said G. Alexander Bryant. “And we are most like Him when we are doing what He did. And so, I want to thank each of the pastors who are here. As Adventists, we have long been proponents of righteousness. But justice and righteousness are twin brothers. We cannot do the one well without doing the other. I encourage each of us to stand as Jesus did, to do as Jesus did, and to be counted as Jesus would.”

“If we’re serious about our faith and about living in earth’s judgment hour, we have a decision to make. Will we stand for creation as God made it, or will we submit to man’s traditions, and the arrangement of this world that the devil and sinful man has put up?” Hall asked. “Do we want life the way He made it? Or do we want a life with racism and hatred and sin and oppression? What life do we stand for as Seventh-day Adventists?”

“We want our churches to deal with the four tiers in which racism presents itself within structures and systems (institutional, structural, interpersonal, and internalized racism). First, pastors must preach out against and rebuke racism,” said Claudia Allen. “In addition, we also need our pastors and our leaders to engage in restoration. What is it that we are doing to actively restore the brokenness that racist systems have given to predominantly Black and Brown communities? What ministries, what initiatives, what ways are we practically deconstructing and destroying the systems that have made our communities poor, specifically around police brutality?”

Peter Landless, born and raised in South Africa, shared his experiences with Nelson Mandela and concluded by saying, “There needs to be an acknowledgment of what has taken place. We have not yet come to the table and confessed. We have not acknowledged it. Ellen White writes, ‘Christ came to this earth with a message of mercy and forgiveness. He laid the foundation for a religion by which Jew and Gentile, black and white, free and bond, are linked together in one common brotherhood, recognized as equal in the sight of God’ (Testimonies for the Church, vol. 7, p. 225). Hard change demands confession. Before confession can be true, I need to be repentant. My prayer is the journey will go on. Acknowledgment for the repentance and a determination by His grace will change the way we are.”