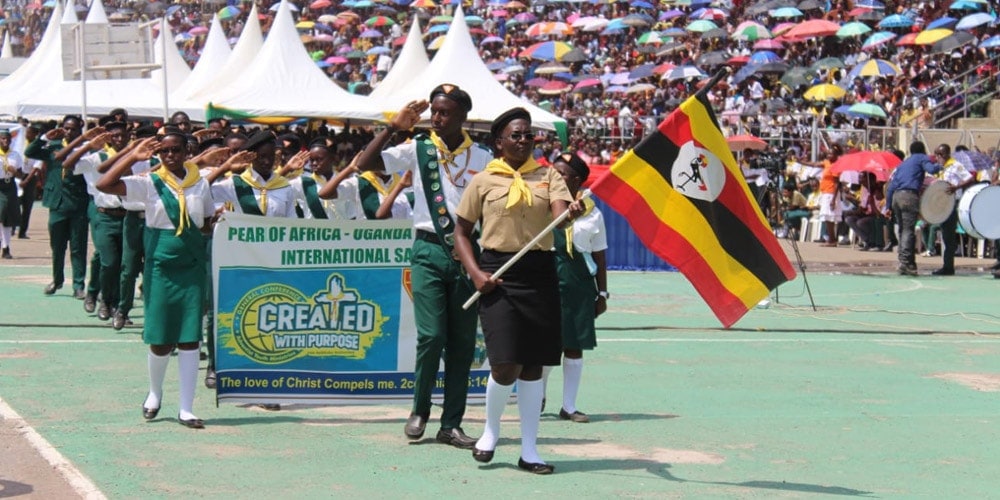 For the first time in Tanzania, Seventh-day Adventist Pathfinder clubs in the northern region celebrated an anniversary in the CCM Kirumba Stadium in Mwanza. More than 3,000 Pathfinders and more than 10,000 church members attended a special service on September 21, 2019. Church leaders were also present, including Adventist youth ministries associate director and Pathfinders director Andrés Peralta.

Eza Kabuche, a Pathfinder leader in the Kirumba Seventh-day Adventist church, said it was a momentous occasion for her and her ministry on behalf of Adventist young people.

“I will not forget this September 21st, thanks to this great event,” she said. “Seeing these acts has made me proud to help young people serve the Lord.”

This year, festivities coincided with several Pathfinders initiatives and activities, including the Pathfinders Parade performance demonstrations. The event also included sharing information on the role and mission of Pathfinder clubs, Pathfinder songs, and personal testimonies. All of this, leaders said, has brought to the forefront the purpose of Pathfinder clubs and the missional role of members, in keeping with this year’s theme, “Created With Purpose.”

“The visit of Andrés Peralta, who is also the director of Pathfinders worldwide, is a great honor for the Seventh-day Adventist Church in Tanzania,” Lekundayo said. “He could have chosen to be at another part of the world for this event, but he chose Tanzania instead.”

Lekundayo also thanked and congratulated Magulilo Mwakalonge, director of the East-Central Africa Division (ECD) youth ministries, for the success of the event. At the end of the day’s ceremonies, Mwakalonge led the baptism of more than 100 Pathfinders who gave their lives to the Lord.

On top of the day's festivities, Pathfinders and leaders took part in community service activities in the area.

Around the world, Adventist Pathfinders celebrate their special day on the third Saturday (Sabbath) of September each year. Celebrations for 2020 are scheduled to take place on September 19, where it is expected church leaders and members will remember 70 years since Pathfinders’ establishment in 1950. Preparations are already underway, leaders said.

Pathfinders is a ministry of the Seventh-day Adventist Church that works specifically for the cultural, social, and religious education of children and teens. Boys and girls 10 years old and up are members of clubs in many countries around the world.

The original version of this story was posted on the Northern Tanzania Union Conference news site.