In Philippines, Outpouring of Prayer and Support in Wake of Devastating Typhoon 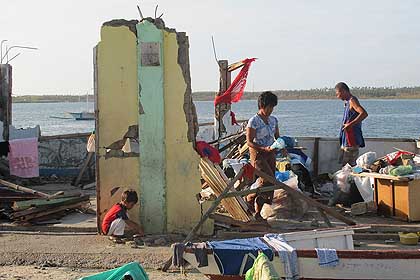 Seventh-day Adventists worldwide are rallying support and prayers in the wake of what is likely the Philippines’ worst natural disaster and one of the most powerful recorded typhoons to ever hit land.

With cell towers toppled, widespread power outages and roads clogged with debris, communication—especially to remote rural areas—remains “very challenging,” according to a situation report from the Adventist Development and Relief Agency, the church’s humanitarian arm.

“We are still trying to connect with our people, pastors, church members and loved ones in the hardest-hit areas,” said Adelaida Ortilano, ADRA Philippines office coordinator.

General Conference president Pastor Ted N. C. Wilson, in Manila for the church’s Southern Asia-Pacific Division Year-End Meetings when the typhoon struck, urged Adventists worldwide to join him in “special prayer” for those in the central Philippines “who received such a devastating blow.”

Wilson also led a prayer service for the victims during a large rally in Manila on Sabbath, or Saturday, November 9.

“Certainly, this is the time for the Seventh-day Adventist Church to show Christ’s compassion and power to help rebuild lives,” Wilson said in a statement from the Manila International Airport.

ADRA aid crews have been on the ground in the Philippines since last week, tracking the typhoon’s anticipated path and poised for rapid assessment, ADRA officials said.

“The damage we are seeing so far is huge and scattered. We are expecting huge numbers of damaged homes and displaced residents,” Musico said after an initial assessment.

The ADRA Philippines office owns water purifiers that will likely be deployed to provide potable water to devastated communities, officials said. A technical support team from ADRA Germany is expected to arrive on Tuesday to assist in the implementation of this water purification system.

ADRA Philippines is planning to send an appeal for donations to regional ADRA offices around the world. Needs are “overwhelming,” a news release from the office said. Emergency funds in the country are dwindling due to a series of recent disasters, including October’s magnitude-7.2 earthquake.

National President Benigno Aquino yesterday declared a “state of calamity” in the country. Philippines officials estimate that at least 10,000 people may have died in the storm. If confirmed, it would make Typhoon Haiyan the country’s worst recorded natural disaster.