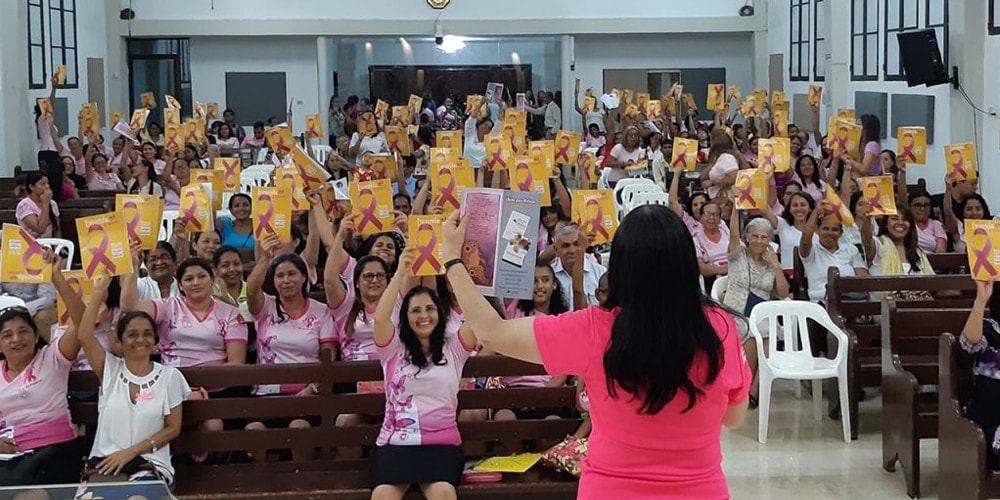 Thousands of Seventh-day Adventists across the North Colombia Union church region recently joined efforts to highlight breast cancer awareness during a special campaign coined as “Tócate para que no te toque,” or “Touch yourself so it doesn’t touch you.”

Women’s ministries leaders and church members distributed 15,000 copies of a special-edition magazine on October 19, 2019. It was published this year as part of a women’s ministries initiative across the Inter-American Division to empower women to reach other women.

“We wanted to join this effort as a church to bring about awareness and prevention of breast cancer and give a message to women as well as men,” said North Colombia Union Conference women’s ministries director Sara Polo Redondo. “[We wanted them to understand] that they must take care of themselves as part of preventing the disease.”

According to the World Health Organization (WHO), breast cancer is the most frequent cancer among women, affecting 2.1 million women each year, and it also causes the highest number of cancer-related deaths among women. Every year, about 7,000 cases of breast cancer are diagnosed in Colombia, and 2,500 women die from the disease.

On city streets, church leaders and members organized activities such as a demonstration of healthy foods; practical exercises to prevent the disease; spiritual and psychological counseling; walkathons; special marches; and exchange of flowers for cigarettes.

Many community leaders thanked the church for assisting others in looking for a solution to this pressing problem, church leaders said.

“I’m so thankful to the Adventist Church for this campaign, because in this way its leaders are bringing awareness to the population about the type of problem that we are facing today,” said Edinson Gómez, a citizen living in Medellín.

In addition, many local Adventist churches took part in breast cancer awareness with health expos, free medical check-ups, and talks on how to prevent and detect breast cancer for thousands in the community.

In Barranquilla, a nearby city in the Atlantic region, talks were held where the public health secretary, Claudia Peña, praised the work of women of the church.

“It is a work that must be exalted in this ministry, and it must be replicated not only in churches but in the entire community as well,” Peña said.

Redondo said that women’s ministry leaders across North Colombia are committed to continuing with breast cancer awareness activities. “They want to make it an annual event,” she said.