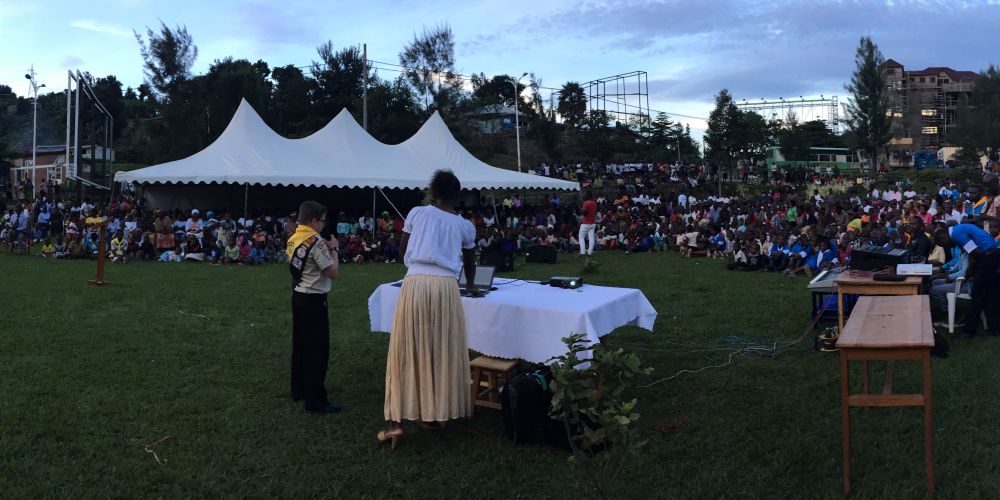 A 12-year-old adopted boy from Russia has expressed joy that hundreds of people are giving their hearts to Jesus as he leads his first evangelistic series in a city park in Rwanda.

Dillon Smith, who lives in the U.S. state of Maryland, was supposed to preach a children’s sermon every evening before his mother addressed the adults at their site.

But time constraints prompted Kent Sharpe, coordinator of several meeting sites, to suggest that Dillon take over the main meeting from his mother last Sunday night at the park in Karongi, a city located 100 miles (160 kilometers) west of Rwanda’s capital, Kigali.

After some coaching and encouragement, Dillon agreed — and was thrilled to see hundreds of people answer his call to accept Christ that first night.

“I was really excited,” he said Tuesday. “It was surprising to me because I did not know that that many people would come up.”

Dillon, who was baptized the Sabbath before he arrived in Rwanda, has now joined the ranks of speakers leading Seventh-day Adventist evangelistic meetings at more than 2,200 sites across Rwanda. Local church members have prepared their neighbors and communities for the meetings with several months of Bible studies. Local church leaders are praying that the meetings, which began last Friday night, will culminate in 100,000 baptisms on May 28

Even though she is no longer preaching, Dillon’s mother, Jackie O. Smith, couldn’t be happier.

“I think this will be a life-changing experience for Dillon,” said Smith, assistant director of the Sabbath School Personal Ministries department of the Adventist world church.

“He has been elated at the response, to know that what he has said is really getting through to people and they are responding to the invitation,” she said, speaking in a Skype call as Dillon sat nearby. “But we cannot take credit. Local people have been doing a lot of the hard work before we arrived. Their work with the Holy Spirit is the key to the success of these meetings.”

The Smith family adopted Dillon and his twin brother, Dawson, at the age of 2 from an orphanage in the Russian city of Novosibirsk. Before leaving Russia, the U.S. parents dedicated the boys to God at a local Adventist church. In dedicating the boys, the Russian pastor said, “Who knows, maybe they will come back one day to preach in Russia,” Smith recalled.

Dillon has shown an interest in preaching for some time, his mother said. At home, he has used a book to preach during family worship time. Last summer, he told his mother, “Mommy, I want to preach a sermon.”

Smith saw an opportunity for Dillon to fulfill that dream when she learned about the Rwanda evangelistic meetings several months ago. Dillon signed up to preach Truth for Youth, an evangelistic series for children. His brother, who didn’t mind staying at home with his father, may get an opportunity one day to pursue one of his interests as well, Smith said.

When asked to take over the adult meeting, Dillon wasn’t initially sure that he was ready. The presentations, prepared by evangelist Mark Finley, were longer than the children’s program. Speakers can simply read the words off the computer screen, but the language was at a higher level than Dillon spoke.

Smith edited the sermons to bring them to Dillon’s level, and Sharpe gave him some speaking tips. On Sunday evening, Dillon donned his Pathfinder uniform and spoke about the evening’s theme, “The Lamb of God,” to a crowd of some 1,000 people.

Several local church leaders, worried about a shutdown of the park ahead of a visit by Rwanda’s president to the city the next day, took steps to conclude the meeting early. But the visitors insisted on running the meeting to the end — and they said God blessed in a mighty way.

The park was closed on Monday night for the president’s visit, so Sharpe invited Dillon to preach to 1,500 people at his site.

“He had the people in the palm of his hand as they listened to this 12-year-old boy share Jesus,” Sharpe said.

An Example Worth Following

After the meeting, Sharpe urged other young people in the crowd to follow Dillon’s example.

“We have a young man, 12 years old, doing this, and they can do the same thing and share Jesus with people as well,” Sharpe said in an interview.

Another boy, 9-year-old Joseph Liga, whose U.S. parents are participating in the Rwanda meetings, preached his first sermon on Monday evening. Sharpe expressed hope that the boy would continue to preach.

Children have preached at Adventist evangelistic meetings in the past.

“We’ve had a lot of experience with young people,” said W. Benny Moore, a veteran organizer of evangelistic meetings, who is in Rwanda assisting Adventist Church president Ted N.C. Wilson at his site

Moore spoke of a 12-year-old boy from the Chicago area who accompanied his parents to an evangelistic series in Kenya. One of the speakers pulled out at the last minute because of a family death, and the boy volunteered to take her place.

“Twelve years old. Never preached before. But he was a good preacher,” said Moore, who heard the boy preach.

Several thousand people attended the meetings every night, and 100 to 200 were baptized at the conclusion, he said.

“When they preach these meetings, they are able to see how all of the Adventist message fits together,” said Moore, whose own grandson started preaching in church at the age of 12 and joined his grandfather in leading evangelistic meetings in Romania at the age of 16. “We have been able to see the impact that it has on their future once they understand why we believe what we believe.”

Meanwhile, Dillon, a sixth grader, isn’t sure about whether he wants to preach full time when he grows up. He is thinking about becoming a paramedic. But he is confident that anyone can preach with God’s help.

Asked what advice he would give a boy or girl who was considering preaching an evangelistic series, he said: “You can do it. Just trust in God.”

Reflecting on his own impressions after preaching two meetings, Dillon said simply, “I am just happy that all those people decided to accept Jesus.”