How God Changed a Brazilian Voice 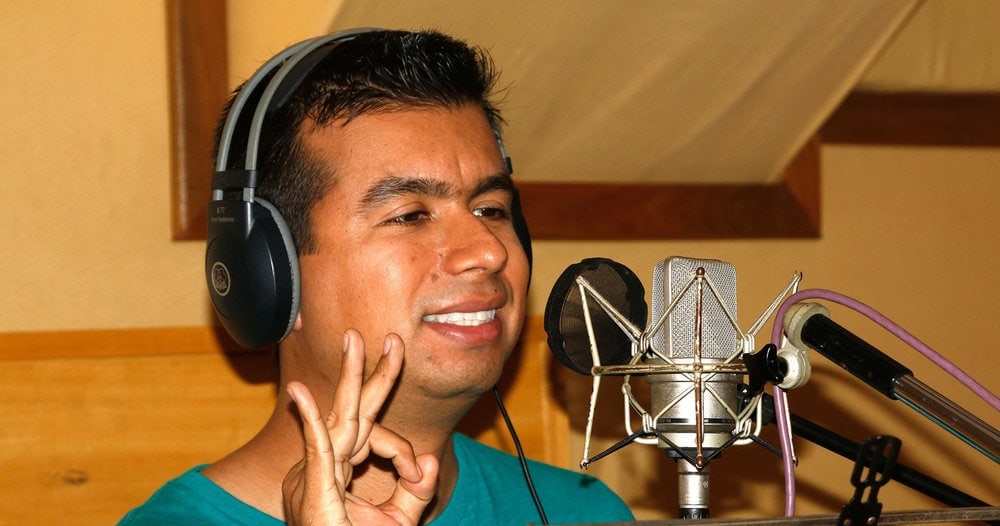 Daniel Gonçalves may be the best-known Adventist voice in Brazil.

Every Sabbath morning, some 10,000 Adventist congregations across the South American country listen to Gonçalves’ deep baritone voice as they watch a video presentation that he makes of the weekly story from Adventist Mission.

The popularity of his video packaging of the mission stories, which are typically read out loud from a magazine at Sabbath schools in other countries, could be considered an astounding feat that opened the door to a new job as the official Portuguese-language announcer for Adventist Mission.

But the real miracle is how Gonçalves’ voice abruptly changed from a “girlish” pitch when he took a public stand for God at the age of 17, said Gonçalves, known to many as “Daniel Locutor,” or “Daniel the Announcer.”

The experience, which Gonçalves shared for the first time this week, is a mission story in itself.

As a teen growing up in the southern Brazilian city of Florianópolis, Gonçalves spoke with a thin, high voice that he considered a constant source of embarrassment.

“I thought it was ugly. It was very high pitched,” Gonçalves said in an interview.

He was left red-faced many times when he answered the phone at home and callers mistook him for his mother.

After high school, he entered his first secular school to take preparatory classes for the mandatory national exam that would determine whether he qualified for a coveted scholarship at a state university.

Preparatory classes are deemed essential by all Brazilian students who cannot afford to pay private university tuition. The classes are not a place for discussion. Students usually sit silently and take notes as the professor speaks.

Gonçalves sat beside another Adventist young man in a class of about 150 students.

'It Was a Reflex'

One day, Gonçalves found himself listening in disbelief as the professor ranted against God during a lesson on evolution versus creation. Before he knew it, his hand was in the air.

The other students gaped at Gonçalves in surprise. The Adventist friend whispered, “What are you doing?”

The professor acknowledged his raised hand.

The classroom was dead silent as the students listened in awe.

“If I taste an orange right here in front of you I can tell you that it’s sweet or sour, but you don’t know that until you have tasted the same orange,” Gonçalves continued. “So don’t talk about God like that because you haven’t tasted Him. I encourage you to get to know Him, then you’ll get a clear picture about what to talk about.”

All eyes were now trained on the professor. After a pause, he apologized and didn’t mention God again.

As Gonçalves sat down, his friend said, “Why are you doing this voice?”

“I’m not doing any voice. This is how I talk,” Gonçalves said.

“Stop it! Be quiet,” the friend said. “You’re talking really loud with a really deep voice.”

“I was scared and really surprised,” he recalled in the interview. “I didn’t understand why it sounded so different. I noticed that my voice reverberated a lot more and came from deeper inside me.”

Gonçalves, who recently was invited by Adventist Mission to become the official voice for its Portuguese-language productions, spoke about the experience for the first time during a departmental worship this week at the General Conference’s headquarters in Silver Spring, Maryland. He offered additional details in a subsequent interview.

Adventist Mission leaders said they were thrilled with how Gonçalves has brought mission stories to life for so many people in Brazil.

Almost immediately after the incident in the classroom, he ran into a stranger in a shop who complimented his voice and asked if he worked for one of the most popular radio stations in Brazil. A short time later, he was offered a job at another radio station.

Six months passed before Gonçalves got used to his new voice.

Gonçalves ultimately didn’t pass the state exam, which would have put him on track to work as a dentist. Instead he retook the exam and became a journalist.

In addition to the new position with Adventist Mission, Gonçalves, 33, works as an announcer on Adventist-operated Novo Tempo radio in Brazil and as a journalist for his local conference.

MISSION STORY: A 2-minute, 25-second video produced and narrated by Daniel Gonçalves for the Nov. 15, 2014, mission story from Adventist Mission. In Portuguese. The full story in English is here.

The Story Behind the Mission Story

His video presentations started six years ago when his home church asked him to make a recording of the latest Adventist Mission story, which in addition to being published in a quarterly magazine can be found at the end of each week’s lesson in the Adult Sabbath School Bible Study Guide. The church wanted to try something different because people were not paying attention to the stories and some were actually falling asleep, Gonçalves said.

He decided to give it a shot. Together with his wife, he shortened the mission story and reduced its structure to a basic plotline. He found a few relevant pictures. Then he got to work in a makeshift studio in his home, recording a reading of the story set to pictures flashing across the video screen.

The presentation was a hit, and more followed.

Other churches soon expressed interest in using the videos, and Gonçalves now uploads the weekly stories onto YouTube and his personal website, daniellocutor.com.br, for other churches to use. The 10,000 churches that regularly show his presentations in Sabbath school represent most of the 13,000 Adventist churches in Brazil.

“It was never my purpose for the videos to become this big,” he said. “I only wanted to simplify the stories because I found my mind wandering during Sabbath school.”

Gonçalves said he still doesn’t quite understand what happened in the classroom as he prepared for the national exam. But he saw a parallel between his experience and the biblical story of Joshua, who was called three times by God to be strong and courageous in replacing Moses as the leader of the Israelites in Joshua 1.

“When Joshua was called by God, he may have felt the same way as me when I raised my hand,” Gonçalves said. “Joshua was called to be the leader who succeeded Moses, and it is uncertain where he got his courage from. But through him, God was able to clear Canaan for the Israelites.”

Gonçalves said his personal appeal to others is to show courage and let God provide the voice.

“We might be discouraged or shy,” he said. “But we have to raise our hands in the classroom and believe that God will give us the power to share the gospel, just as I was able to speak to the professor.”

Adventist Mission's website, which includes all the current mission stories in English