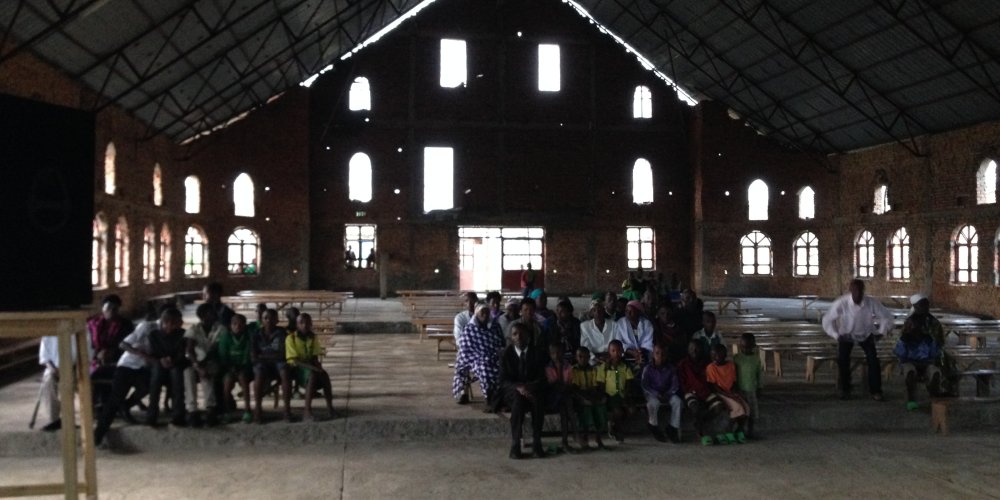 Tens of thousands of people gathered at more than 2,200 churches and other sites across Rwanda on Friday evening for the start of a two-week evangelistic series that is expected to culminate in 100,000 baptisms.

A meeting led by Adventist Church president Ted N.C. Wilson got off to a rocky start amid rain and a power outage in Gisenyi, a resort town of about 106,000 people on the shores of Lake Kivu in western Rwanda.

The meeting went ahead as planned, but the electricity problem, blamed on an overloaded grid, prevented the Adventist Church-operated Hope Channel from broadcasting the event live.

Wilson, who arrived in Rwanda on Thursday after a five-week trip through South America, the South Pacific, and Southeast Asia, said he was thrilled about the prospect of sharing the Bible — and staying in one place — for the next two weeks.

“There is a great amount of anticipation and excitement going through the church in Rwanda,” he told the Adventist Review. “Everyone has been preparing for these multiple sites across the country. It will be a great privilege to be at one of those many sites.”

A total of 3,000 people were trained to lead meetings at 3,000 sites this month, but local organizers ultimately decided to go with only 2,227 sites but larger meetings, said Duane McKey, a coordinator for the Rwanda event and a special assistant to Wilson.

“They are still praying for 100,000 baptisms in two weeks,” McKey said Friday. “They will probably baptize people throughout the meetings at some sites, but we will have a large one on Lake Kivu on the last Sabbath.”

People will be bussed in to Gisenyi from around the country for the May 28 baptism.

Read also: Unprecedented 100,000 Baptisms Expected in Rwanda in May

Most of the presenters are regular church members from Rwanda, McKey said. But 98 speakers came from the General Conference, the administrative body of the Adventist world church, and another 70 came from the church’s Nairobi, Kenya-based East-Central Africa Division, including its president, Blasious M. Ruguri, who is leading a large meeting in Rwanda’s capital, Kigali.

Concurrently with the meetings, the Adventist Church is offering a mega-clinic with free dental, medical, and vision care at a Gisenyi church. The 18 medical volunteers at the clinic, which opened Thursday, have treated about 350 people so far, said Fred Hardinge, associate director of the Adventist world church's health ministries department, who is in Rwanda.

The Adventist Church also provided free medical services during a major evangelistic series that resulted in 30,000 baptisms in Zimbabwe in May 2015. That two-week clinic treated 34,513 people.

Ahead of the Rwanda meetings, employees of the General Conference and the North American Division were especially encouraged to participate. Organizers said that speaking at an evangelistic series can be a powerful experience that not only leads listeners to baptism but also draws the speakers closer to God.

Wilson said his own participation would provide him with personal encouragement.

“Every time I preach these precious Bible truths, I get reconverted, so to speak,” he said. “It’s just thrilling. The Word of God and our precious Advent message is so rock-solid. It’s from heaven. And that’s why you just appreciate it every time you are able to share it.”

Among the other visiting speakers are Wally and Christine Amundson, career missionaries who moved to Honduras 2 ½ days after their wedding in 1973 and subsequently worked nine years in Africa, including five in Rwanda, and 23 years in the Inter-American Division.

“Now that we have just recently retired, we have more time to be involved in evangelism,” said Wally Amundson, who served as field secretary and ADRA director for the Inter-American Division. “So Christine and I thought it would be really wonderful to come back to Rwanda.”

Amundson said the country has changed remarkably since their time here in 1979 to 1984, when he oversaw the local work of ADRA’s predecessor, the Seventh-day Adventist Welfare Service.

“We can see a new optimism in the country, and with that optimism comes a new openness to things that are new, for instance the gospel,” Amundson said. “So we are hoping that this enthusiasm will be the first step for these meetings to be a success.”

Christine Amundson, who is preaching for the first time, said hours before her first meeting that she figured it was better to start late than never.

“I am excited, a little bit fearful, but still excited,” she said with a smile.

Commentary
Ted Wilson’s Philippines Trip Was ‘Just in Time’
From visas to rain and a helicopter, God’s timing is called perfect.
News
Baptisms, President’s Message Highlight Evangelistic Thrust in the Philippines
Leaders emphasize the importance of getting every member involved in mission.