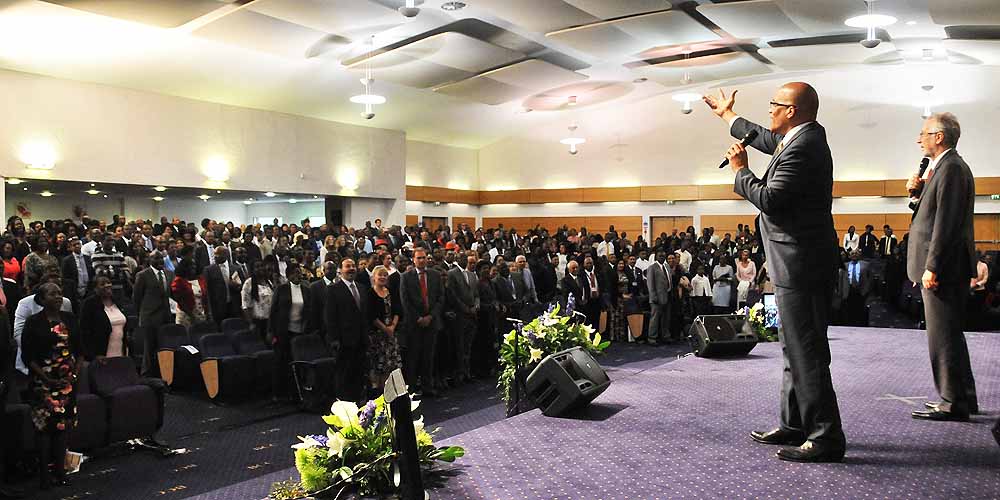 Some 2,000 attendees at the Adventist Church’s first religious
liberty festival in Britain committed to promote the freedoms in their
communities and wherever else they have influence.

The pledge came at the end of a two-day “Free to Worship”
festival held at the Bethel Convention Centre in West Bromwich, a city located
5 miles (8 kilometers) northwest of Birmingham.

John Graz, public affairs and religious liberty director for
the Adventist world church, cautioned the audience, which included lawmakers, other public figures as well as many Adventists, that apathy toward promoting and protecting religious
freedom could come at a high cost.

“If we don’t promote and protect religious liberty, we will lose it,” Graz said.
“The most difficult place to promote it is in countries where we have it. But
people should remember that a lot of sacrifices have been made to arrive at
where we are today.”

He delivered a report on the state of religious freedom in
the world that underlined new challenges and recent violence in Iraq against
minority Christians.

He emphasized that Adventists should defend freedom of
conscience for people of all faiths, as well as people with no faith.

Attendees approved a resolution on Sabbath, Aug. 16, to work
to maintain religious freedoms both locally and wherever they have a sphere of
influence.

Keynote speaker U.S. Senate Chaplain Barry Black emphasized that religious
worship must lead to action. “Worship is what happens during the church
service, while it should be seen as commencing when the service ends,” Black
said.

Black referred to Matthew 25 and Luke
4:18-19, saying each “confers upon the worshipper the liberty to feed
the hungry, clothe the naked and minister to the marginalized.”

Black continued, saying, “True worship also grants us the
liberty and courage to be prompt in publicly voicing
concern and offering solutions to social ills which threaten human dignity.”

“The fact that we are made in God’s image is the foundation
of human dignity itself,” he said. “We can only understand who people are in
the light of who God is.”

Delbert Baker, a vice president of the Adventist world church, told of Pastor
Antonio Monteiro who was falsely imprisoned for nearly two years in Lomé, Togo,
before being released in January. Though Monteiro has been released, Baker said,
there are other unresolved cases.

FROM THE FESTIVAL: A report from the "Free to Worship" religious liberty festival at Bethel Convention Centre in West Bromwich, Britain, on Aug. 16, 2014.