Church Leaders Get a Lesson on Marmite and Mission 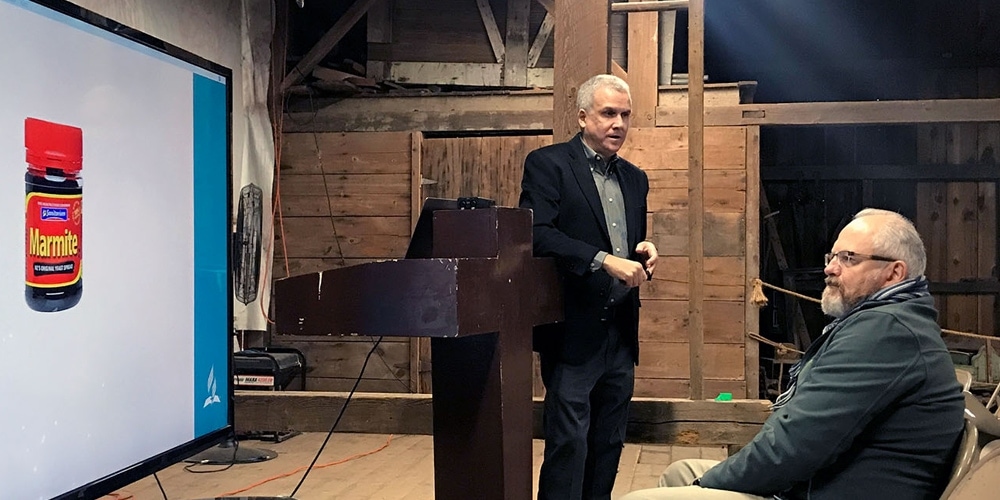 As a boy growing up in Australia, Gary Krause enjoyed spreading Marmite on wholegrain toast for breakfast.

He then ate the salty yeast spread with a sense of pride.

He knew that revenue from the sale of Seventh-day Adventist-produced Marmite was helping missionaries in South Pacific islands.

“For me, it was a symbol of mission,” Krause said. “Every time I saw it, I remembered missionaries.”

In the early days of the church, Adventists viewed the mission field as limited to North America, and they thought they were fulfilling Jesus’ appeal to reach every tongue and nation by ministering to the large immigrant population. But their viewpoint expanded over the decades to encompass every geographical region of the world and every people group today.

“The Seventh-day Adventist Church has had a change in its focus of mission over the years,” said Krause, now director of the Office of Adventist Mission, in a presentation called “To the Ends of the Earth.”

Along the way came many milestones, such as the first official overseas missionary (J. N. Andrews, who traveled to Europe in 1874); the Sabbath School mission offering (collected by the Upper Columbia Conference in the United States in 1885 to send missionaries to Australia); and the first Thirteenth Sabbath Offering (to send missionaries to India in 1911).

Initially, Adventists sought to teach other Christians the distinctive Adventist beliefs such as the seventh-day Sabbath and the state of the dead. Only after many years did they start to reach out to other world religions and secular people.

“We had a mission blind spot to people of other world religions and a secular background,” Krause said. “We should have followed the principles that Ellen White talked about.”

Pointing to a statement published in 1898 by church co-founder Ellen White in her book The Desire of Ages, he read, “‘Christ commissioned His disciples to proclaim a faith and worship that would have in it nothing of caste or country, a faith that would be adapted to all peoples, all nations, all classes of men.’”

The church has taken significant measures to fulfill the Great Commission given by Jesus in Matthew 28:19-20, with the establishment of Global Mission in 1990 and, 15 years later, the Office of Adventist Mission, which now oversees Global Mission. Among other things, Adventist Mission plants hundreds of churches every year and oversees six research centers that focus on major world religions and secularism. It also employs thousands of Global Mission pioneers — indigenous people who share the gospel with their people group.

“The gospel message is usually easily carried to local people by local people,” Krause said. “I would say thousands of congregations have been planted by Global Mission pioneers.”

Church leaders who attended Krause’s two presentations, on October 12 and 13, 2018, spoke of their desire to see the gospel reach the ends of the world.

Ryszard Jankowski, president of theAdventist Church in Poland, said much has been accomplished since the church was established in 1863 but work remains to be done even in reaching other Christians.

“We are still learning,” he said. “Sometimes we build a wall because we don’t know how to present Christ. We need to build bridges.”

“We purchased a boat in the Guam-Micronesia Mission as an experiment,” he said.

These days, mission work can begin with something as simple as finding a common interest with someone and forming a friendship, said Jonathan Duffy, president of ADRA International.

“Focus on what values we share,” he said. “When we find common ground, we can form friendships much more quickly.”

Krause has met many missionaries, but he will always remember Norman and Ruby Ferris, an Australian married couple who worked in the Solomon Islands in the 1930s and early 1940s. In his youth, Krause befriended then-widowed Ruby Ferris while working as a handyman at an Adventist retirement center near Avondale College in Australia. After Ruby died, a relative lent to him her hand-written diary.

The diary was filled with stories about malaria, a near drowning, and other hardships. But Krause said he wept when reading about Ruby Ferris’s return to the Solomon Islands for a visit at the age of 95 in 1994. A boat took her along the shore, and she pointed out church after church that she and her husband had planted. Then the boat pulled into the wharf. More than a thousand Adventists in uniform stood waiting to welcome her and thank her for her missionary work.

Ruby Ferris had never felt that she and her husband had accomplished much in the Solomon Islands, he said. But when she returned, she realized that God had used them to start a great work.

“When we make it to the lake in the Holy City, we also will say, ‘Yes, it was worthwhile after all,’” Krause said.