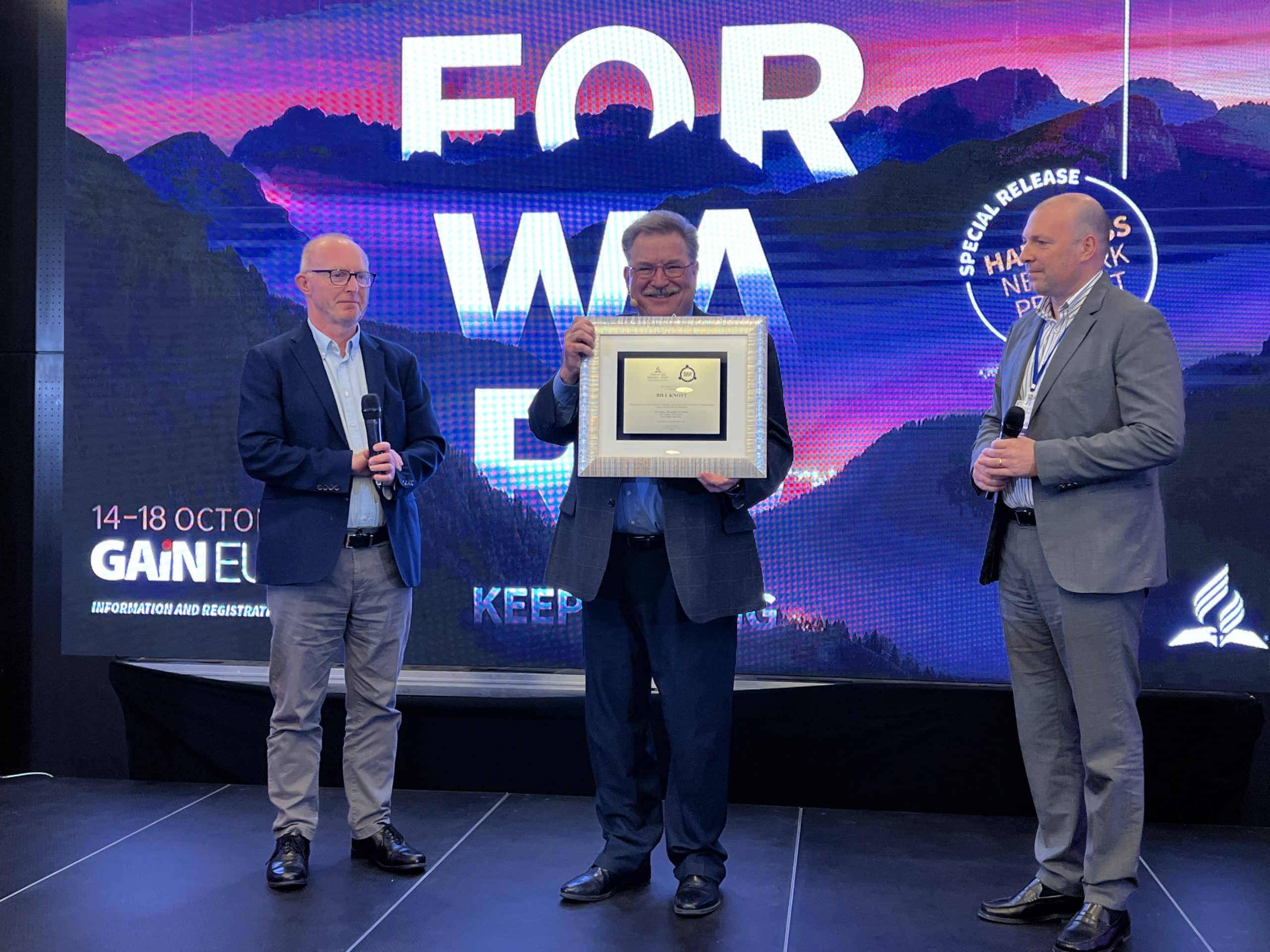 Bill Knott, long-time executive editor of the Adventist Review and Adventist World magazines, received an Award of Excellence in Communication from communication leaders in the Inter-European Division (EUD) and Trans-European Division (TED) of the Seventh-day Adventist Church. Knott will be leaving his position on December 31 after 16 years of service. The brief ceremony recognizing the experienced editor took place on the closing night of the 2022 Global Adventist Internet Network (GAiN) convention in Bucharest, Romania, on October 17. The event gathered more than 180 Adventist communicators from across Europe for training and networking.

According to TED communication director David Neal, who addressed Knott before handling him a plaque, the award was given “in recognition of your commitment, dedication, and service to the Seventh-day Adventist Church leading Adventist Review Ministries.” In that context, the plaque also commends Knott “for leading with insight and wisdom; for leading with integrity; for leading with grace.”

In an interview with TED communication officers on the sidelines of the GAiN convention, Knott elaborated on some of his joys and challenges in leading the magazine that, at 173 years old, even precedes the official organization of the Adventist Church.

He acknowledged that the highlight of his job has been “the transformation, from historic print journal chronicling the life of the church, to a multimedia platform.” He added, “I watched God bring to the ministry, beginning around 2015, an amazing collection of deeply gifted people. And I watched as they began to create products, move the needle, and expand what we were doing.”

Knott described this period of rapid changes as “a dynamic time,” which “required all of us (myself included), to embrace more risk and more change than we probably ever thought necessary.”

It is a process that has shown him that there are many ways to convey the central truths of Adventism, Knott said. “When you start bringing creatives around you, they have thought of eight, ten, twelve ways to do things that never occurred to you,” he said. “Those experiences have reminded me that God has never kept creativity away from His people. He gives it liberally! Our role at the Review, and more broadly in the church, is to embrace that, to say ‘yes’ to that, to find ways to integrate those individuals in the life of our ministries.”

In closing, Knott said that his dream is that the church may keep working with a spirit of inclusiveness to embrace “collaboration and inclusivity.”

“I get to see this process as I travel around,” Knott said. “It is very encouraging to me. … That’s the church I want to belong to!”

David Neal and Vanessa Pizzuto contributed with this report.