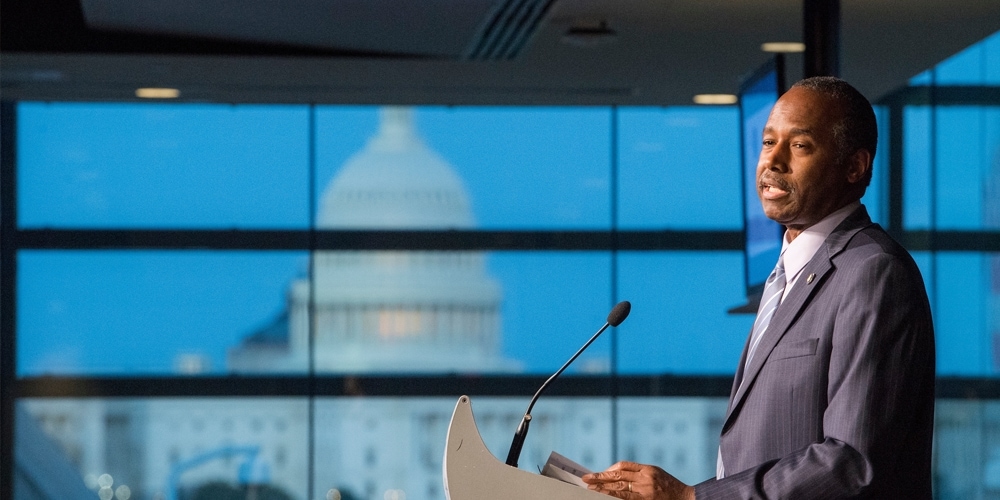 More than 150 diplomats, religious liberty advocates, and guests gathered on June 1 for the 15thannual Religious Liberty Dinner held in the Religious Freedom Center of the Newseum Institute in Washington, D.C. The annual event is held to celebrate and bring attention to a central human right: the freedom of religion or belief.

U.S. Secretary of Housing and Urban Development Ben Carson delivered the keynote address. In his message, Carson made the clear distinction between simply being free to worship and being free to exercise religion not only in the public sphere, but in private businesses and institutions. Carson praised the United States’ stance on religious liberty.

“The Founding Fathers were very aware of the sectarian strife that affected Europe,” Carson said. “They thought of a better way, they instituted a better way. A government that would not establish a single religion. They left the choice of religion up to each individual person. This was more than tolerance, it was religious liberty.”

Carson further encouraged attendees to promote mercy and compassion, rejecting hateful speech and actions in response to the recent murders of two heroic Portland, Oregon, men who were killed by a white supremacist for intervening when the supremacist attacked two Muslim women with hate speech and biased language.

Two awards and a special recognition of service were presented during the dinner to honor national and international religious liberty pioneers and advocates.

Kimberlee Colby, director of the Christian Legal Society's Center for Law and Religious Freedom, was awarded the national award for dedicating more than 35 years to domestic religious liberty cases.

Colby commented on the importance of religious freedom and the recent cultural lack of respect for religious freedom, voicing concerns regarding the repercussions this shift in mindset may have on the capacity at which people may be free to live according to their religious conscience.

Thomas Farr, president of the Religious Freedom Institute, was awarded the international award for more than 20 years of advancing the cause of religious liberty.

Farr believes religious liberty is the first freedom of not only the Constitution, but of the human soul. He shared concerns about the currently skewed perception of religious liberty both domestically and internationally. Farr then proposed ways to become involved in the fight for religious liberty.

“Individuals can live their lives and do what they do as citizens by protecting religious liberty,” said Farr. “If they happen to be religious people, exercise religious liberty publicly not just in your church, synagogue, or house of worship. If you are an entrepreneurial type or working in an allied field, get involved either with your church or religious organization or with a separate NGO that advocates religious freedom. Finally, if you're an American, push your own government to do what its required by law to do, but is not doing very well; and that is advance religious freedom in our foreign policy.”

The third person honored is long-time religious liberty leader for the Seventh-day Adventist Church Bert Beach. Nearly 90, the man who is known to have defined his church’s interdenominational relations, responded with self-effacing humor to the well-deserved honor.