Leaders emphasize the importance of getting every member involved in mission. Dubbed as “Earth’s Final Countdown,” the first leg of the integrated evangelism series came to a close in the Philippine International Church at the Adventist University of the Philippines in Silang, Cavite, on November 6, 2021.

Adventist Church president Ted Wilson N. C. Wilson, who is currently visiting the Philippines, said that “this is a revelation of hope for the people of the Philippines and around the world — 215 countries in Total Member Involvement.” Total Member Involvement, or TMI, is an initiative of the Adventist Church to get every church member involved in mission.

Nightly meetings were led by Duane McKey, president of Adventist World Radio, from October 31 to November 4, 2021. “What a time to be alive! So thrilling and exciting! Praise God that we can be a small part of finishing the work of Jesus!” McKey said.

Instead of making a physical visit to the Philippine International Church, Wilson delivered his message via Zoom. A mandatory quarantine keeping him at a hotel didn’t hinder him from speaking at the meeting. His wife, Nancy, had earlier shared a health talk via Zoom during the service on Friday evening.

“It is a great privilege to be in the Philippines,” Wilson said. “I’ve been here several times, but this time is a unique, a special time to give God the glory for what He’s doing in the Earth’s Final Countdown series,” he emphasized at the beginning of his message.

Wilson mentioned how important it is to feed on God’s Word for spiritual nourishment, something he called “essential” in these last days. “God wants us to be spiritually healthy as well as physically healthy.” He also added that it is vital to consult God through the Scriptures: “If it’s in the Bible, I believe it. If it disagrees with the Bible, it’s not for me.” And lastly, Wilson said that being vigilant can spare the truth-seeker from deceit. “Take the Bible as it reads.”

He also referenced the proximity of Jesus’s second coming and the signs and events surrounding it. In the light of eternity and Earth’s Final Countdown, “Christ’s coming will be a literal, visible, audible, glorious, climactic, and joyous event!” he said.

Harvest during the Pandemic

“The North Philippine Union Conference [NPUC] has been the epicenter of the pandemic, but the pandemic couldn’t stop the work in our territory,” Jose Zabat Jr., NPUC Sabbath School and Personal Ministries director, said. During his baptism report, he emphasized that “through the power of the Holy Spirit, God used care groups, media ministry, and Adventist World Radio as the voice of hope. We have simultaneous evangelistic meetings in 111 sites,” he said.

Moreover, in 2021, 15,000 new members have been added to the territory, and in the region, there are another 2,150 people preparing for baptism.

On November 6, 147 people were baptized at the Adventist University of the Philippines pool. Other baptisms will take place in local churches across the region in the next few days.

Commentary
Ted Wilson’s Philippines Trip Was ‘Just in Time’
From visas to rain and a helicopter, God’s timing is called perfect.
Commentary
When Ted Wilson Preached to an Empty Field in the Philippines
What looked like a curse turned out to be a blessing.
News
Ted Wilson Prays for Philippine President
Adventist Church leader also gives Rodrigo Duterte an informal Bible study. 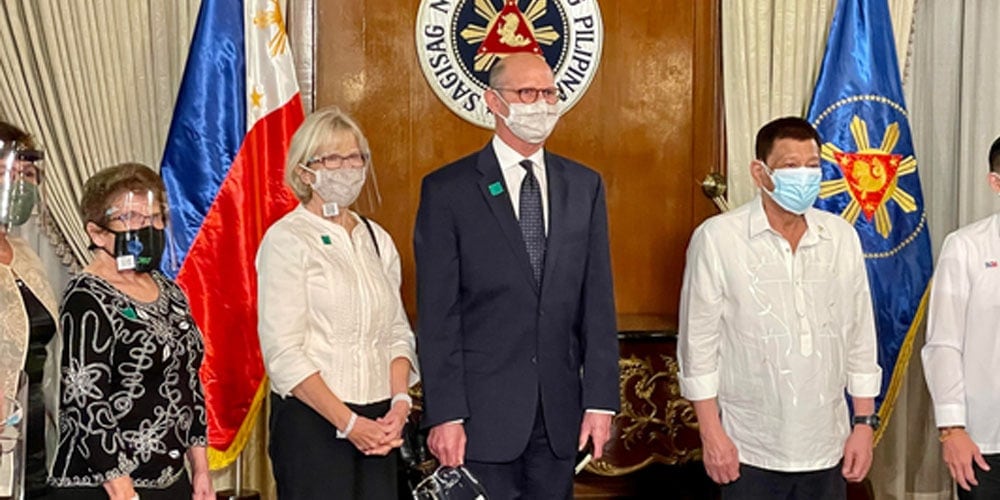