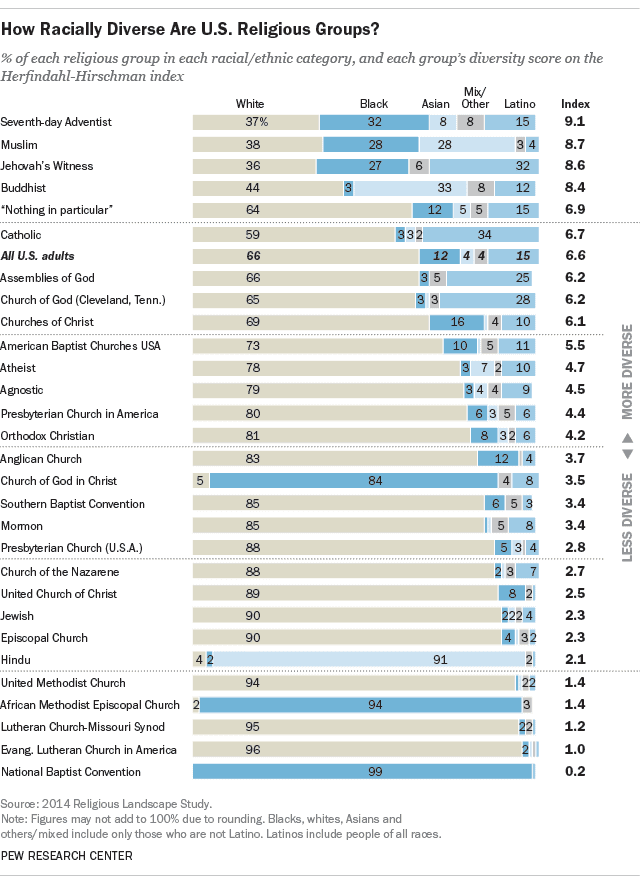 Don’t worry if you happen to walk into a Seventh-day Adventist church in the United States where English is not the first language of choice. Chances are you are worshiping in one of the increasingly typical Adventist congregations across the country.

Seventh-day Adventists are the most racially and ethnically diverse religious group in the United States, according to a report released Monday by the Pew Research Center, a respected non-partisan organization in Washington.

“Thirty-seven percent of adults who identify as Seventh-day Adventists are white, while 32 percent are black, 15 percent are Hispanic, 8 percent are Asian, and another 8 percent are another race or mixed race,” Michael Lipka, a Pew editor who focuses on religion, wrote in the report.

The analysis, based on data provided by the 2014 Religious Landscape Study, looked at the racial and ethnic composition of 29 major religious groups. Racial and ethnic groups were broken down into five categories: whites, blacks, Hispanics of all races, Asians, and other races and mixed-race Americans.

After collating the data, Pew gave Seventh-day Adventists a score of 9.1 in the Herfindahl-Hirschman Index, well above the national average of 6.6, where 66 percent of church membership is white. The least diverse religious group in the United States, according to the report, is the National Baptist Convention, a traditionally black denomination that received a score of 0.2.

Gary Krause, director of the Office of Adventist Mission for the Adventist world church, said the church’s very mission of preparing all people for Jesus’ Second Coming called for diversity.

He noted that the Adventist Church operates in 215 countries and territories. “But we’re not happy about it because the United Nations lists 22 more where we don’t have established work,” said Krause, whose office coordinates and provides funding for the church's global mission work. “We’re all God’s children, and we love to welcome people from all races into our family.”

The margin of error for both the 2007 report and the new report is less than one percentage point, Katherine E. Ritchey, communications manager for the Pew Research Center, told the Adventist Review.

Daniel Weber, communication director for the Adventist Church’s North American Division, said the 1.2 million Adventists in the United States are a direct reflection of the church’s worldwide membership of 18.5 million people and growing.

“As our church has grown overseas and is represented in almost every culture, race and language group, this same diversity has also changed in North America because our experiences with different cultures overseas has allowed us to be more effective in reaching the diverse growing populations here,” Weber said. “The Gospel Commission calls for us to reach all people of all cultures.”

The Adventist world church has not conducted research solely on its diversity. But the findings of an unpublished 2013 general survey of North American church members that included questions on ethnicity fall in line with Pew’s new report, said David Trim, director of the world church’s Office of Archives, Statistics, and Research.

Trim was not surprised by the Pew report, saying the Adventist Church as a whole is very accepting of all people and its message emphasizes commonalities such as a community in Christ and the hope in the Second Coming rather than differences.

“We have an identity that transcends national and ethnic differences — and that is not true for every church,” Trim said.

The Pew report defines a denomination as diverse if no racial or ethnic group amounts to more than 40 percent of its adult membership. Only two other religious groups fit that definition: Muslims (with a score of 8.7) and Jehovah’s Witnesses (8.6), which placed second and third, respectively, after Adventists.

The Herfindahl-Hirschman Index used by Pew is a measurement commonly applied to market share studies, among other fields. It is usually used to contrast monopolies against companies that face less competition.

On the other end of the index’s spectrum, the least religiously diverse groups tend to be denominations where most of their members are either mostly white or mostly black.

The report includes three subsets of people who are unaffiliated religiously: atheists, agnostics, and “nothing in particular.” All three groups are mostly white. 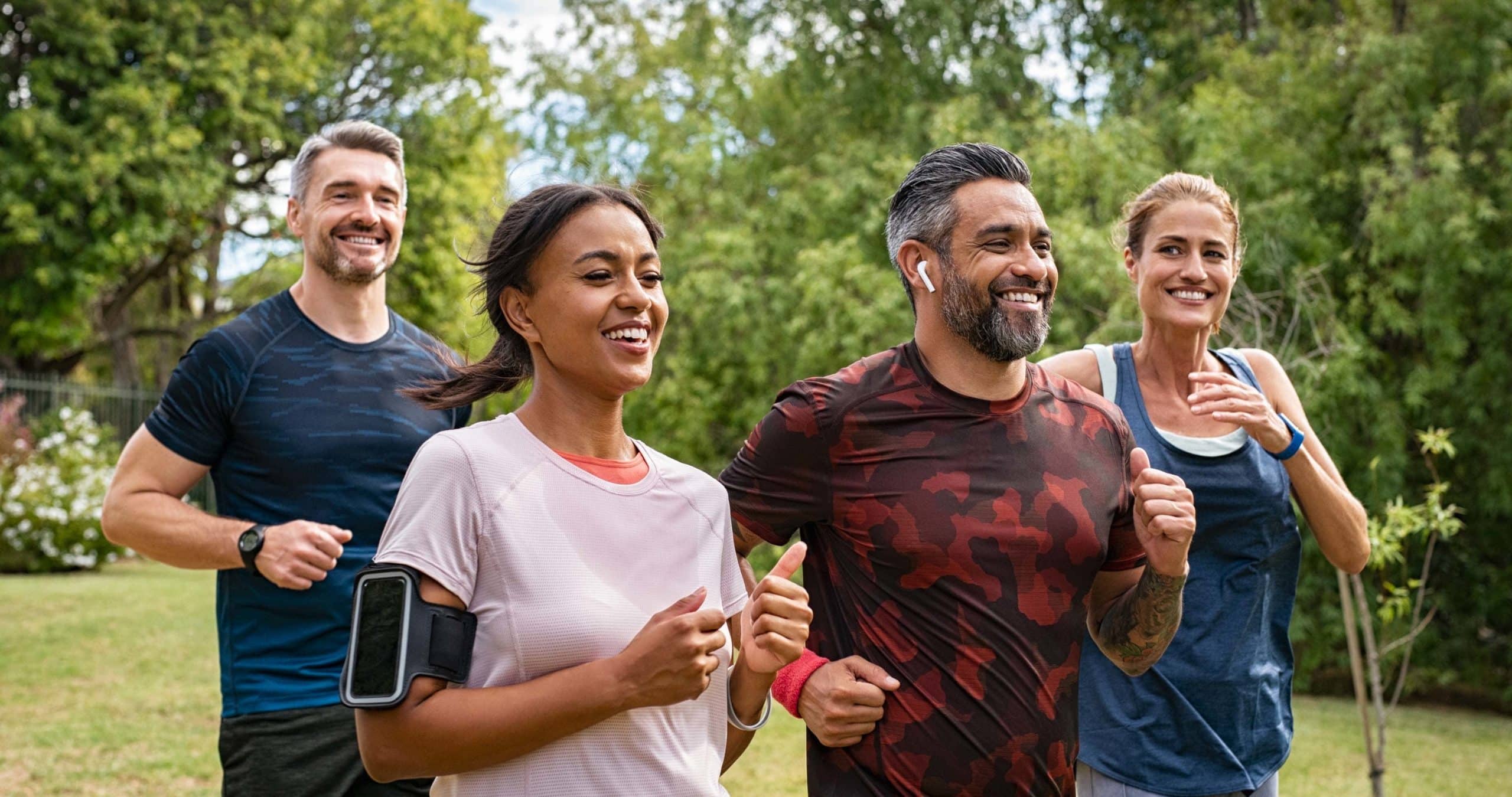 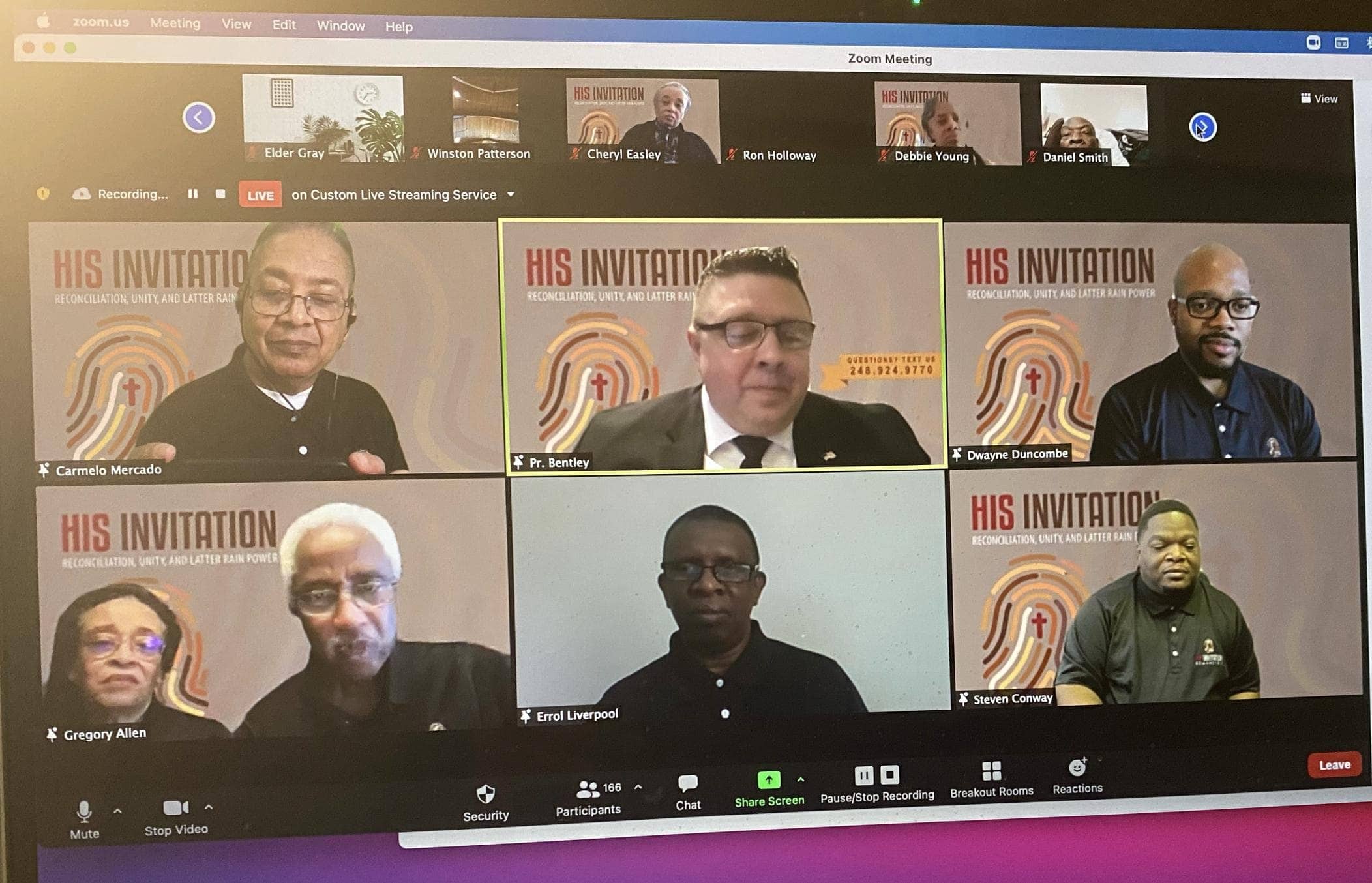