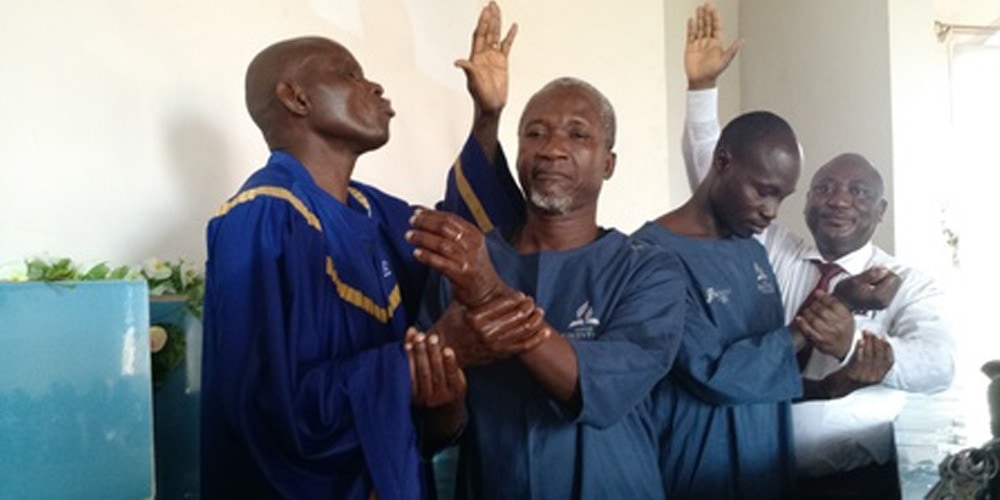 Guinea-Bissau native Nicolas Gomes publicly accepted the gospel message and joined the Seventh-Day Adventist Church on October 13, 2018. Gomes’s baptism marked a milestone, as he is the first person to accept the Adventist message through evangelistic meetings broadcast by a new Novo Tempo radio station in that West African nation, regional church leaders said.

Same Vincent Roger, director for evangelism and Sabbath School ministries in the West-Central Africa Division (WAD) church region, led in sharing biblical messages that were broadcast from the station in the capital city of Bissau. Meetings were held from September 29 to October 13, leaders said, and were crowned with the baptism of one of the listeners.

Gomes and his family had been listening to the radio daily and had accepted the interactive Bible study offered.

“At first, I thought it was a foreign radio, since I had never heard those songs before and the message was very good,” said Gomes. “When they advertised their phone number, however, we noticed it was in Bissau.” He shared that his wife decided to call in to get more information, and they accepted the offer of Bible study.

The Gomeses understood the Bible better after studying at home and listening to the radio, they said. “We were especially interested in learning about the [Ten] Commandments and the heavenly sanctuary.”

Sixteen people were baptized at the end of the evangelism series due to the Novo Tempo radio station broadcasts and personal visits by local church members. President of the Guinea-Bissau Mission Gaspar Gomes said the radio has been a great blessing to the church and the country. “It is with great joy that we witness the first fruit of evangelism through the radio,” he said. “I expect that we will go further, [especially] where pastors and members find difficult to reach.”

Gaspar Gomes explained this new development is essential to consolidate the work of the Adventist Church in the country. “After all, we only have five pastors for the whole country,” he said, “but now we hope to reach people we do not have access [to] due to territorial and religious issues.”

The Adventist radio station is still in its experimental phase, but it has been fulfilling its role of sharing the gospel message with Guineans even though the country is predominantly Muslim. In addition, the station’s focus has been to broadcast programs about health and education, church leaders said.

Roger stressed the importance of the new Novo Tempo radio outlet. “[The] apostle John says angels are crossing the sky as a part of the third angel’s message, and that message is reaching Bissau,” he said. “We must engage the whole church. God asks each of us to be witnesses, first of our own lives and then in sharing the gospel.”

Rádio Novo Tempo has been operating for only three hours a day in a 50-mile (80-kilometer) range, but the results are visible, leaders said. Several people have asked for Bible studies, and two Bible classes were implemented. Also, the church mobilized to raise funds for the radio ministry through the campaign “Angels of Hope.”

“We are preaching the gospel and preparing for heaven,” Roger said.