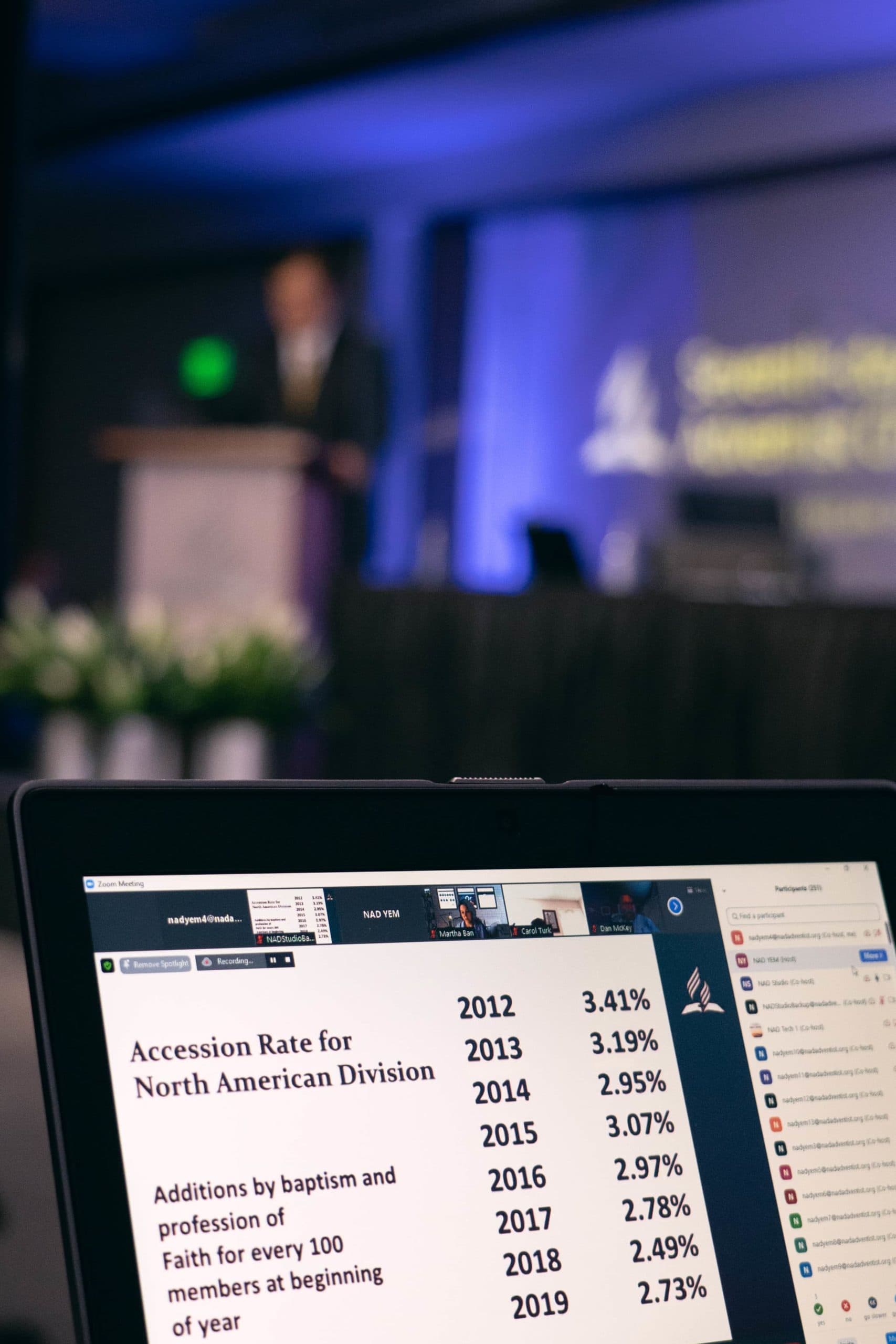 Kyoshin Ahn, executive secretary of the North American Division (NAD), delivered his first report in his new role on Sunday, November 1, 2020. He started the secretary’s report by acknowledging the contributions of G. Alexander Bryant, who is currently the president of the division and was its executive secretary for 12 years.

“First, I want to say a word of appreciation to Elder Bryant,” said Ahn. “He brought a lot of progress to the works of secretariat. Those of us who work at secretariat express our appreciation for his dedicated service.”

Ahn’s report centered on membership within the NAD territory. As of December 31, 2019, there are more than 1.2 million Seventh-day Adventists in the North American Division worshipping in 5,621 churches and 880 companies. In 2019, there were 28,011 baptisms. In addition, 6,372 joined the church through profession of faith.

“One of the joys in presenting the membership report is to show how many new members joined the church each year,” said Ahn. “All together 34,383 new members were added to our churches here in North America. In 2019, our acquisition rate was 2.73 percent. This means that we have added 2.73 members for every hundred members. In each of the past eight years, we had an acquisition rate of around 3 percent.”

The figures from 2019 indicate a net increase from 2018 of 5,734 members. Ahn noted this is considered steady growth versus exponential growth. While Ahn celebrates the growth, he noted the number of "missing" members from last year reached 7,191. Members are considered missing when their church cannot locate them or they have not officially transferred from their church.

“My prayer is that we find them and have many of them return to our local churches,” said Ahn.

Under the umbrella of the secretary’s report, Ernest Hernandez, director of the NAD Office of Volunteer Missions (OVM), shared progress the office has had over the past five years and discussed how COVID-19 has impacted the ministries operations.

“We have witnessed the deployment of nearly 3,000 long-term missionaries from the NAD, including more than 250,000 short-term volunteers. Since March of this year, our missionaries have experienced an unprecedented challenge from COVID-19,” said Hernandez.

In response to the worldwide coronavirus disease pandemic, OVM evacuated 126 volunteers from 28 countries. Hernandez also reported that 101 volunteers serving in 15 countries decided to remain in their roles.

“Currently, we have 60 active sites within the United States, where we are still able to send volunteers, following social distancing and other safety guidelines. We also plan to deploy missionaries to Guam to engage in virtual teaching positions to the Guam-Micronesia islands, with help from NAD’s Hope for Humanity and Adventist Education, and the Guam-Micronesia leadership,” said Hernandez. “Equipment such as laptops and monitors with Internet upgrades are making it possible for our missionaries to minister through virtual teaching to thousands of children on islands we are currently not able to enter.” 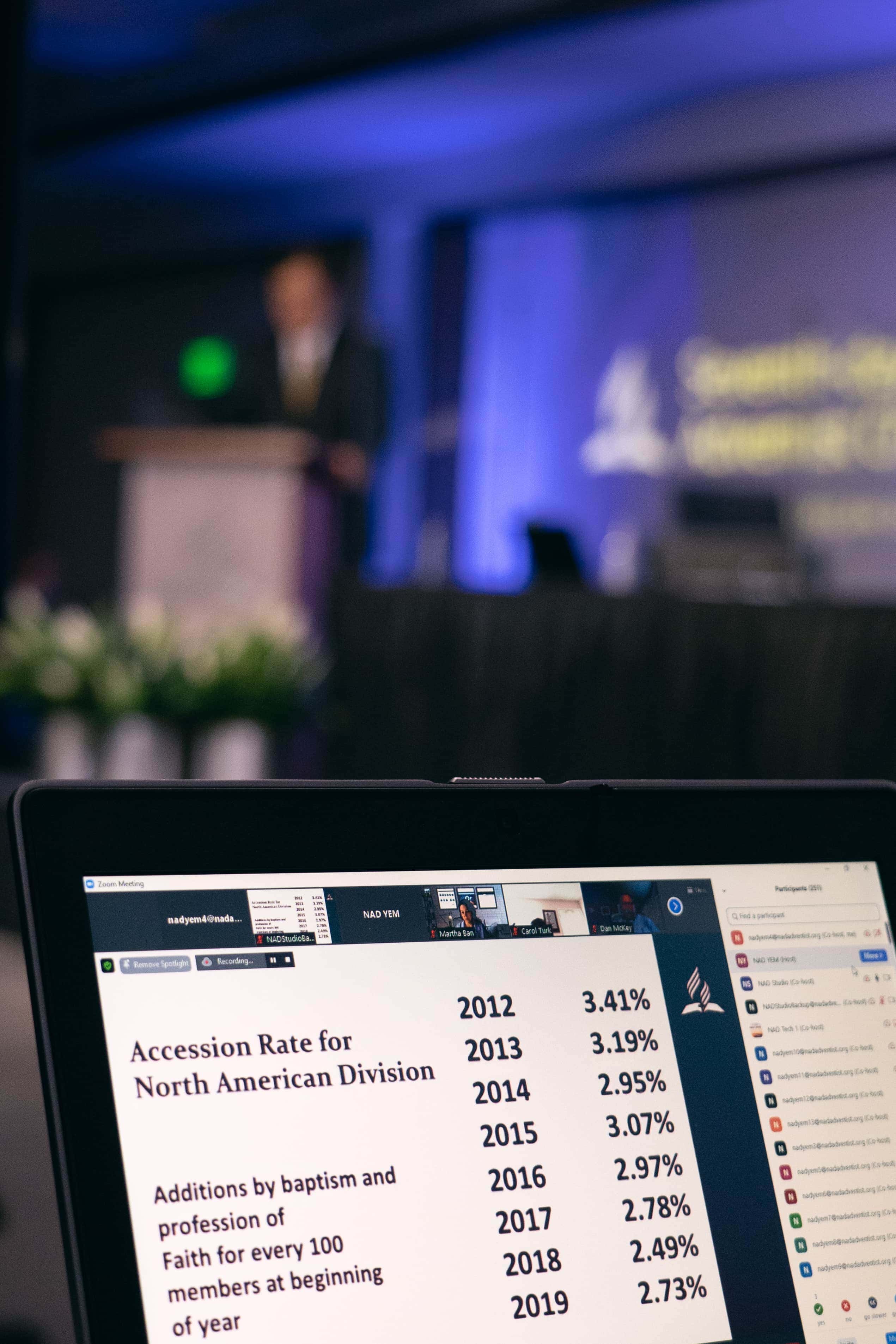 “We estimate there are more than 100,000 volunteers in the U.S. alone engaging in missionary work. Imagine if these groups could talk together to share their visions and find common ground. Tithe money would be used more efficiently, resources could be shared, and the movement of large groups could be coordinated to address places where the gospel has been limited to access,” said Hernandez. “The organized movement of members, churches, academies, and conferences could revolutionize how we engage in mission work.”

Following Hernandez, a report was given by Carolyn Forrest, associate secretary of the division who serves as the director of human relations, inter-division/international service employee resources, and archives and statistics.

“A big area of human relations is listening. And I have found over the years that a lot of times, all we need to do is listen. It's been my privilege, and those that serve with me, to receive phone calls and emails and various messages, asking questions, seeking information. We listen, and we direct to local conference leadership and even the union at times to assist and to answer questions.”

Forrest spoke on the support human relations gives at the NAD headquarters and across the division. Training programs including the annual human resources conference; orientation for newly elected secretaries — under the leadership of the former NAD secretary, G. Alexander Bryant — with a focus on policy, prevention of harassment, sexual misconduct, and locally funded employees; and a new presidents orientation in partnership with Alvin Kibble — NAD vice president with an extensive portfolio that includes executive coaching, training, and development — who led training on ethics and diversity. Forrest hopes to incorporate equity and inclusion in future training events.

Another area that Forrest addressed is the work she's done with the NAD Women in Pastoral Ministry initiative. “As you may recall, we rolled this out in 2015. We said that what we would like to do in this area is to promote the hiring of more female pastors. That was our goal. We also recognize that there needed to be some education taking place in some of our local churches. We provided information in that area because we wanted to emphasize that God calls both men and women.”

Forrest also celebrated the division’s full-time missionaries, or inter-division/international service employees, including dentists, pastors, doctors, and administrators. The General Conference of Seventh-day Adventists also provides support with resource distribution. There are also efforts to recruit from colleges and universities located within the division.

COVID-19 and the Future of the Church

Ahn then pivoted the secretary’s report to discuss how COVID-19 has affected local churches in reporting attendance — in-person and virtual — and conducting baptisms. According to preliminary findings, baptisms and additions through professions of faith took a drastic dip in the second quarter of this year from 3,658 baptisms to 1,565; and 1,342 members added through profession of faith dropped to 425, which reflects the timeline of state and local enforcement of house of worship closures to help prevent the spread of the coronavirus disease. However, the figures rose in the third quarter back consistent patterns exhibited in previous years — 3,893 baptisms and 773 additions through profession of faith.

Ahn said while the deaths reported for the third quarter of this year are higher than deaths in a similar timeframe in years past, at this time, there is no clear correlation between the deaths and COVID-19.

The executive secretary then presented outside research about church attendance and engagement. According to the Pew Research Center, most Americans say they would return to their churches once it’s safe to re-enter. One in five Americans say they will watch online services more than they did before the pandemic. Further, the Barna Group reports that engaged church attendees continue to seek emotional support and a sense of community from churches they attend online, whether it is their home church or churches they've switched to during this time. In addition, there has been a notable amount of people who no longer engage with their local church or any church. Fifty percent of millennials have stopped attending church entirely, according to the Barna Group.

“What then shall we do? Where should we do from here? We’re not sure what new normal we may end up experiencing when this is over. However, we’re not sure of our future any more than we did before the pandemic,” said Ahn. “We may need a new skill set to reach the world in effective ways, yet one thing remains unchanged — we need to keep loving God and loving our neighbor. We place our future in his hands, with absolute confidence that he would lead us home safely. And I believe that is the will of our heavenly father for all of us.”

Ahn concluded his report by asking executive committee member John Freedman, president of the North Pacific Union Conference, to pray for members who lost loved ones due to the coronavirus pandemic.