More Than a Mission 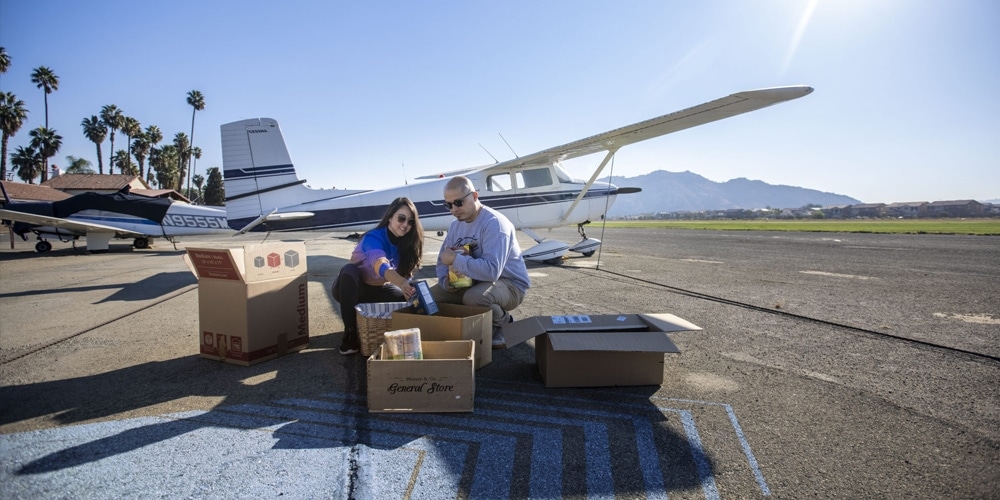 Vanesa Delfino and her husband, Felipe Gutierrez, think about these questions every day. When the couple launched their non-profit foundation, Onward, in 2018, issues like these became an integral part of their new job to create lasting relationships with communities in need.

The Onward Foundation’s mission is simple and powerful: to create unique cross-cultural experiences of serving others through purposeful mission adventures. To best nurture their fledgling endeavor, Vanesa and Felipe sold almost all of their belongings and relocated to his homeland of Chile in 2017. “We felt compelled [to move here],” Felipe said in a vlog on the Onward YouTube channel. “We felt a calling to do mission work full-time.”

But in March 2020, the couple found themselves stuck in California during the COVID-19 crisis. Unable to return to their remote cabin in Villarrica until Chilean travel restrictions are lifted, they have dedicated themselves to continuing their work remotely. Through the friendships and connections Vanesa and Felipe have made in South America, the Onward Foundation isn’t just looking ahead to a post-COVID world — it’s making a difference from a distance.

It made perfect sense to study social work, Vanesa said. For years, she had known that she wanted to be in a line of work that enabled her to help others, especially after spending time volunteering with the homeless community in Riverside, California, United States. She got her first taste of organizing service activities at La Sierra University in 2012, when she was given a special scholarship to lead the inaugural iServe program for that year’s IGNITE Freshman Orientation. “Hundreds of freshmen students throughout Riverside worked to remove graffiti and plant trees,” she said of the service day event. “They visited nursing homes and volunteered in shelters, food banks, schools, and safe houses.”

In addition to her studies, which she completed in 2013, Vanesa was active in homeless ministries at her church. That’s how she met Felipe — he was doing the same thing in his own community — and the two were married in 2012. A mere week after their wedding, they threw themselves into leading a thriving youth ministry at Laguna Niguel Seventh-day Adventist Church. For the next several years, they planned everything from Bible studies to special music events while developing their spiritual growth through preaching. After helping put together some mission trips to the Navajo Nation in the United States, Fiji, and Kenya, the two were fascinated by seeing how the experiences transformed the youth they accompanied. “Interacting with a community completely different from theirs helped them open up their world,” Vanesa recalls of those first few trips. “It was life-changing to watch.”

The young church members returned to California with a new outlook on life; some even decided to change their career paths to better serve their local and global communities. “They would tell me, ‘I want to be a nurse,’” Felipe says. “Or, ‘I want to be a doctor; I want to be a missionary full-time; I want to be a firefighter on the front lines helping people.’”

Seeing the shift in so many young peoples’ perspectives was joyful and rewarding. Still, it also made the couple think seriously about a far-flung goal they had been talking about since they started dating: establishing their own foundation to provide the opportunity for even more young people to have impactful journeys. They had imagined what it might be like to create mission trip excursions that change the lives of the community served and change the travelers’ priorities. “What if we make our own foundation?” they wondered.

“We wanted to do something that was ours,” Vanesa says in retrospect.

“We thought, what would it be like for us to do this full-time?” Felipe adds. “It was a dream, but with God’s help, it’s been coming true.”

As a graphic design student, Felipe felt empowered by the creative culture of the art department at La Sierra. “My experience was beautiful,” Felipe reminisces. “There was a spirit of freedom [there] that makes me miss it still today. I also really fell in love with what it means to be an Adventist.”

The child of a Chilean pastor, Felipe had always been involved in the church. While at La Sierra, he enjoyed delving deeper into local ministry, serving the student body in the Student Association, and taking classes such as “Adventism in the Modern World,” which he now describes as “mind-blowing” for his spiritual journey.

But what proved to be Felipe’s most transformative experience came from the place he expected the least. During his junior year, the department chair recommended him to someone who had been searching for a videographer. The person represented a foundation that would soon be traveling to Kenya for a mission trip — Felipe was a good candidate for the job, and before he knew it, he was on a plane to Africa. “The pure joy and richness of the Kenyan culture, and what you can do in serving the people there, changed my life,” he says.

Felipe knew that this was what he was meant to do. But at the time, he wasn’t sure how to balance what he was studying with what he felt might be his true vocation. After graduating in 2004, he did freelance graphic design work, followed by a job at an entertainment firm and then a senior-level position at a sports company. He continued to serve as a youth pastor at church, but things started to fall into place when he met and married Vanesa. Together, their mutual love of helping others helped them imagine a different future, one where mission trips aren’t one-time vacations or photo ops for Instagram, but instead are meaningful and culturally immersive excursions that change the perspective of everyone involved.

“[I know now] that your major doesn’t necessarily dictate your path,” Felipe says. He often shares this wisdom with the church youth but also acknowledges the vital part that studying graphic design has played in his life. “Besides,” Felipe says with a laugh, “[one reason] we’re able to do mission work is the freedom graphic design provides to be mobile. It’s been the root of this whole thing, in more ways than one.”

In March 2020 they had no choice but to cancel their plans. The coronavirus’s continual onslaught meant that the upcoming Onward adventure they had painstakingly planned to explore both Chile and Argentina had to be postponed indefinitely. To make matters worse, Vanesa and Felipe weren’t home when the virus hit — they had recently traveled to California for a friend’s wedding, and it became apparent quickly that they would not be allowed to return to Chile until it was safe to do so.

The reality of the situation felt devastating. Not only were they unsure of when they could return home, but at first, it seemed like the work they had done would be in vain. After all, running a foundation isn’t necessarily as easy as coordinating mission trips through the church. Vanesa explains that while running Onward is incredibly rewarding, it is also “very challenging when you do something on your own. It’s harder when it comes to logistics, finding donations, and planning.”

When COVID-19 hit, the couple had spent two and a half years facing challenges and making connections in South America. But now they were stranded, their next mission trip canceled. What good had their efforts done them and others when they
were now stuck in California with no end in sight?

A lot of good, it turns out.

“We’ve seen God’s hand in this,” Felipe says, “despite this very difficult situation. Sometimes it felt like … should we cancel this whole thing? But then we saw [how we could keep helping].”

Thanks to the groundwork Vanesa and Felipe had already laid with Onward, plus the bonus of modern technology, they have coordinated various projects from afar. “The need is higher now — a lot of people have lost their jobs,” Felipe explains.

“Argentina’s already existing economic crisis is worsening due to COVID-19,” Vanesa continues. “So we’re in communication with all of our friends [in Chile and Argentina], as well as with the pastor from our local Adventist community, to provide essential boxes throughout at-risk communities in remote areas.”

With the help of people like Vanesa’s mother, who runs a grocery store in the area of Entre Rios, Argentina, Onward has created and distributed hundreds of boxes filled to the brim with food, cleaning supplies, and personal hygiene products. With just a few hundred dollars, Onward provided food for 70 families in the isolated Pehuenche indigenous community in the Andes mountains. Through coordination with local families, Onward raised money to help a single mother by sponsoring her seven-year-old child to continue her education at the Adventist academy in Libertador San Martin, Entre Rios, Argentina.

Alongside essentials, Onward considered how young people could cope during quarantine and sent sports equipment, a foosball table, skateboards, music equipment, and speakers to an orphanage in Viale, Argentina. In collaboration with some friends in Santiago, Chile, Onward is giving essential boxes to members of the Haitian community who migrated there after the 2010 earthquake.

In addition to the aid they are providing through Onward, Vanesa and Felipe are still finding ways to do hands-on work in Southern California. As part of another non-profit, the San Clemente-based organization In God’s Hands, they spend time packing and delivering boxes of supplies and food for families in the areas of Riverside and Orange County. In some instances where distance was an issue for delivery, they were quick to think of a different solution. “We sent [some people] a Stater Brothers gift card depending on their need,” Vanesa says, detailing how this was more efficient in some situations.

“And we don’t want to make people feel uncomfortable about charity,” Felipe says. “If we see a need, we view it as [an opportunity to give] a gift that breaks barriers.”

Whether through travel or the simple act of giving someone something they need, breaking barriers is at the heart of what Vanesa and Felipe do through the Onward Foundation. Ultimately, their work is about connecting with people, both church members and non-members, to build a larger and more loving worldwide community.

From their temporary lodgings with Felipe’s parents in Lake Elsinore, Onward’s founders look forward to the day when they can get back to mission experiences. While they are thrilled to be coordinating so many projects from the U.S., they miss introducing young people to mission work, evangelism, and empowering others. Moreover, they are eager to continue interacting with these communities in person and not just over WhatsApp.

“What does it look like to tell someone how important they are?” Felipe circles back to the ever-important question. “It seems so basic, but we’ve found that … being in that moment with someone from an orphanage, clinic, school, or slum is everything. At that moment, you have to make that person feel that God is with them, that they are special, and that we came all this way for you. You are the meaning and priority of this mission experience.”

Finding kindred spirits across the globe through moments like these is essential, Vanesa maintains. “After all, we’re all the same,” she says. “Isn’t it beautiful what you can do when you build relationships?”

The original version of this story was posted in La Sierra University Magazine.