I Want to Breathe 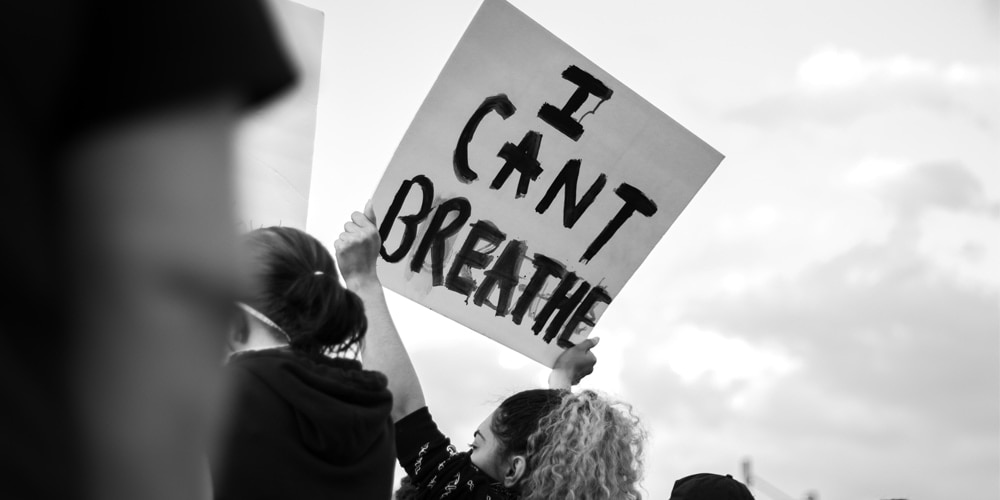 I was born in Birmingham, Alabama, 100 years from the beginning of the American Civil War and five generations removed from slavery.

Our Heritage: Slavery and More

For the United States, slavery remains an albatross: from 1619, when 20 African slaves arrived in Jamestown, Virginia, through the profound words of the Declaration of Independence in 1776, that “All men are created equal”; and on to the war that began April 12, 1861.The nation slaughtered itself over the question of slavery: 620,000 dead; our worst-ever toll of casualties. On the other hand, many slaves were freed for the first time in American history, although their unfulfilled promise of 40 acres of land and a mule made it pseudo-freedom at best.

Fast-forward to the 1960s, when some of the hurdles that crippled progress among enslaved African Americans continued to plague the nation through Jim Crow Laws, which enforced local and state segregation. They resulted in African Americans experiencing substandard living, mortgage loan inequities, unequal pay, and disproportionate health-care coverage.

Many African Americans, including my grandfather, father, and three uncles, served valiantly in the two world wars, although in segregated units. Back home they continued to experience incessant discrimination and segregation in various forms relating to school systems, public transportation, restrooms, drinking fountains, and many other commercial establishments. Segregation seemed to be sewn into the American fabric like baseball and apple pie.

Beyond this, some elected officials worked feverishly to maintain the notion of “separate but equal.” Alabama’s governor George C. Wallace in his 1963 inaugural address touted, “Segregation now, segregation forever” to an enthusiastic crowd that applauded his message.

Sadly, many of these same issues are evident in 2020. George Floyd’s death on May 25 in Minneapolis, Minnesota, captured the world’s attention as one of the most inhumane acts we have seen: a police officer’s knee forcibly positioned on Floyd’s neck as he calls out some of his last words, “I can’t breathe”; words that have become a platform for social justice advocacy and protest.

Floyd’s death is a wake-up call for the United States and beyond, prompting thousands to protest current and past horrors of injustice and oppression. Societal ills have helped to shape today’s ideologies. A better, brighter future requires being intentional and purposeful about creating a hospitable environment for all. Our children and grandchildren will judge our present actions. Let us show that we can stand united on principle.

I challenge men and women of every ethnicity to be true to themselves, to speak truth to power, to be the voice for those without a voice. Martin Luther King, Jr., wrote from a Birmingham, Alabama, jail, April 16, 1963: “Injustice anywhere is a threat to justice everywhere. We are caught in an inescapable network of mutuality, tied in a single garment of destiny. Whatever affects one directly, affects all indirectly.” Protesting youth in America’s streets seem to understand that. How shall we support the cause of righteousness and justice?

What Shall We Do?

1. Begin by taking a stand on our knees. It’s called prayer. Prayer moves mountains, tears down walls, and builds bridges of hope for the future. In prayer we talk with the God who’s “got the whole world in His hands.” We must both pray and work with Him for the positive change each heart and all the world so desperately need.

2. Demonstrate compassion to all humanity. Jesus says, “love the Lord your God with all” of you, and “love your neighbor as yourself” (Matt. 22:37-39).* Such love will not judge and punish anybody because their hue is different. There is no room for racial intolerance in God’s family: “Neither Jew nor Greek, there is neither slave nor free, there is neither male nor female; for you are all one in Christ Jesus” (Gal. 3:28).

3. Exercise your right and civic duty to vote.Voting honors those who sacrificed to achieve passage of the Voting Rights Act of 1965, which dismantled many barriers to constitutionally guaranteed voting rights.

4. Be change agents.Start with building strong, sustainable relationships with key stakeholders—police departments, state and local government officials—well in advance of crises. Mahatma Gandhi admonished: “Be the change that you wish to see in the world.” Without change we risk complacency and stagnation. On the other hand, change agents are ready to create new and better things.

5. Advocate for justice. The Boston Tea Party was a political protest against an injustice imposed by England: “taxation without representation.” As a result, the Constitution’s first amendment now guarantees that “Congress shall make no law” abridging the freedoms of worship, speech, and of the press, as well as the people’s right “to assemble, and to petition the Government for a redress of grievances.” Silence may have its place, but so does the voice in favor of justice.

6. Seek unity within our nation. Setting aside divisive thinking and behavior, we must work together to honor the words of the nation’s great seal, “E pluribus unum”: “Out of many, one.”

7. Dialogue, publicly and privately, in order to obtain a better understanding of the history of pain, hurt, and fear inflicted by systemic injustice in America. While this may require difficult conversations and protest at times, attentive and reflective listening by all is essential to achieving the most favorable outcomes.

8. Commit ourselves to love and work together through God’s almighty power. We are preparing to enter His kingdom, where we will all stand together, an innumerable multitude “of all nations, tribes, peoples, and tongues” (Rev. 7:9).That thrilling sight reveals the fulfillment of Isaiah’s wonderful vision in which “nation shall not lift up sword against nation, neither shall they learn war anymore” (Isa. 2:4).

Washington Johnson II is assistant director of Adventist Chaplaincy Ministries for the North American Division of Seventh-day Adventists, and a captain in the United States Navy.