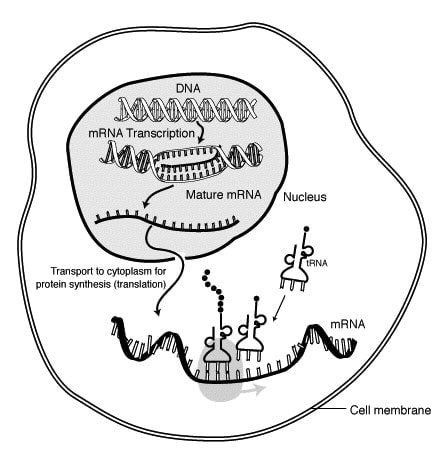 Q:There’s a lot of talk about mRNA vaccines. I don’t even remember this stuff from school. Can you explain using easy-to-understand terminology what mRNA is and what it does?

A:There is a lot of conversation about this today. We will try to answer simply and in nontechnical language whenever possible.

Each regular cell in our body has a nucleus and a cytoplasm. The nucleus is like a vault that has the encoded blueprint for the life of the cell,
DNA (deoxyribonucleic acid). DNA never leaves the nucleus. The nucleus is surrounded by a highly selective membrane that controls what leaves and enters through its pores.

One of the most important ways that the nucleus directs what happens in our cells is through the instructions sent by a courier called mRNA (messenger ribonucleic acid). Actually, mRNA is a transcript, or copy, of the encoded instructions from the DNA and is able to leave the nucleus and travel to one of the many protein factories in the cytoplasm called ribosomes. The mRNA information, in addition to its code for making the protein, has instructional tags that determine when, where, and how much of the protein is to be made, for example, how many times the specific mRNA message is to be translated. The ribosomes read, or translate, the code on the mRNA and produce the protein that it’s instructed to make and in the quantity that’s required. After the mRNA strand is translated the required number of times, it’s destroyed. This allows the ribosome factories to make other proteins according to the other “mRNA couriers” that get to the factory. There are other kinds of RNA; all are important because without them we can’t make the proteins essential for life.

Specially coated mRNAs in modern, high-tech vaccines are taken up by cells at the site of inoculation. The vaccine’s mRNA code instructs these cells to produce
viral surface proteins, which in themselves don’t cause disease. The immune system processes these cell-fabricated viral proteins as “foreign” and launches a response against them with antibodies and virus-killing immune cells. When the real virus presents itself, the primed immune system recognizes it by the same protein on its surface and unleashes an arsenal of weapons (including antibodies) to fight against it and protect the body from or reduce the effect of the viral invader. Currently available information indicates that vaccine-derived mRNA acts in the cytoplasm and neither enters the nucleus of cells nor interacts with or affects the person’s DNA (blueprint in the vault). Certain viruses (e.g., retroviruses such as HIV) and DNA vaccines, however, may incorporate their genetic material into a cell’s nucleus. We can discuss this in a future column.

God, our God, the Creator, is God of true science.