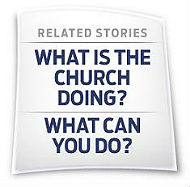 BY ADDISON HUDGINS
When I was in high school, I hated going to church. Having attended Adventist church and school all my life, by the time I was a senior, I felt like waking up for Sabbath school and church was just another morning of sitting through Bible class.

“What can we do to draw you in?” trusted adults would ask. I never had a profound answer. I’m not jumping ship, I’d often think. And I don’t think the majority of my peers are either. Your lesson plans are fine; the service is fine. Maybe we’re just sick of being talked to and not talked with.

Friends creepingly became less and less interested in church. Like a mold that spores seemingly from nowhere, peers began influencing peers and more and more dropped off. But none had a fight with a church member. None professed that a huge rift had been created.

For a long time I’ve wondered why some of my peers have stopped attending. I decided to sit down and ask them. In doing so, I had some epiphanies about church myself. In fact, writing this article only reinforced that I am not going to quit attending church anytime soon.

What’s the Difference?
According to recent polls, seven out of 10 Protestants ages 18 to 30 quit going to church by the age of 23—even though these individuals attended church regularly in high school.1 Among the millennial generation (those born after 1981), more than one quarter claim no religious identity, and the numbers are climbing.2

I’ve heard lots of church members make sweeping statements: “Our young people are leaving the church in droves”; “We need to reinvent our services to inspire young people.” The fear tends to be that young people are neglecting their spirituality and have ceased to want relationship with God. This is a valid fear; salvation is a life-or-death issue. But in reality many young people are not attending church. This is not the same as turning their backs on God.

Many are like George,3 a now-active Adventist who didn’t attend while in college. “I never stopped praying or connecting with God, and, funny enough, I never stopped paying tithe. . . . The expectations that people have can be overwhelming.” All but one person interviewed for this article—from ages 20 to 66—still prayed and connected with God, even when not attending church.

A study citing the 2008 Pew Religious Landscape Survey of 35,000 people and the General Social Survey, by the National Opinion Research Center at the University of Chicago, found that while young adults are less likely than their parents were at their age to attend church, the generations don’t differ vastly in other areas. Among the millennial generation, 40 percent say that religion is important to them, as compared to 39 percent of their grandparents’ generation at the same age. Forty-one percent say they pray every day, and 53 percent are “certain God exists”—percentages similar to that of their parents’ generation at the same age.4

The Good Shepherd
With this in mind—that having a relationship with God and attending church are not necessarily the same issue, church is not meaningful unless we first commune with God. Just as we are the arms and legs and mouth of His body, He is the heart, the breath, and the lifeblood of the church. But there is a difference between communing with God privately and connecting with Him in a group at church.

Thus, young adults who think that sitting in the pew on Sabbath is the primary way to connect with God—the way to cultivate their personal relationship—end up disappointed. We should be learning to commune with God on an individual level on Sunday, Monday, and every other day. When we come to church, it should in part be because we already have a relationship with God and want to show our respect, love, and honor for Him.

Rich Carlson, chaplain at Union College for the past 30 years, believes that some young people need to “reassess their reason for church. Church is for community and what I can give back. . . . I strengthen myself all week, so I have something to give back to God in worship and to my fellow spiritual travelers on their way to the kingdom.”

Luke 4:16 says that Jesus attended the synagogue, “as was His custom.”

In Luke 15 Jesus shares the story about the good shepherd. The lost sheep did not find its way back to the stall where the shepherd was waiting, glancing at his watch and tapping his foot. No, the shepherd dropped everything on his agenda to find that one sheep.

Jesus finds us where we are. We don’t have to enter a church in order to be found by Him.

Attending for the Wrong Reasons?
Let’s dig a little deeper. We shouldn’t go to church to commune privately, but should we go to church to get something for ourselves? Should we go to “gain a blessing”? Or, as Carlson suggested, is going to church our giving back to God, a God we already know and love because we have spent personal, alone time with Him?

Caleb grew up in the Adventist Church and used to be heavily involved in youth group ministries and services. He even considered studying theology to become a youth pastor.

When he moved away to start a new job, he decided to “church-shop” a little.

“I remember one [church] in particular,” he told me. Because most of their regular members were in Atlanta, the church was doing a live feed of the General Conference session service in lieu of preaching.

“They couldn’t get the sound working,” Caleb told me. They asked if anyone knew how to help. “So there I was, first time there, nobody knew me, and I was up in the sound booth trying to fix the sound for them.” After the feed started to work, Caleb was fed up himself, and, feeling slightly used, he left.

“I wasn’t getting anything out of it,” Caleb explained. “Did I get anything from it spiritually? No.”

Personal communion is vital and nonnegotiable. Only when we have let God find us, and we start a friendship with Him, will the church experience be a natural, meaningful outpouring of our affection. Only then can we be part of a community of believers.

Wading in the Kiddie Pool
“I think I have just grown out of the church,” a friend once said. Outgrown the church?

Kenda Creasy Dean, in her dissertation “Practicing Passion,” uses the concept of a pool as a metaphor for understanding God and theology. Children grow up in the shallow end, but if there is no trusted adult beckoning and pulling from the deep end, they get “too big” for the shallow end.5 They tire of wading in the kiddie pool, so they stand and walk away.

“[We sometimes] communicate a faith that has no analogy in the adult church,” Dean writes. “Christian identity requires redundancy as well as revelation, a daily rhythm of grace that may or may not be punctuated by ‘spiritual highs.’ ” 6 Spiritual highs last only for so long—and then searching young adults want to find answers to the tough questions. But what happens when nobody wants to address doubt?

As one young adult expressed, “I always felt very guilty when I had questions I wanted to ask.” We need to cultivate critical thinking skills and not discourage young adults from questioning. When we avoid challenging Bible passages or brush off difficult questions, we do the questioner a disservice, and we do God a disservice. God is the one searching for us—which means He is big enough to handle our doubts and discouragements.

The Holy Spirit Still Courts Us
Sometimes the devil’s tactics are stronger than we realize, especially when he sees potential for God’s kingdom. Thus, he works 10 times harder on young people, the future of the church.

It’s important to remember, however, that though the devil works hard, God works harder.

Vivian, now 66, fits exactly with the conundrum of knowing what’s right but not doing it. When Vivian was about 20, she quit attending church, even though she had been baptized at 9 and was “determined not to ever, ever sin again.” However, while she didn’t attend church, she remained convicted of the Sabbath, refusing to even accept a job offer that would require work on Sabbath.

“In retrospect . . . the Holy Spirit was still courting me,” she said. About 11 years after she stopped attending, she and her husband learned that it was possible he would be transferred to another job. “I prayed and prayed, ‘Lord, if You will allow him to get this job, I will totally come back to You,’ ” she told me. “ ‘I will go to church,’ I said, ‘I won’t have another drink, I’ll do everything just like I’m supposed to do.’ . . . [I knew] that if I got away from all my friends and all my influences where I was, if I started over, so to speak, then I could make that commitment and keep it.” Her husband got the job.

The first Sabbath after they moved, her husband asked her, “Well, are you going to go to church?”

“I told him, ‘There are just some promises you don’t break’ ” she said. “And I haven’t missed since.”

Looking to the Future
Each story is different. Sorting through this web of reasons for leaving church is challenging and daunting and exhausting. But it is worth it. It is important to search for the “why” in the face of difficult questions, and to encourage our young people to do the same.

Many young people who don’t attend church are not “jumping off the ship” of Adventism. After listening to my peers, instead of focusing on the “Bible class” portion of a service, I now attend church proud of honoring the God that I serve, and intend to do so for many years.

Instead of focusing on the flaws we see, each of us needs to gather the courage to look in the mirror and ensure that we make the number of those who are panicked or discouraged one less. It is up to each person to decide to have a relationship with Jesus, to ask the tough questions, and to attend church.

But because young people do struggle, and wander, and run away every so often, we the church must have faith that the Good Shepherd will seek them out again. He will. And that is a light for the future worth praising Him for.

______________
Addison Hudgins attends Union College, where she is studying English and Journalism with a music minor. She wrote this piece as a summer intern for Adventist Review. This article was published April 19, 2012.