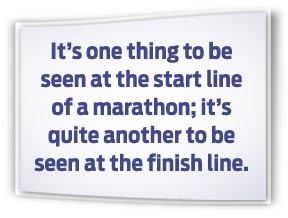 BY DAVID ASSCHERICKTwenty-six point two miles. 138,435 feet. 1,661,220 inches. There are many permutations, but the distance remains the same: long.

Then suddenly it’s three weeks away. Not three months—three weeks! Somehow I resist the urge to panic. Sure, I’ve trained, but I know inside not enough. Nervousness starts to set in, and I begin to contemplate rescheduling or canceling altogether. But how would I break it to my training partner, Gerard? Or to my younger brother, Robert, who’s training faithfully so he can run it with me? Then there are the dozens of people I’ve told confidently and a little too proudly, “Yup, I’m running a marathon on December 5.” How could I face them? And how could I face myself?

So I cancel my cancellation plans.

I run my last long training run two weeks before the big day. It’s 15 miles, and I feel great the whole way. Confidence begins to build. But my confidence, I know, is a bit of a trick I’m playing on myself. I know both psychologically and mathematically that there’s a considerable difference between 15 and 26.2. I also know that the first three months of my training regimen went better than the last three.

At first there was the enthusiasm and the excitement of setting the goal. I was neither dissuaded nor discouraged by some of my friends’ apathetic amusement. I remember, for example, when I first told my best friend, Nathan. “You’re just having a midlife crisis,” he announced, “and when men have a midlife crisis they either buy a Harley or run a marathon.”

His dismissive words served only to further cement my resolve.

The first three months of training were a glorious, exciting blur. My lungs and legs were strengthening rapidly. My times and distances were ahead of schedule. My first race, a preparatory half marathon, went really well.

In fact, I think it went too well. In retrospect, I now know it put me at ease. I began thinking and saying really foolish things. Such things as “I feel great; I could run a sub four-hour marathon tomorrow.” I mistakenly assumed that a marathon would be exactly twice as hard as a half marathon.

It was a mistake I would soon regret.

So my training regimen took a hit the last three months. I ran a little less and I ran a little slower. I fooled myself into thinking I was fitter than I was. I skipped some long runs and some speed work. More than a few times I stayed in bed, under the warm covers, rather than going on my morning training run. I began to coast. I let yesterday’s success lull me into a false sense of security about today’s fitness.

Then I blinked, and race day was three weeks away. I called an experienced local runner to ask him what my goal time should be. He was unimpressed by my hopeful estimates. Then he said ominously, “The goal of your first marathon is just to finish.”

I thanked him and hung up the phone. His words hung in the air like a bad smell.

Reality was fast sinking in. I spoke to other runners. They all echoed the same sentiments. “You just don’t know what your body is going to do at mile 20,” Tony warned. “The cumulative trauma of 26.2 miles is no joke,” Tim added. I was reminded that according to the Marathon legend the distance’s first runner, the Greek soldier Pheidippides, died after delivering the good news that the Greeks had defeated the Persians on the battlefield of Marathon.

I swallow hard and make my way onto the bus. The day is here. I sit mostly in silence as the bus travels 26.2 miles away from the hotel. It is 5:00 in the morning. Tossing and turning, I had slept perhaps four hours the night before. As the bus motors down the highway, Gerard keeps remarking how far and how fast the bus is traveling. I say nothing. Too soon, I’m surrounded by thousands of other runners, and there’s less than a minute to the start. It’s here that I understand perfectly, if too lately, that looking the part cannot make up for a lack of solid preparation.

The horn sounds, and thousands of runners shuffle off like the migrating wildebeests of Africa’s dusty plains. Thousands move as one. I press the start button on my watch, take a deep breath, and begin my journey back to the hotel.

To my pleasant surprise, the first half of the race goes flying by. I feel good, even great. My mile splits are fast, but not too fast. I’m on schedule for a great first marathon. Then it happens. Just before mile 16 my legs go into full-blown Lucifer mode. It’s all-out rebellion as my legs, rather against my will, stop running. Quite suddenly I’m just standing there in the middle of the road, runners streaming by the dozens past me. I stretch my calves and try to run. Not happening. I try to walk. Barely happening.

Then there are the cramps, followed by the pain. I can feel my marathon slipping away from me. In terror it dawns on me that I’m still more than 10 miles from the hotel. I walk haltingly for the next hour, mainly because I don’t know what else to do. Runners continue to stream past by the hundreds. I try again and again to run. Still not happening.

So I walk, and I wince. All I can think about is my last three months of largely careless preparation. I chasten myself for not maintaining the same level of discipline and enthusiasm with which I began my training. I begin to see the spiritual implications immediately. In fact, it’s all I can think about. With each labored step I wonder if I’ve tricked myself similarly about my spiritual condition and fitness. It feels almost as if this whole thing has happened just so I can have several uninterrupted hours to really examine my spiritual condition.

As soon as this thought occurs to me, I cannot shake it.

There is no substitute for preparation. It’s one thing to be seen at the start line of a marathon; it’s quite another to be seen at the finish line. A finisher is mostly made alone. It happens on long, lonely runs, in early misty mornings, during tiring track sessions, and while shivering in the ice bath (no kidding!).

When it comes to running a marathon, image is one thing, but substance is another.

So, too, with Christianity.

Speaking of the scribes and Pharisees, Jesus said that though they desired to be “seen by others” as righteous (Matt. 6:5; 23:5),1 they were actually “full of dead people’s bones and all uncleanness” (Matt. 23:27). He then added, you “outwardly appear righteous to others, but within you are full of hypocrisy and lawlessness” (verse 28). By contrast, the psalmist spoke of “truth in the inward being, and . . . in the secret heart” (Ps. 51:6).

The Pharisees were all about image. God, though, is concerned primarily with substance. It’s the difference between the outside and the inside. The outside, religiously speaking, is easy and comparatively meaningless. The inside—true, heart religion—is what really matters. A substantive and transformative change on the inside will always produce a corresponding effect on the outside. The converse, though, is not true.

Spiritual health and fitness are procured, largely, alone. The individual soul alone with God—“the work of preparation is an individual work,” wrote Ellen White.2 This is where real religion—“realigion,” if you like—is to be found and fostered. End-time spiritual heroics, like marathons, don’t just happen in a vacuum. They require time and energy before the shining spotlight flicks on. They require personal preparation.

Am I ready to run this race? Are you?

Am I kidding myself about my own spiritual condition? Are you?

These are the right kinds of questions. And Jesus is the right answer! “Therefore . . . let us run with endurance the race that is set before us, looking to Jesus, the founder and perfecter of our faith” (Heb. 12:1, 2 ). Because again, it’s one thing to stand at the start line and quite another to stand at the finish line. Don’t be satisfied to look like a finisher. Be a finisher!

1 Scriptures quotations in this article are from The Holy Bible, English Standard Version, copyright © 2001 by Crossway Bibles, a division of Good News Publishers. Used by permission. All rights reserved.
2 Ellen G. White, The Great Controversy, p. 490.

_______________
David Asscherick is the cofounder and director of ARISE, a ministry training center located in Sonora, California. He is a regularly featured speaker on 3ABN and Hope TV. This article was published in the January 13, 2011, Adventist Review.