n response to the world financial crisis, Pope Benedict XVI has called for the formation of a “true world political authority.” This new “authority” would enforce global economic, environment and immigration policies to help construct a social order that “conforms to the moral order.” The call comes in the pope’s recently released encyclical, entitled Caritas in Veritate, or Love in Truth.

Such language seems to reflect predictions that Seventh-day Adventist have made for many years that at a time of international crisis, religious leaders would call for international enforcement of moral rules and standards. Is the Pope’s recent letter a fulfillment of those predictions?

A full reading of the letter is needed to answer this question. Much of the letter contains materials that Adventists along with most Christians would agree with.  It examines the current global economic and political order, and criticizes it for creating too great a divide between the rich and poor, between the haves and have-nots. 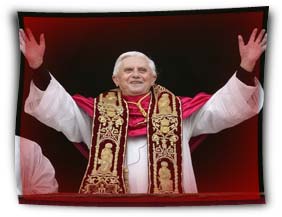 Much of the Pope’s social justice concern reflects well the message of the book of James, which rebukes the rich of the world in the last days for oppressing and misusing the poor (James 5:1-6).  The Pope’s critique of unrestrained, unregulated capitalism, and his call for ecological and community stewardship by businesses and corporations echoes the ethos of the prophets of the Old and New Testaments.  His call can be a reminder to all Christians that our ethics and responsibility do not stop at the church steps, or once we have paid tithes and offerings.  We need to take our ethics of stewardship, sharing, and caring into our daily lives and businesses.

We can also appreciate his cautioning that rights cannot be pursued and promoted in the absence of related duties.  He notes correctly that with freedom must come some measure of responsibility, or the very conditions of freedom will disappear.  We also welcome his acknowledgement of the importance of religious freedom and the threat to it by states and regimes that promote secularism, and wish to marginalize religion in society and the public square.

But we are concerned when the Pope, a religious, spiritual leader seeks to advise the governments of the world on the creation of a worldly, political entity that will implement global political, economic and moral policy through force and coercion.  The Pope is clear on this latter point.  He says that his proposed “political body” should be “vested with the effective power to ensure security for all, regard for justice, and respect for rights. Obviously it would have to have the authority to ensure compliance with its decisions from all parties.”

Jesus Christ, whom the Pope claims to represent here on earth, very clearly said that “kingdom was not of this world: if my kingdom were of this world, then would my servants fight . . . but my kingdom is not from here”  (John 18:36).  A political body “vested” with “power” to ensure “security” and “compliance,” as the Pope recommends, will obviously have to use a police or military force.  What qualifies the Pope to make recommendations or suggest policies for the creation of such an entity?

A centralized, armed global authority would represent a significant collection of power and authority.   As we know from history, and we are reminded by the Catholic historian and thinker, Lord Acton, “power corrupts, and absolute power corrupts absolutely.”  It would seem unwise, based on human experience and wisdom, to vest a central, global traffic cop with sufficient power and oversight to police the world.

Some may argue that the Pope is not suggesting he or his church be in charge of such an authority, but rather proposing that some other body take these steps to stabilize our world economy.  And yet this cannot be the full argument.  The letter makes clear that the policies carried out by the entity would be to construct a “social order” that “conforms to the moral order.”  The Pope’s choice of words is telling.  He does not say “some moral order,” or “a moral order,” but “the moral order.” He clearly has a certain moral order in mind.  Could this be any other moral order than the one articulated and taught by the Catholic Church? The actual governing and wielding of the sword, or rifle, or bayonet, of the global authority might be by non-religious, state powers.  But it would seem that the Pope must envision that they would do so with some connection with Catholic Church leadership, or teaching, or both.  It cannot be that the Pope is calling for the creation of an authority and the implementation of a social and moral order, and then he plans to have no role, or say, in how it is to be implemented.  Evidence to support this is virtually the entire history of the Middle Ages, where classic Catholic teaching called for a distinction between church and state, but with a full cooperation, where the state wielded the sword on behalf of “the moral order” of the church.

Given this history, and the abuses that flowed from it--including the Crusades, the Inquisition, and the war on heretical groups such as the Waldenses--it seems unwise for the Pope to thrust himself into the role of lead counselor on the enforcement of an economic, social and moral order.  But given prophetic insights, it is not unexpected.

So does this letter fulfill Adventist predictions of an end-time enforcement of international religious morality?  No, not yet. This letter is just talk and ideas.  But talk and ideas are meant to lead to action.  And during times of calamity and crisis, ideas that would usually be ignored often gain more traction. The consequences and impact of this letter bear close watching, as the cost of liberty is constant vigilance.