From time to time the Adventist Review presents opinion pieces on a wide range of issues. The following article presents one perspective. -- Editors

illow Creek Community Church located in suburban Chicago has become one of the most influential evangelical churches in America. Giving birth to the “seeker-sensitive” church model with its emphasis on attracting large numbers, it has helped shape the ecclesiology of a generation of pastors and church leaders. Willow Creek has also been the recipient of much criticism from many fellow evangelical leaders. Critics argue that the “seeker-sensitive” approach has produced the proverbial church that is “a mile wide and inch deep” referring to its lack of spiritual and theological depth. I tend to agree with this criticism.                                                                  [Main Story]
Of course, this criticism requires some qualification. The phrase “a mile wide” implies that despite any other shortcomings the Church is still growing, when according to the American Religious Identity Survey, Christianity is actually shrinking in America. And regardless of the numbers, there is no question that Christianity no longer exerts the same influence on culture that it once did. Furthermore, while mega-churches appear to be popping up on every corner, smaller churches are closing in record numbers. It could be argued that the mega-church rather bringing more people into the Kingdom is really only driving smaller churches “out of business” and consolidating Christian “consumers” in much the same way that Wal-Mart impacted small businesses. 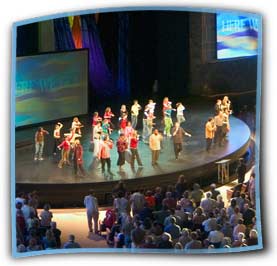 Recently, Willow Creek published the results of their 2004 congregational survey entitled, Reveal: Where are You? The surprising results required the study’s authors, including executive pastor Greg Hawkins, to tell senior pastor Bill Hybels (pictured below) that “the church isn’t as effective as we’d thought.” In the Forward to the report, Bill Hybels makes an astonishing [and I think humble] admission, “…parts of the research did not shine brightly on our church. Among the findings, nearly one out of every four people at Willow Creek were stalled in their spiritual growth or dissatisfied with the church—and many of them were considering leaving.”
In the report, Willow Creek acknowledges that they have long-employed the “The Church Activity Model for Spiritual Growth.” Essentially, the premise was that as “a person far from God participates in church activities” they will eventually become “a person who loves God and loves others.” Now, this could mean any activity--whether it be directing traffic in the parking lot or volunteering in the nursery. I call this the “faith by osmosis” approach—the idea that as long as people are in the church environment, they will grow spiritually.
To their credit, Willow Creek asks and answers the question as follows: “Does increased attendance in ministry programs automatically equate to spiritual growth? To be brutally honest: it does not. …Church activity alone made no direct impact on growing the heart…”
The problem begins when you embrace the belief that in order to attract people “far from God,” the church and all of its practices and traditions should change in order to avoid those things that outsiders may feel are “turn offs.”  Once embraced, this would dramatically alter worship, preaching and ecclesiology in general. Under this new paradigm, everything in the institutional church that was formerly directed toward and reserved for those who were baptized believers was now redirected toward unbelievers or, in Willow Creek’s language: “seekers,” thus the term “seeker-sensitive.”
Practically, this would mean that traditional expository preaching, which emphasized theology and doctrine would be replaced with topical preaching addressing the felt needs of the listener. Worship would center more on the audiences’ experience and satisfaction rather than the glory and majesty of God—not that both can’t be achieved, but the former should follow the latter. And discipleship would be replaced by large-scale programs designed to train and deploy the newly “saved” in simplistic evangelical techniques and “programs.” In the end, the KISS method (Keep It Simple, Stupid) tends to govern everything, further adding to the anti-intellectual spirit that has rendered the contemporary American Church largely irrelevant.
The shortcoming of this approach is made apparent in the fact that the “most dissatisfied” group within the church, according to the survey, was those considered to be the most spiritually mature. Their chief complaints? “They desire much more challenge and depth from the services” and “60 percent would like to see more in-depth Bible teaching”—the very things that the seeker-sensitive model diminishes. Just to be clear, I do not think that Willow Creek or any other seeker-sensitive mega-church is, or was, purposely trying to undermine the church or water-down the gospel. Quite the contrary, I am willing to believe the best: that these new methods and techniques are genuinely motivated by a desire to “go out and make disciples.” Unfortunately, that has not been the case and this is, to some extent, Willow Creek’s realization.
While I don’t agree with all of Willow Creek’s interpretations of the survey results or the “consumer research” approach to ecclesiology, I do nonetheless appreciate Willow Creek’s courage in coming forth with revelations critical of their approach to ministry. This is honest and reveals what I can only believe is a sincere desire to serve Christ and His mission in the world better.
I do still think there is a whole way of thinking about Christianity in America and what we understand the church’s mission in the world to be that demands serious critique and reformation. For one, the Willow Creek report reveals that prior to this survey they believed that “spiritual activity” produced spiritual growth whereas today they understand that “spiritual growth is all about increasing relational closeness to Christ.” In other words, it’s all about following Jesus! I wonder how many other churches have missed this essential point!
It remains to be seen what Willow Creek and the followers of this model will do with the critical information revealed in this survey. It could prove instrumental in bringing about real and needed reformation in the American Church. I pray that is the case. Certainly, it will take great courage, strength of conviction and humility to confront the serious questions raised by the results. We should all be in prayer for Willow Creek and all of those who have followed her model as they wrestle with their response to these challenging revelations. I am personally thankful to my brothers and sisters at Willow Creek for their transparency. I pray all of us would examine how we “do church” and look once again to Scripture rather than “marketing experts” for guidance in carrying out the Church’s mission on earth for the glory of Christ.
__________
© 2007 by S. Michael Craven. This article was republished with permission and cannot be reprinted or posted on other websites without the permission of the Center for Christ & Culture.
Advertisement
Advertisement