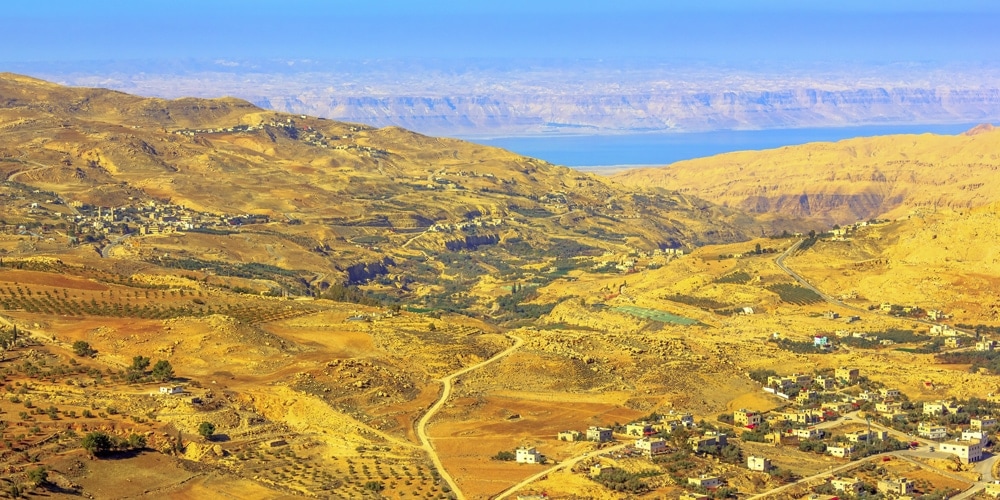 At the threshold of the Promised Land, the Israelites stood on the brink of a new horizon—perhaps in some ways not unlike where we find ourselves at the start of 2021. An entire generation of the people who had left Egypt had passed on, leaving only younger ones with no mature memory of Egypt, somewhat like college students today with no mature memory of life in a pre-9/11 world.

Heshbon, in Jordan, which my wife and I visited during our courtship days, was one of the last stops before the Hebrew people came to the Jordan River. It was a significant point in their journey, a time of both good and bad news. The good news: they were about to claim their permanent home! Having moved a lot myself, I imagine their excitement at finally finding a permanent place to call home. The bad news: they were heading for these major changes without Moses!

At 120 years, Moses, humblest yet wisest and most experienced of leaders, was as old as one can possibly get. God tells him that he will not be going into the Promised Land: he will die alone in the wilderness.

Can you imagine Moses being told, “You shall not cross the Jordan”? Can you imagine the heartbreak? After investing his whole life in helping and saving his people from Egypt, the wilderness, and themselves, he will not be able to see the climax of his work. Yet, I find it inspiring that when God tells him that his term is over, Moses does not ask for a “recount.” In fact, Moses certifies his successor by ordination. It shows his humility, his recognition that we are not the heroes of this world. God is! He is the covenant-keeping God, keeping His promise to Abraham and his descendants that He will always take care of them.

No matter how important or influential we may be, God is history’s hero. Forgetting this has caused me unnecessary stress as a leader in the past as I invest myself in trying to save everything, including losing sleep—something that hardly helps anyone to be a more effective leader. I know now that I can care without breaking under the burden, because the burden belongs to God. He will save His people.

As Moses’ benediction speech reminds the people, “Blessed are you, Israel! Who is like you, a people saved by the Lord?” (Deut. 33:29).1 Israel would never be left alone. Neither will we: their Savior is ours too.

During this pandemic many are dying alone because of logistical complications caused by the contagiousness of the coronavirus. But at the end of life everyone ultimately goes to the grave alone. Sin’s tragedy brings death to all of us (see Rom. 6:23). Even the best of us, like Moses, die. For Moses it was on Mount Nebo: alone. And death’s utter loneliness also reminds us that we must all, individually, stand before God.

Being Alone, Yet Not Alone

As Moses climbed Mount Nebo he probably thought about all that he had done through his last hundred years. Only Joshua and Caleb would eventually remain of the adults who had left Egypt. Moses may have wondered if his life had been in vain.

As he stood on Mount Nebo, he could see the Jordan River valley below and look out over the expanse of the Promised Land. In vision, God showed him all that would happen to the nation of Israel. He saw coming apostasy. He saw Israel’s coming captivity.

Yet, Moses also saw the coming Messiah, Jesus. The Messiah, too, would die alone. On a cross. And like Moses, Jesus contemplated the panorama of history and saw the people He was saving. Both He and Moses were comforted by the fact that their lives served the highest of purposes. As God’s servants, we, too, may be comforted by the fact that God remembers us: we are not alone; our lives are not in vain.

Moses’ death was also a reminder for the people that the only leader guaranteed to provide the help we need is God. Jesus reminds us that “as Moses lifted up the snake in the wilderness, so the Son of Man must be lifted up” (John 3:14). COVID-19 has helped to teach that no one but He deserves that pedestal.

Israel reached their destination, but they lost their great leader. We, too, face both better and worse times. We are ready for both if we are committed to remain focused on the Son of man lifted up so we all may see and be drawn to Him.

The edge of the desert is no place to insist on preserving the status quo. God commands us to be courageous, because “the LORD your God goes with you; he will never leave you nor forsake you” (Deut. 31:6). Moses must have understood the danger of inertia: he urges his people into the future, repeating three times in this chapter, “Be strong and courageous” (verses 6, 7, 23).

I once heard of a professor who assigned students a five-page paper on courage and examples of courage. One student earned an “A” for submitting five blank pages—courageous student, I guess. I do know that courage does not erase the possibility of failure. Courage means that we keep moving forward, regardless.

Joshua had good reasons to be afraid. First, he was not Moses; and second, he had no boats to cross the Jordan River. But Joshua trusted God, and God provided a way across the river that would renew Israel’s confidence in His power. Everyone knew that it was humanly impossible: “At this time of the year—in the spring season—the melting snows of the mountains had so raised the Jordan that the river overflowed its banks, making it impossible to cross at the usual fording places. God willed that the passage of Israel over Jordan should be miraculous.”2

But Joshua was ready and called the people to readiness. He commanded: “Consecrate yourselves, for tomorrow the Lord will do amazing things among you” (Josh. 3:5). There’s so much God is willing to accomplish through and with us if we’re willing to let Him.

When I was about 22 years old, I somehow became my little home church’s head elder. Our Spanish church that shared the facility had a new “baby” Christian named George. George had a lot of excitement and faith. He wanted our church to host a public service fair to honor our community’s public servants, such as police officers and firefighters, one year after 9/11. I scoffed, “Are you kidding? Our church is so small, we could never do anything like that.”

Well, George persisted anyway. He asked me to translate letters to the community. I went along—reluctantly. Somehow, George’s fair came about. On the morning of the fair, I stood outside the church with our small church board group. Ambulances and fire trucks pulled into the parking lot to set up. Board members complained: “I can’t believe this. We’ve never had an event with bouncy castles on our church property!” I worried: Would anybody show up?

At the end of the day, the captain of the police force came up and shook my hand, “Thank you so much for honoring us today.” I had to sheepishly reply, “Don’t thank me, thank George. It was his idea.”

George’s event taught me that the only ones who stop God from working miracles are us. For Him to work all we need is to be willing—willing to move forward in faith, willing to embrace change, willing to risk failure. If we are willing, God is willing and able. There’s so much God can do through us if we are willing to just
let Him!

As we face our Jordan Rivers, we are bound to make mistakes, but we have a Savior who will recover us from drowning. As we near the end we will go through tribulations, but we have a comforter who will walk with us. Let us “be strong and courageous” as we move forward into the future. Let us accept and embrace change: our God is watching over us.

Reimagining Faith
The Limits of Excarnational Truth
Is the truth ever fully communicated apart from our embodiment of it?