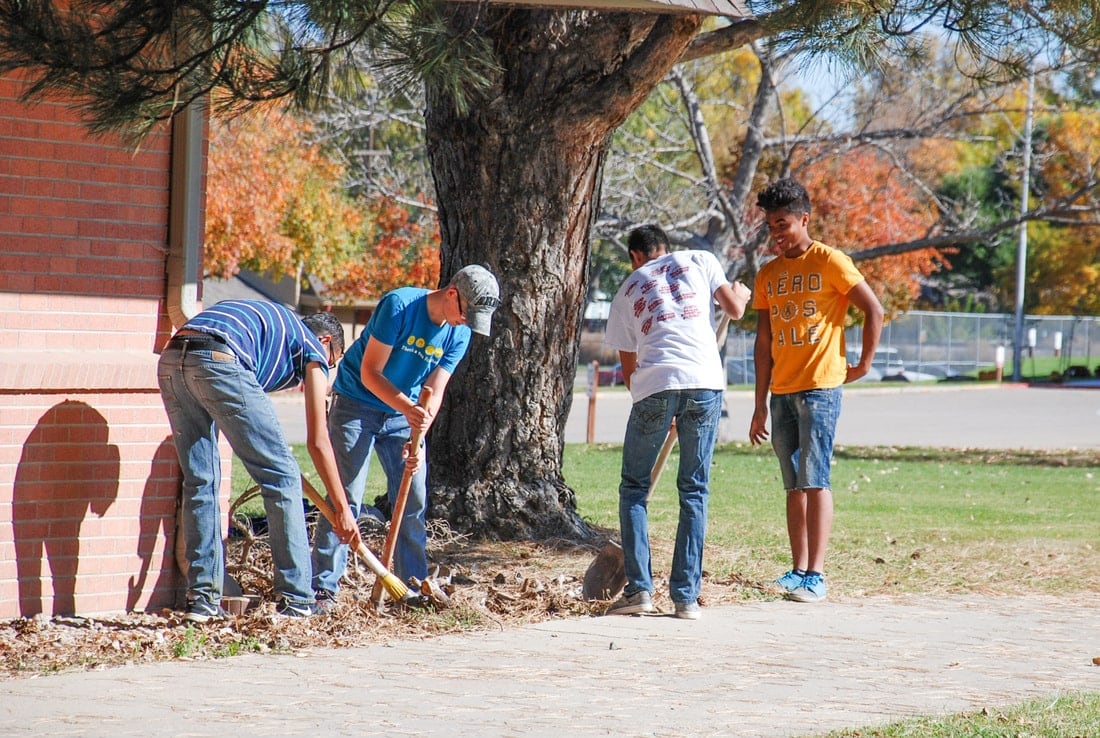 Their primary purpose was to complete the walls on the second floor of Imara Daima Adventist Academy, located in a neighborhood of Nairobi. As the walls were built, young volunteers’ lives were changed, trip leaders reported.

About 700 students attend the Nairobi school, and around 40 students must fit into each small classroom. “The school already had three floors, but the walls had been made of just sticks and tin,” Kast said. “This is the typical building material in this area if one cannot afford cement or bricks.”

After the first few days, the group volunteers discovered they needed to leave each morning by 4:00 a.m. to avoid heavy traffic as they crossed the city to their worksite. They worked for 9 days, laying block and cementing the walls until they completed all of the walls on the second floor.

Although the school’s students were on summer break, one of the highlights of the trip was getting to visit with the local people, volunteers reported, including the Nairobi teachers and several parents who came to work alongside the group each day.

“Local [residents] were very friendly and helpful. They weren’t there to just watch us work,” Kast said. “They were very interested in making their school a better place, and they were also very interested in getting to know us. They loved to talk and tell us about their families. Some took us to their homes nearby to show us where they lived. Many of the houses there had under 200 square feet of living space.”

Ryan Brown, a Campion Adventist Academy student on the trip, said he felt good about the work they did because it would help so many students.

“The most meaningful part of the trip was seeing how other people lived,” he said. “It made me appreciate my life in America and realize how lucky we are.”

In addition to the construction work, a doctor and two dentists in the group offered free medical and dental care to the people in the neighborhood of the school. These clinics were a large draw for the local people and allowed the group to have greater interactions with people from the community.

Residents of the Campion community in Colorado gave donations that Kast collected before leaving on the trip.

“HMS [Richards Adventist School] donated the entire grade-school Bible curriculum that they were replacing, and the [Nairobi] school was very happy to receive the textbooks. The students have to buy their own textbooks, so they often will share due to lack of money,” Kast commented. “We also took several suitcases of donated clothing with us. They were placed in one of the classrooms to be given to the people of the community as they need it.”

“I believe the best part of these trips is meeting the people,” Kast said. “The relationships we made with our new friends are genuine. When we leave, there are always tears shed as we leave our new friends. When we visit other countries and cultures, it helps us put a face on what we see only in magazines and on TV.”

It is something that broadened the students’ horizons, Kast said.

“Often, we have preconceived ideas of what a place will be like or what people believe and do. It is when we can say we have friends that are Kenyan that we can truly say we understand a little about them and their way of life. It also removes much of the fear we may have of an area due to our lack of knowledge.”

The group stayed in guest rooms on the campus of the East Kenya Union Conference, which also includes a church and medical clinic. While volunteer work took up the majority of the students’ time in Nairobi, the group also attended Saturday (Sabbath) worship services at the local church, ate at a restaurant, and had the opportunity to feed giraffes at a wildlife park.

When the work was completed, most of the group visited Maasai Mara National Reserve in southwestern Kenya. The Maasai nomadic people also reside in that area, and the Campion students got to see a Maasai village. While many Maasai have settled into permanent villages, some still roam the vast Serengeti plain, following the wildlife.

“Visiting the Maasai village was as much a hit as seeing the animals,” Kast said. “Hopefully, we all represented our God and our home country well.”

The original version of this commentary was posted by OUTLOOK.