The Jews of Adventism 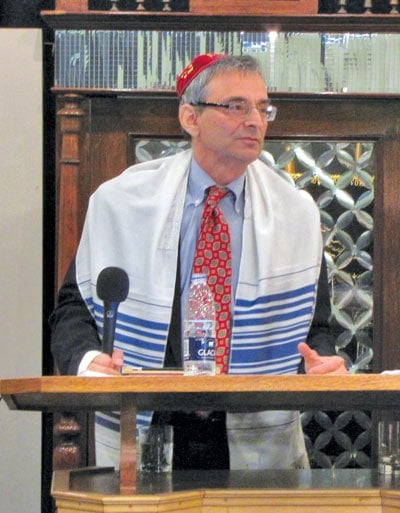 Every Sabbath a growing number of Seventh-day Adventist congregations are taking on a distinctive appearance: men wearing skullcaps and prayer shawls, alongside women, recite prayers in the Hebrew language of their forebears. In many places the Torah, a parchment scroll of the first five books of the Bible—authored by Moses—is read from theplatform. A Jewish flavor permeates the proceedings, even the potluck suppers.

From the bustling metropolis of Buenos Aires, Argentina, to the American Jewish neighborhoodsof Los Angeles, Miami, and New York City, to Israel’s teeming streets and beyond—Seventh-day Adventists are reaching and receiving Jewish believers in both Jesus and the three angels’ messages. Richard Elofer, a longtime worker in thefield of Jewish Adventist outreach who heads thechurch’s World Jewish Adventist Friendship Center, based in France, estimates there are between 4,000 and 5,000 Jewish Adventists active in the church today.

That may not seem like many, but it’s far more than have ever been recorded before, Elofer said. Thedifference, which he has seen during 23 years ofworking to reach Jews, is a ministry approach that understands the Jewish mind-set and adapts theAdventist message to be understood by those who may be unfamiliar with any Christian beliefs.

“The change I have seen is tremendous,” Elofer toldAdventist World. “In the 1990s we had no Jewish Adventist congregations in the world; today we have about 40 of them, 25 just in the United States. Eachof these congregations is doing a great job of witnessing to Jews that Jesus is the Messiah. Before starting this contextualized ministry, Jews were coming to the church, but they did not stay; after three to five years they left the church. Today our ministry is so great that Jews have found their place in the church and stay and remain Adventist.”

In Florida, Jeff Zaremsky, a Jewish Seventh-day Adventist pastor, focuses on reaching out to Jewish people in a manner they easily understand. He also works with the church’s North American Division to spearhead Jewish evangelism efforts, which will in 2013 include Shalom Adventure, a Web site introducing people to the common beliefs between Jewish and Adventist faiths.

“We have unique literature,” Zaremsky told attendees at the 2012 Adventist-laymen’s Services and Industries (ASI) convention. “We have congregations that look like Jewish temples [synagogues], and the services that are conducted in a way that is very Jewish-friendly.”

He added, “The Jewish culture is still so much different, especially when we get into religious circles. The terminology is different, and so much about it is different it’s like a totally different foreign language.”

There’s ample reason for this: After 2,000 years of what many Jews call the Common Era, i.e., thetime after Jesus’ life and ministry (often referred to as the Christian Era in Christian circles), manyJews have become wary of, indifferent to, or even hostile to the gospel message. It’s not difficult to understand why: centuries of anti-Semitism, which culminated in the Shoah, or “catastrophe,”the Nazi-led Holocaust that killed more than 6 million Jewish men, women, and children, have hardened many hearts. To many Jews, especially those of an observant bent, the name “Christian” is a label of hatred against their people.

Because of anti-Semitism and persecution, many Jewish communities have become somewhat insular and protective: doing business with Christians is fine, but don’t venture into religious matters. Even more, many Jews firmly believe that if one is born a Jew, one should remain one all their life, and die as a member of the Jewish faith.

The post-Holocaust bursts of ecumenism and understanding between Jewish and Christian leaders have done a lot to lessen that tension, however. At the same time, the existential pressuresof modern life have led many Jewish people into spiritual searching: many avowedly “secular” Jewsare open to spiritual concepts and discussions, and thus are potentially open to the Adventist message. Elofer’s life is an illustration of this: an Orthodox Jewish boy from Morocco, he was a teenager living in France when he met an Adventist family, who befriended him. They shared their mutual belief in the Sabbath and eating food the Bible permitted, and read Bible passages that Elofer imagined had to be different from the “Jewish” Bible he’d received when he was confirmed as an adult member of the Jewish faith, a ceremony called bar mitzvah, literally, “son of the commandments.”

Elofer was surprised. “When I got home, I opened my Jewish Bible to check if what [they had] read was the same, and to my surprise it was. Progressively, I accepted [these] teachings and four or five years later agreed to be baptized.”

His conversion changed his life, but not without cost: “For Orthodox Jews to become Christian, it is like dying; that is why my father mourned for me, and I did not see my father for about eight years. Today my parents live in Israel, and my father is still as strong a Jew as he was 30 years ago: he goes to synagogue every day for his prayers. We can speak together, but not about religion,” Elofer said.

Elofer, who has served as president of the Adventist Church in Israel for 15 years, says thesituation there is far different from earlier years: “After about 100 years of presence in Palestine/Israel we had only 50 members. Today there are more than 1,000 members, shared in 25 congregations, and the majority of our members are Israelis.”

Many of those members turned out in Jerusalem on Sabbath, June 16, 2012, to hear from Ted N. C. Wilson, president of the General Conference of Seventh-day Adventists.

The Sabbath morning worship followed the patternof many Adventist services around the world, withthe added flavor of songs in Hebrew and announcements and preaching translated into Russian, a language spoken by many in thecongregation. Both Wilson and Julio Mendez, secretary-treasurer of the Israel Field, relied on Oleg Elkine to render their English into Russian, although Wilson, who spent two years as president of theEuro-Asia Division, offered more than a few sentences in Russian as well.

In his message, Wilson commented on what happened there some 2,000 years ago, and its relevance for today. “In this very special place in the world, Jesus told Nicodemus that unless one is born again, one cannot see the kingdom of God,” he explained. “This is what we need, and what every person in Israel needs.”

In the United States, Jewish Adventist congregations can be found in many places, which is not surprising given the American Jewish population of nearly 6 million people. Jeff Zaremsky said his Florida congregations are small but growing, because of the effort to put a Jewish accent onthe Adventist message. “I believe this has been the most effective way of sharing God’s love withthe Jewish people,” he said in an interview.

“We’ve seen Jewish people actually attending and for the long term, growing in their spiritual walk, staying with it. Some are accepting Messiah for the first time, and some are becoming members,” he added.

Argentina’s Jewish Adventist community is one of the most advanced, in many respects. Thecongregation has cordial relationships with many Jewish community leaders, and has produced its own Jewish Adventist prayer book and order of worship that mirrors the traditional Jewish liturgy. The idea, again, is to make the Adventist faith comfortable for those whose tradition includes little or no exposure to Christian beliefs.

“Over 10 years traditional Jews that do not believe in Jesus, atheistic Jews, and Adventist Jewsare part of our community,” said David Barzola, the Jewish Adventist pastor who has led theBuenos Aires congregation for 10 years. “Some people choose to become Adventists, other people have no interest in becoming an Adventist, but many think that to be an Adventist and Jewish is not inconsistent.”

Reaching out to Argentina’s Jewish community is also essential, he said. “Our community seeks good relations with the Jewish communities of Argentina. We do not want to be separate, we want to build bridges. Therefore, [Jewish] community authorities, rabbis, and Adventist authorities visit us and participate in our activities.”

What of the future? Continued outreach is assured, especially to the 1.6 million Jews in and around New York City, where the General Conference is spearheading a major evangelistic effort in 2013. Zaremsky told the ASI audience he will participate there in Jewish outreach in establishing health centers and other efforts.