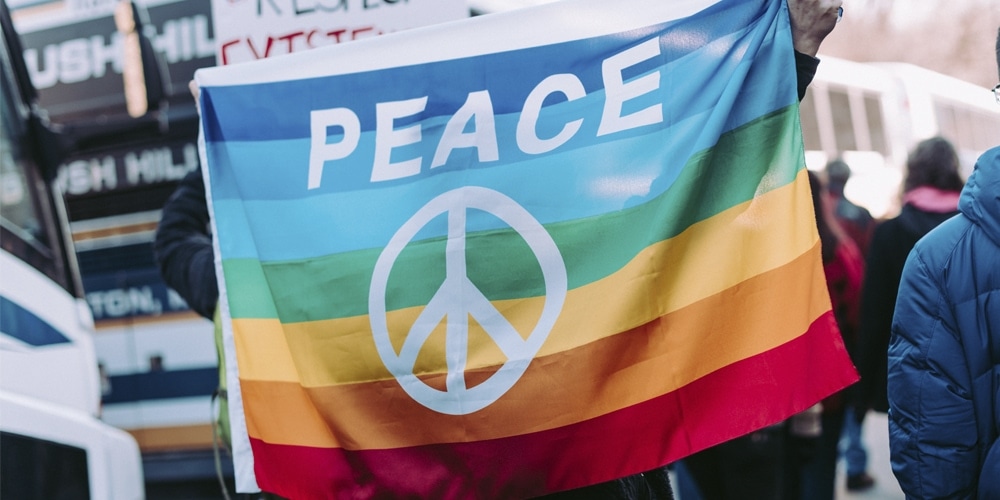 BY BERT B. BEACH

Peace is one of the great political and ethical issues of our day. It is unfortunately both complicated and convoluted.

There are, of course, various definitions of peace. A narrow definition is “the absence of military action.” A more satisfying definition of peace includes political stability, international cooperation, national security, and personal well-being.

In the Old Testament we find a beautiful, rather bucolic, vision of peace: absence of fear, sitting under your own vine or fig tree, swords and weapons beaten into plowshares—in other words, disarmament (Micah 4:3, 4).

The arms race, with more and more nations wishing to become nuclear powers, is one of the most obvious obscenities of our day with its colossal waste of human resources. Things are made even worse by the situation that developed after World War II as it morphed into the “war on terrorism.” Human beings now have the means of humanity’s own destruction. Civilians are no longer just incidentally harmed; they are often now the target.

What must be the Christian position? I will not go into the “just war” theory, which is called into question by the demonically dangerous nuclear, chemical, and biological warfare. Nor will I here deal with the issue of pacifism.

We must begin with the “parenthood” of God. If God is Creator, then we are all brothers and sisters, and killing, fratricide. Since human beings are created in the image of God, every person is of invaluable worth and human life is precious.

The Christian Era began 2,000 years ago when the Savior was born and the announcement to all people was the good news of “peace to those on whom his favor rests” (Luke 2:14).1 Indeed, Jesus Christ is called the “Prince of Peace” (Isa. 9:6), and He said, “Peace I leave with you; my peace I give you” (John 14:27). This reconciliation with God gives us, as a result, “the peace of God, which transcends all understanding” (Phil. 4:7). Of course, we are talking here of personal spiritual peace, not political peace in society. But the former is the necessary foundation stone for lasting peace in society.

We Christians believe that war and strife are the result of sin, alienation from God. It is the purpose of Satan, in the words of Ellen White, to “incite the nations to war against one another.”2 The biblical injunction to every Christian is to live peaceably with all people, as far as possible (Rom. 12:18).

Unfortunately, we have to admit that the Christian record in the matter of war and peace is rather dismal. So-called Christians, including high church officials, have throughout history been involved in military crusades, religious wars, persecution, anti-Semitism, religious and ethnic cleansing, and support of oppressive regimes. They did not, of course, represent authentic Christianity.

We need to remember Jesus’ famous saying: “Blessed are the peacemakers, for they will be called children of God” (Matt. 5:9). How can Christians work for peace?

According to Paul, the ingredient of peace is “righteousness”: being in a right relationship with God and doing the right thing. Paul urges us to “make every effort to do what leads to peace” (Rom. 14:17, 19). We must help develop a culture of peace, tolerance, and understanding. This means not teaching hate, not setting up enemies, not arousing fear and suspicion. The prophet Micah looked forward to the day when people would not take up weapons against each other, “nor will they train for war anymore” (Micah 4:3). Both war and peace are taught and learned.

We Christians must try to help create atmospheres of cooperation and unity. Christians must never act like human ostriches, with their heads buried in the sands of isolation and indifference. We must encourage exchanges between different cultures and ideological systems. We must work for increased understanding between men and women of all races, religions, and political persuasions. We must provide religious liberty, including the right to follow conscience, keep one’s religion, or change one’s religion when conscience asks for that choice to be made. We must stand for equality and nondiscrimination and respect the equivalent rights of others. All these issues can complicate the peace process.

War has become much more impersonal and mechanical, with enemies killing each other from great distances. In this situation there is the danger that personal moral responsibility will fly away with long-range missiles. Christianity has a role to play: emphasize the personal responsibility of each person created in the image of God to work for peace.

The greatest contribution of Christianity comes from both the theology of creation (we have one Creator, and we are all brothers and sisters) and the love ethic from the mount overlooking the Sea of Galilee. Jesus said, “You have heard that it was said, ‘Love your neighbor and hate your enemy.’” This, it seems, is the viewpoint of many religious people. But Jesus then makes a truly revolutionary statement: “ ‘But I tell you, love your enemies and pray for those who persecute you’ ” (Matt. 5:43, 44).

With one bold sweep Jesus eliminates the basis of war: the concept of the enemy. He is essentially saying: Don’t act as if you had enemies. Hostility is swallowed up in love. Of course, this changed attitude can come only through conversion and transformation of individual human minds and hearts, which will have a ripple effect on society in general.

Christians have their hope of a new and better world of harmony and peace anchored in the second coming of Christ. But this hope concerns not only the future. This living hope must translate itself into deep concern for the well-being of every member of the human family. Christian action today for peace and righteousness is a harbinger of the coming eternal kingdom of peace.

In the meantime, we must be peacemakers and work for worldwide justice and peace.

Bert B. Beach served the church in many capacities in both Europe and the United States. He retired as director for interchurch relations for the General Conference Public Affairs and Religious Liberty Department and president of the International Religious Liberty Association. This article originally appeared in Adventist Review in December 2000.