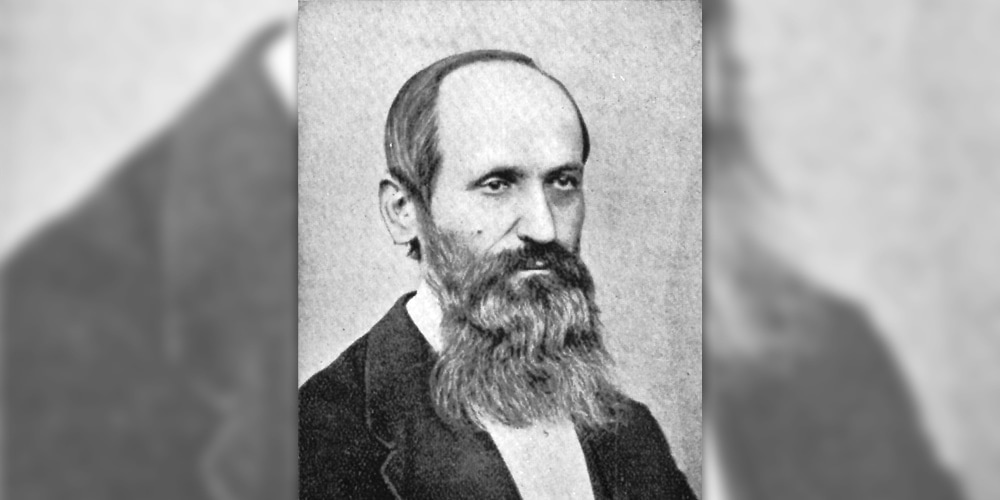 This week we feature Michal Czechowski, the first unofficial Adventist missionary to Europe, in an article that first appeared in the Adventist Review on May 14, 1998. In addition, you will want to click here to watch a video on John Daigneau, whose home is featured in the Historic Adventist Village in Battle Creek, Michigan. John Daigneau was instrumental in connecting the Adventists in Battle Creek, Michigan, with Sabbathkeepers in Switzerland.—Editors

Church leaders in Battle Creek were dumbfounded—and overjoyed. A scant four years after the organization of the Seventh-day Adventist Church in 1863, they held in their hands a letter from Sabbathkeeping Adventists in Tramelan, Switzerland, requesting the services of a minister from America.

How could this have happened? There was no organized work in Europe—no missionaries, no pastors, no literature ministry. But six years before the denomination found the wherewithal to sponsor J. N. Andrews as its first “official” overseas missionary to Europe, God had already planted the truths of Adventism there through the efforts of a Polish-born “unofficial” missionary.1

To Elder M. E. Cornell’s tent meetings in Findlay, Ohio, in 1857, came a tall, dignified man of striking appearance. Thirty-nine-year-old Michael B. Czechowski was a well-educated former monk and Catholic priest who had left his ancestral faith seven years earlier. Czechowski’s investigation of the Bible had begun as a young priest when he determined to believe and preach nothing but truth, a quest that quickly brought him into conflict with Catholic doctrine. Intent on challenging what he had come to believe were the erroneous teachings of his church and to report the decadent morals of the Catholic clergy, he traveled to Rome and sought audience with the pope. When his complaints fell upon deaf ears, he disassociated himself from active ministry and threw himself into revolutionary movements designed to free his homeland. By 1850 he had been released from his priestly vows, and later that year married Marie Delavouet in Brussels.

In 1851 the couple moved to the United States, where Czechowski accepted Baptist teachings. Through Cornell’s ministry in Findlay, however, Czechowski embraced the Bible Sabbath and the messages of Revelation 14 and was baptized as a Seventh-day Adventist. Shortly thereafter he traveled to Battle Creek and met with church leaders. His evident talent and determination soon brought him his first ministerial assignments.

After several years of successful labor among the French Canadians in upstate New York and Vermont, Czechowski and his family moved to New York City to labor among the swelling population of European immigrants. Writing of his work there, he noted: “I have had the privilege of preaching the gospel of the kingdom to the highest Italian dignitaries in this vicinity, who have listened to me with much interest and encouraged me to go to Italy. Still, I feel there is a great responsibility resting upon me in regard to my dear unfortunate Polish nation, and I must do all in my power to enlighten them in regard to Scripture truth; and also other European nations to whom I could have access. It is my purpose to establish myself in the valley of Lucerne near Turin, among the French Waldenses.”2

Czechowski’s enthusiasm to take the truth he had embraced to his home continent brought criticism from fellow Adventists. Although James and Ellen White expressed their confidence in him and gave him the sizable sum of $100 for his intended mission, few others followed their lead. Disappointed in his church, yet determined to carry forward the mission he believed God had given him, he turned to friends in the Advent Christian Church, who promised token support. Accompanied by his family and Annie Butler (sister of future General Conference president G. I. Butler) as his secretary, Czechowski sailed for Europe in May 1864.

Almost immediately upon arriving at Torre Pellice in the Waldensian valley of Piedmont (northern Italy), Czechowski rented a hall for evangelistic purposes and, with undaunted zeal, devoted himself to proclaiming the third angel’s message. His efforts there illustrate the daring that marked his career as an Adventist pastor and evangelist: he came to a city where he knew neither people nor language and yet announced and conducted public meetings.

Czechowski’s charismatic personality brought him both translators and numerous invitations to address large Waldensian congregations. Success attended his efforts, and he established his first Sabbathkeeping company in Torre Pellice.

The tireless evangelist soon extended his outreach to other cities—Turin, Milan, Bergamo, Venice, and Bresscia, winning converts in each place despite mockery and much persecution from the local clergy. His converts included Catherine Revel and Jean Geymet, the first baptized Seventh-day Adventists in Europe.

Civil war in Italy prompted Czechowski’s decision to transfer his labors to Switzerland. A party consisting of his immediate family—his brother, Annie Butler, and Jean Geymet—left Torre Pellice in September 1865, traveling to Mont Cenis in the Italian Alps by rail coach. Their lack of funds forced them to complete their journey over the Alps on foot. With five children ranging in age from 13 years to 6 months and heavy luggage for 10 people, this was no small undertaking. After several exhausting days, they arrived in Yverdon, where a kindly farmer offered them food and a bed in his barn. A few more miles of exhausting foot travel brought them to Grandson in Switzerland. Scarcely allowing time to get settled, Czechowski again plunged into public evangelism. Despite intense opposition, he soon baptized three converts in Lake Neuchâtel.

Czechowski’s next four years of labor in Switzerland produced numerous Sabbathkeeping companies, the largest of which was at Tramelan. Here he had the joy of seeing many young married men accept the Adventist message, seven of whom he ordained to the evangelistic ministry.

Owing to the fact that he had been financially supported by individual First-day Adventists (though not by their denomination), Czechowski didn’t inform his converts of the existence of the Seventh-day Adventist Church or its Battle Creek headquarters. Quite by accident, Albert Vuilleumier, Tramelan church leader, found a copy of The Advent Review and Sabbath Herald in Czechowski’s room and immediately addressed a letter of inquiry to Battle Creek. Church leaders were amazed and thrilled to learn of Sabbathkeepers in Switzerland.

Always looking for new ways to spread the Adventist faith, Czechowski soon sent men with literature and books to do “colporteuring” (house-to-house ministry), thereby commissioning the first Seventh-day Adventist literature evangelists. His workers fanned out through the Central European countries and even entered Scandinavia.

A series of staggering setbacks reminiscent of the first chapter of Job soon befell Czechowski. Unlike the ancient man of God, however, the missionary didn’t respond with deep trust and patience.

In March 1867 the house he rented in Saint-Blaise burned to the ground, destroying nearly all his possessions. He then had a large house built to serve as his home, chapel, and printing office, but the venture, mortgaged to the hilt, proved far beyond his financial capability. The Advent Mission Board in America had cut off all support, and when he could not redeem the notes payable on December 31, his empire simply collapsed.

Frustrated and discouraged, Czechowski foolishly abandoned both his converts in Switzerland and his family, leaving both groups to fend for themselves. Hoping to recoup and start ove
r again, he traveled through Hungary to Pitesti, Romania.

Penniless and unemployed in a foreign country, Czechowski knelt to pray. The impression grew on him that he ought to stroll about town, which he did, stopping occasionally to look into the shop windows. At a select shop displaying expensive silks, embroidery, and velvet, he was soon in conversation with a pleasant young shopkeeper who spoke faultless French.

Soon the discussion turned to religion. The shopkeeper explained how his pious Orthodox father had made a wearisome pilgrimage to Mount Athos in Greece. Sensing an opening, Czechowski asked, “Do you consider it possible to obtain salvation this way?”

“But how is it possible any other way?” the young man queried. His visitor carefully explained how salvation is attained through faith alone. Then he recounted the painful events in his life that had brought him to Pitesti.

“Come home with me,” Toma Aslan invited. “You may stay with us, and we will turn our large living room into a lecture hall where you can present the Bible truths you’ve been telling me about. You will speak in French, and I’ll translate into Romanian.”

He again had a place to minister and appreciative listeners. In the following months, as Czechowski preached and taught, the entire Aslan family and their in-laws were baptized, resulting in a strong Adventist congregation in Pitesti.

Czechowski’s last few years are shrouded in mystery: only isolated references to him, most of them negative, appear in correspondence from the Tramelan believers. One letter to General Conference president J. N. Andrews was also written in 1873. He died in Vienna, Austria, in February 1876, only 300 miles from the place of his birth, closing one of the most remarkable life circles in the history of early Seventh-day Adventism. Michael Czechowski’s story illustrates that God must always use flawed human beings to accomplish even His grandest designs. The very qualities that caused his rupture with his Swiss converts were nonetheless used by God to take the message to still more regions.

Ten years before the Seventh-day Adventist Church rallied itself to send J. N. Andrews to Switzerland, this singular missionary was already sowing the truths of Adventism across Italy and Central Europe, an effort that Andrews and others later gratefully acknowledged.

Czechowski’s diligent efforts in Torre Pellice led young Catherine Revel to become the first Seventh-day Adventist in Europe, and in turn, her faithful witness led to a large Adventist church. Catherine’s grandson Alfred Vaucher went on to teach Bible at Seminaire Adventiste in Collongessous- Salève, France. From Torre Pellice also came Jean Geymet, Czechowski’s coworker and an Adventist pastor. From his labors in Switzerland came the Vuilleumier family, among whom were Albert, an evangelist and elder of the Tramelan church, and Ademar, early leader in the church’s publishing work. Jean Vuilleumier, son of Albert, gave 50 years of service to the church. From Tramelan also came James Erzberger, leader of Adventist work in Germany; the Roth family, with 12 children, most of whom became church workers; and S. D. Harnhardt and his son Jean-David, both ordained evangelists.

With his deep experience in European culture and sensitivity to Roman Catholicism, Czechowski accomplished what no American-born missionary could have done in planting Adventism on the continent. His eventual successor in Switzerland wrote of Czechowski in 1869, “We regard the circumstances of this case [Czechowski’s independent mission] a wonderful call to us from the providence of God to send the present truth to Europe. We cannot refrain from acknowledging our backwardness in this work. But it is in our power to redeem the past, by discharging our duty for time to come.”3

It is yet another testimony to the goodness of God that He could use the failings of unimaginative church leaders and an admittedly flawed messenger to plant His truth in the middle of Europe. From that less-than-perfect beginning, and through the efforts of one very determined man, His Spirit has raised up “a great multitude that no one could count, from every nation, from all tribes and peoples and languages” (Rev. 7:9, NRSV), who will one day rejoice in the presence of the Lamb.

Adriel Chilson was a retired pastor living in College Place, Washington, when this article was written. He passed to his rest in 2005.

4 Bible texts credited to NRSV are from the New Revised Standard Version of the Bible, copyright ã 1989 by the Division of Christian Education of the National Council of the Churches of Christ in the U.S.A. Used by permission.