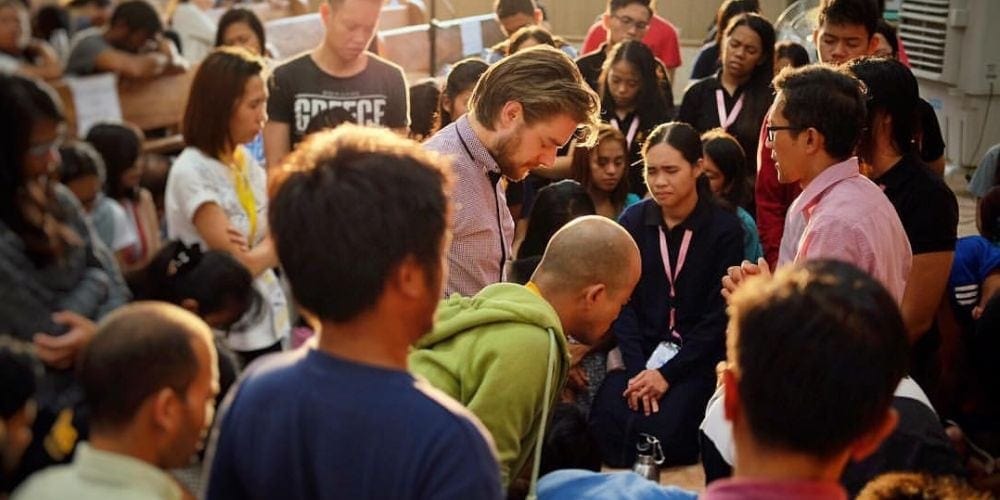 Author’s note: There’s been a lot of talk in the Seventh-day Adventist Church lately about Total Member Involvement. It sounds exciting. But what does this mean for hundreds of thousands of young adults caught between the gap of Pathfinder’s activities and deciding their future careers? How can we inspire them too, to really make Christ first and get involved in sharing the gospel? Well, I believe I have discovered an answer to these questions: not in a church committee meeting, or on a ministry’s strategic planning board, but on my knees with a group of seeking young people in the Philippines. And the answers I discovered are not only for our youth, but also for you and for me.

As our over-stuffed jeep loaded with many people and far too much luggage approached its final destination, my heart soared with eager expectation.

“Would the Philippines Youth for Christ conference really be all that I’d heard it to be?” I wondered.

As we arrived, an impressive banner stretched high above the gate of the Seventh-day Adventist 1,000 Missionary Movement Campus in Silang, Cavite, Philippines. It read simply, “Jesus is coming soon.” Smiling faces and warm welcomes greeted us as the gate was opened and we drove through.

An hour later, as I joined the first prayer session, I knew that there was indeed something special about this conference. I couldn’t quite put my finger on it. Usually it takes a bit of time for things to build, for the Holy Spirit to really be felt. But not so at this event. Earnest fervency characterized those very first prayers as hearts were humbled before God’s throne in eager expectation for what He was about to do.

Later that night, during the opening evening message, I learned the clue to the overwhelming power of the Holy Spirit that I had felt from the moment we drove on the campus. The conference had literally been bathed in prayer for months in advance. The conference’s leadership, comprised of energetic youth as well as dedicated pastors, had actually hosted a “100 Days of Prayer”emphasis leading up to the event.

As one of the presenters, and having just traveled from the other side of the world, I would have had a good excuse to sleep through the prayer service that started at 5 a.m. the next morning. But I was determined not to miss any blessings, especially because I had heard amazing testimonies from attendees of previous annual Philippines Youth for Christ conferences.

So a few minutes before 5 a.m. the next morning, I made my way to the church auditorium to pray. I was not alone. Nearly 400 young people also came — not looking sleepy like me but with radiant faces and expectant joy.

I listened quietly with eyes closed as young people began pouring out their hearts to God in thanksgiving and praise, humbling their hearts with repentance for their Laodicean spirit, and then boldly claiming the promises of God’s Word. As they sang songs of worship between the prayers, it seemed that I could almost hear the heavenly angels singing with us. It was a taste of heaven that I wished would never end.

But we did more than pray. Over the next few days, the nearly 700 young people in attendance eagerly pored over the Scriptures, copying down passage after passage that the presenters shared. The enthusiastic interest of the young people amazed me. The shared messages were not light and entertaining but deep and convicting. Yet those in attendance seemed continually hungry for more.

On outreach day, bus after bus was filled as the attendees went out to share Jesus on the streets. That night, many testimonies of praise were on their lips as they shared the amazing things God had done.

I will never forget petite, soft-spoken Arieona, who flew from Malaysia to attend the conference. Although small in size, she had a huge fire in her eyes as she told me how God was increasing her passion for service and giving her large dreams for future ministry.

“Before the conference I was ashamed to share my faith even with my own housemates,” she confided. “But after attending last year’s event, I have learned to be bold in my witnessing. I don’t want to waste my life and youth any more on superficial things.”

Arieona, already active in youth ministry, is now praying and working to bring a similar conference experience to Malaysia.

A young woman named Kym shared that she had failed her bar exam to become a lawyer shortly before the conference. She signed up to attend at the last minute, hoping for answers. After the conference ended, she wrote to me that she had come from a “great disappointment to a divine appointment.”

“My career in law seems to be on hold, but that’s OK,” she said. “I will continue with my lifework, to share the everlasting gospel. I now recognize that this is the most important thing!”

A young man named Randy told me that he had engaged in a homosexual lifestyle for more than seven years. He received test results during the conference that showed he was HIV-negative even though he had been exposed to the virus.

With tears in his eyes, he made reconciliation with estranged family members and determined to set things straight in his life during the conference. Now he along with new friends are determined to start a ministry to help other Filipinos struggling with homosexuality.

“The conference is not my savior,” Randy said by e-mail a few days ago. “However it pointed me to my Savior and has been a powerful instrument that was sent by God to refine me, show me my need, and save me from my darkest hour. My life will be forever changed.”

The conference highlight for another attendee, Jae, occurred when she met the same tricycle taxi driver with whom she had prayed at last year’s conference during its outreach day. The man’s wife had been sick, and Jae had offered to pray for her after giving the husband some religious literature.

While Jae did not remember the man initially, he recognized her immediately when they met on the street during this recent conference. He joyfully thanked her for her prayers.

Jae cried as she shared the story later.

“I just thank God that He can use me,” she said.

I have to admit that I did a lot of deep thinking during the conference. There were no sports activities, flashing light shows, colorful dramas, junk food or late-night parties. The program only featured the simple truths of the Bible, earnest prayer, and encouragement to seek after God with humility of heart.

Many people made great sacrifices just to attend. One group collected bottles and plastic to sell to raise enough to pay their travel expenses on the cheapest transportation to the conference. They then came by faith, not knowing if they would get a place to sleep or any food to eat. Other young people could barely afford the basic registration fee and showed up with tents and meager food supplies, willing to rough it in order to attend. Many participants shared that God had provided the funds and means to come.

“Why would hundreds of young people sacrifice so much to attend?” I wondered.

Then I remembered that no activity can feed the soul or change a life like this, for as the Bible tells us, “And ye shall know the truth, and the truth shall make you free” (John 8:32). And once you’re free, you want to tell the world — you want to witness for the One who has set you free!

As I left campus at 4 a.m. on Sunday to return to the United States, I witnessed the intense joy of Fesanmie, who along with hundreds of others was participating in the capstone of the conference, an all-night prayer service. She said the prayer service had changed her life.

“During the conference I sensed the Holy Spirit working on young people’s hearts as I have never seen before,” she wrote me later. “It felt like Sabbath every day, and it was amazing. I have been waiting so long to experience this kind of revival among my fellow young people. Now I’m excited to be a part of the great work to spread the gospel. Now I’m excited to start a ministry and be active in witnessing for Christ. I believe that even now God is already beginning to pour out the latter rain in our midst.”

Adventist Church cofounder Ellen G. White wrote in Adventist Home: “In the closing scenes of this earth’s history many of these children and youth will astonish people by their witness to the truth, which will be borne in simplicity, yet with spirit and power. They have been taught the fear of the Lord, and their hearts have been softened by a careful and prayerful study of the Bible. In the near future many children will be endued with the Spirit of God and will do a work in proclaiming the truth to the world that at that time cannot well be done by the older members of the church” (p. 489).

I believe I met many of these children and youth at the Philippines Youth for Christ conference.

Not only will we have Total Member Involvement in the Seventh-day Adventist Church, but we will also have Total Youth Involvement. What I witnessed in the Philippines does not have to stay in the Philippines. I believe it can happen anywhere where there is a true humbling of heart and an earnest hunger for a deeper walk with Christ. In The Desire of Ages, Ellen White wrote, “From the soul that feels his need, nothing is withheld. He has unrestricted access to Him in whom all fullness dwells” (p. 300).

Do we truly feel our need? Are we willing to truly humble our hearts and be emptied of self so that He can fill us?

My prayer is that what I witnessed in the Philippines will soon be happening in every corner of our globe so that the work can be finished and we can all go home.

Even so, come Lord Jesus!

Melody Mason is coordinator of the General Conference’s United in Prayer initiative and author of the best-selling book, Daring to Ask for More: Divine Keys for Answered Prayer, published by Pacific Press in 2014.

By Ted N.C. Wilson, president of the General Conference of Seventh-day Adventists