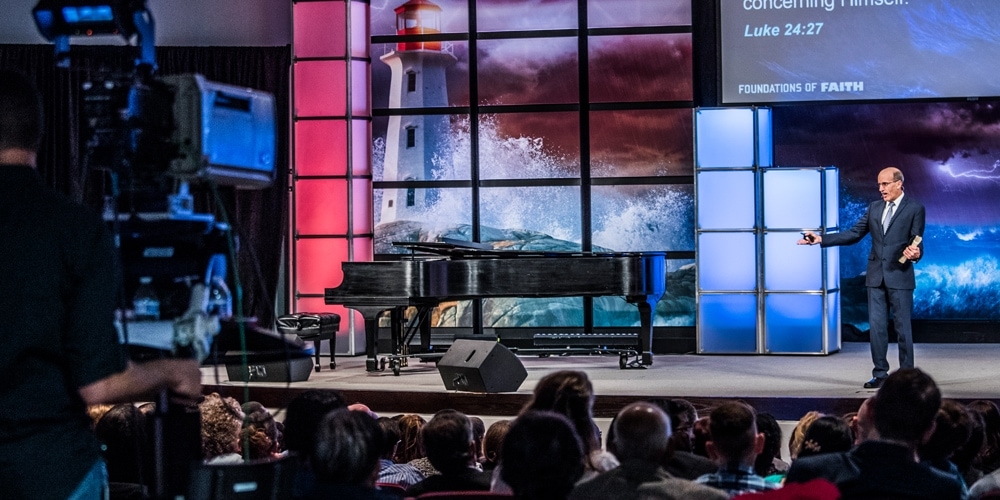 “I’ve never heard anything like this before!” That’s what one attendee said while attending a nine-part Foundations of Faith series, held in November 2017 by the Amazing Facts ministry at the world headquarters of the Seventh-day Adventist Church in Silver Spring, Maryland, United States. He had been watching the Amazing Facts television programs for years, so when he discovered Doug Batchelor, Amazing Facts speaker and director, would be conducting the Bible series near where he lived, decided to attend in person.

Besides those viewing on Hope Channel, 3ABN, and AFTV, about 500 guests attended the live event each weeknight, with a full house of 800 on the weekends. People also traveled from various parts of the country—from Rhode Island and as far away as Louisiana and Texas—to experience the revival series in Silver Spring. Some booked hotels and spent the entire week to hear all the presentations, including a young adult group from New Jersey. In addition, many more joined the event online. Including YouTube, Facebook, and the official host site, videos views reached nearly a million. Moreover, over a hundred local host sites registered for the event around the world.

For Foundations of Faith,Batchelor focused on, what he calls, the “Ten Super-Sermons” of the three angels’ messages of Revelation 14. Each of the ten subjects begin with the letter “s,” and are doctrines arguably neglected or misunderstood by most Christians—Scripture, sin, salvation, Satan, Sabbath, state of the dead, sanctuary, Spirit of Prophecy, strength (health message), and the Second Coming. “I believe true revival will always come in connection with the proclamation of the Word and prayer, and that these distinctive doctrines of our church can genuinely lead to true heart transformation,” says Batchelor.

Local guests were given a free copy of the Foundations of Faith Bible lessons and The Afterlife Mystery sharing magazine. A complimentary children’s program was provided by staff of the world Church headquarters, where forty children learned about building on the solid Rock of the Bible, Jesus Christ. After the one-hour presentations, local guests and those watching on Facebook were invited to submit Bible questions for a thirty-minute question-and-answer time with Batchelor.

Foundations of Faith aimed to reaffirm foundational truths of the Bible, and for dozens of local guests, much of what they heard was new. One man attending with his wife became convicted regarding biblical insights on the Sabbath and is now determined to begin keeping the seventh-day Sabbath. Another guest personally thanked Batchelor for the series, and as they spoke, a woman standing in line behind the man asked him where he lived. It turned out that they are from the same town and the woman personally invited him to church, an invitation he accepted.

Many others have expressed appreciation for the timely series, which coincided with the 500th anniversary of the start of the Protestant Reformation—when Martin Luther nailed The 95 Theses to a church door in Germany. Foundations of Faith was created to be a “stirring, convicting call for Christians of all backgrounds to return to the Bible and reaffirm scriptural teachings so vital in these last days,” according to Amazing Facts.

Because the programs were recorded, Amazing Facts expects the presentations and their corresponding lesson materials to inspire revival for years to come.