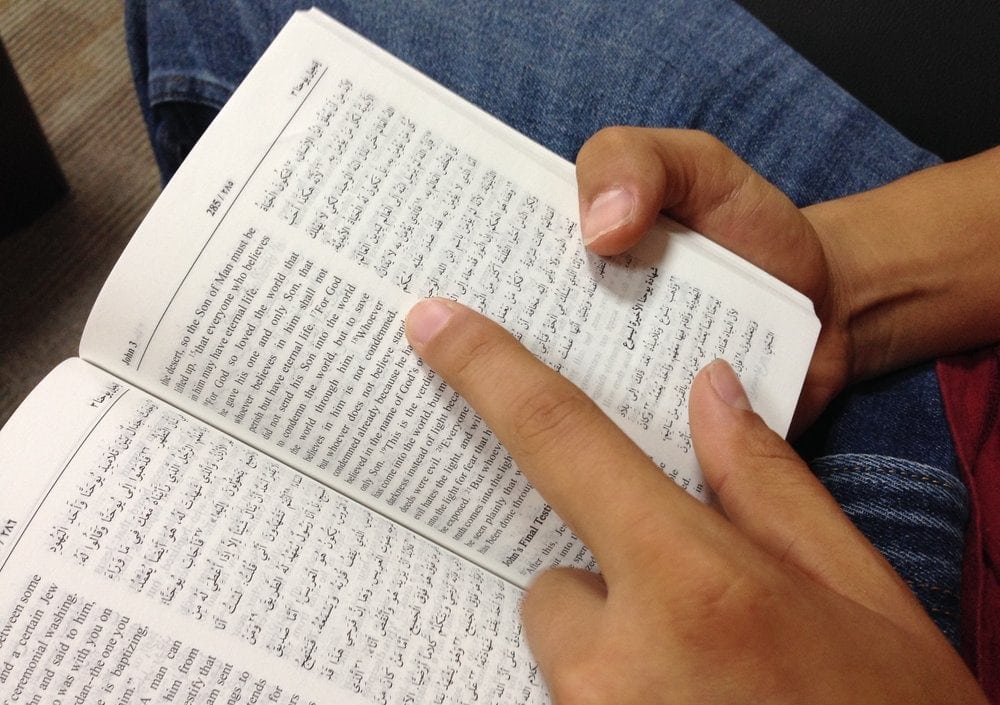 Large tears welled up in Juanita’s eyes. She drew her young daughter close in her arms. But her voice remained resolute as she spoke about the possibility that she might die for her faith in the Middle East.

“When you are sure of the call of God and the call of the church, it is easier to go to dangerous places because you know that God will be with you,” Juanita said. “He will help us.”

He said he had been thinking about Arabs who made international headlines giving their lives for a cause they believed in, no matter how wrong the cause might be.

“Why can’t we believe in our cause and be willing to give our lives, too?” he said. “This is the true cause. It is the cause of Jesus.”

Carlos, Juanita, and their daughter are among
17 Seventh-day Adventist families who arrived in the Middle East from South America a year ago this month. The highly trained professionals gave up comfortable jobs in their home countries to spend the next five years working in one of the most difficult parts of the world to share the gospel.

The past year has been filled with Arabic lessons, intensive planning, and complicated paperwork as the couples inch closer to securing jobs in restricted-access countries. Their goal is to serve as tentmakers: front-line, self-supporting Adventists who share their faith in the workplace.

Juanita and Carlos joined another young married couple, Pedro and Libna, for a candid interview about their efforts. The
Adventist Review is not using the couples’ real names nor disclosing their location because of the sensitivity of their work.

A Child Is Called to Serve

Tears formed in Juanita’s eyes when I asked how she had weighed the risks as a mother. Before leaving South America, she said, she and Carlos signed a document granting custody of their daughter to her maternal grandparents in the event something happened to them.

Juanita said she had no doubt that God had called not just her and Carlos but also their daughter to serve in the Middle East.

“God has called us as a team, the three of us,” she said, holding her cooing daughter on her lap.

She said she had worried for the girl before they arrived but had kept her thoughts to herself.

“I know that God can use her just like He can protect her and be with her,” she said. “The call is for her as well, even though she doesn’t know it.”

The girl has already helped her parents make inroads in a culture where it’s difficult for foreigners to make friends with Arabs. Not only are men and women strictly segregated, but Arabs and foreigners often live in their own worlds as well.

The other day, Carlos was playing with his daughter at an outdoor playground when her antics caught the attention of an Arab father who had a child of the same age. The two men started conversing and ended up exchanging phone numbers. A short time later, Carlos’ new friend invited him to a one-on-one game of ball.

“My daughter is making a lot of connections,” Carlos said.

Personal relationships are especially important in the Arab world, where literature evangelism, public meetings, and other outreach efforts that are common elsewhere are banned, church leaders said.

‘We Have Had Some Close Calls’

No Adventist believers have been killed for their faith in the Middle East in recent memory, said Homer Trecartin, president of the Adventist Church’s Middle East and North Africa Union.

“We have had some close calls, but I am not aware of any who have died,” he said.

Why Are Adventists Alive?

Homer Trecartin, president of the Middle East and North Africa Union, talks about why he cautions Adventist front-line workers to be careful even though no one has died in recent memory:

I don’t know when the last Adventist died in the Middle East and North African Union because of his or her faith. It has been many, many years. We have had to evacuate some over the past 15 years. We have had some get very sick because of disease or pollution, or have pregnancy complications that endangered the baby and mother.

Organizations that work with the persecuted are always frustrated when they come to see me and find that we have had very little outright persecution. They want to know why. Of course, they need dramatic stories to help generate their income, and we don’t have any. One reason may be that as people who don’t drink alcohol, eat pork, or pray to saints, we are not seen as being as offensive to the majority as are some. But I suspect that one reason is that for years we have been afraid to do much of anything in reaching out to the majority population.

But at the same time, I believe that Satan is not happy when God’s people begin to follow the gospel commission to share the good news with all people. I don’t think the devil is going to sit idly by while Adventists follow Christ’s method and begin to move into cities of millions where there have never been any Adventists and there mingle, meet needs, win confidence, and then little by little start to invite their friends to follow Jesus.

But Trecartin openly tells potential volunteers that they must be willing to die if they accept a call to serve in the Middle East.

“I don’t want people to come and help us for the adventure and thrill,” he said. “I want them to come because they really believe that God has called them and they are willing to go even if it means they never return home.”

Trecartin, who speaks about his work at Adventist campuses around the world, happened to pay a visit to the university where Juanita’s father serves as president after Juanita and her family were already preparing to move to the Middle East. On a Friday night he was moved as he listened to Juanita’s father make a powerful plea for young adults who would be willing to be martyrs.

Tears came to his eyes as he watched the university president making such a call, knowing that his own children had already made such a decision. But he really started to cry when he saw the president’s other daughter stand and walk up on the platform in answer to her father’s call.

“Many people raise their children with a sense of mission,” Trecartin said. “But not many actually call their own children to go as possible martyrs.”

Trecartin personally spoke about the risks of working in the Middle East with the 17 South American families. Pedro said he especially remembers Trecartin telling them, “The best place to be is where God wants you to be.”

“For me, that’s encouraging,” said Pedro, who was eager to move to the Middle East when he and his wife, Libna, received the call.

‘I Was So Scared’

But Libna said she was initially frightened. She worried about the strict limitations placed on women’s attire and their freedom of movement. Her only thought about the people in the Middle East was that they were all terrorists and extremists.

“I was so scared,” she said. “It was very difficult for me.”

She prayed for days but remained scared when she and her husband arrived with the other 16 families in Lebanon for an orientation program last February.

But something has been changing in her heart over the past year, she said.

“God has been putting love in my heart for these people,” she said. “Now I have friends here, and I see them every day in the supermarket with their kids. I realize that they are people just like me, and I’m beginning to love them.”

Love for God and for others is what motivates the front-line workers the most, they said, even as they risk all for the sake of a higher calling.

“Jesus took the risk first. Martyrs have always existed, and we know that that will happen at the end of time,” Carlos said. “If the Lord calls us, He will enable us to face any difficulty.”

“I have been praying about it,” he said as his daughter, now off her mother’s lap, joyfully toddled around the room. “I have told the Lord: ‘Lord, if You think we should give our lives, please prepare us to be faithful to you until the end. We want to follow your call. Give us courage.’

“We know God will give us the strength to face any difficulty,” he said. “If He calls us to make that sacrifice, it would be an honor, of course. We are at peace. If we are within the will of God and serving Him, we are happy.”