When a Rwandan Woman Asked to Go Home With Me 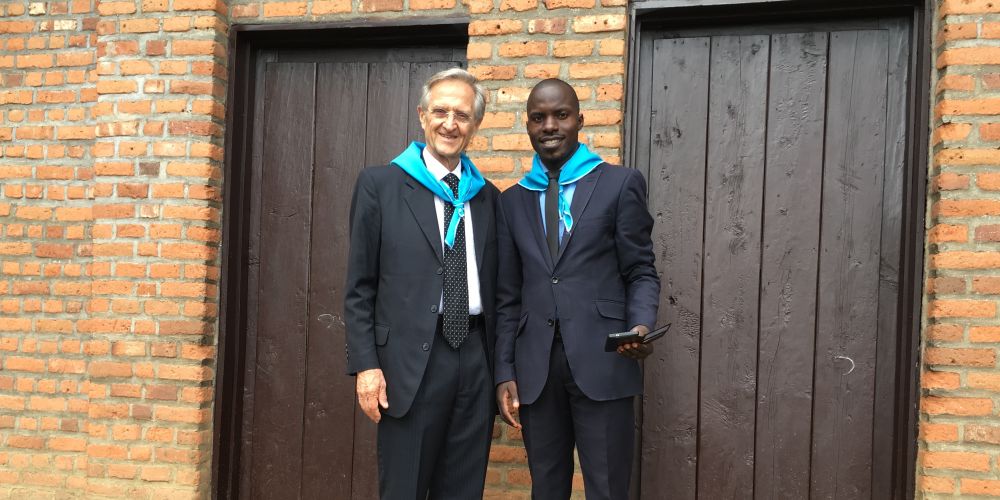 Hurrying down the rocky path toward the Mudende Seventh-day Adventist Church, my interpreter and I called out our usual greetings and invitations to gawking residents to attend ongoing evangelistic meetings.

Many people replied, “See you there!” with bright smiles. Few of them had ever seen a white person up close in this mountainous corner of Rwanda overlooking the border with the Democratic Republic of Congo.

Then a woman surprised us.

After the usual greeting, she burst out, “Take me home with you.”

As I looked into the woman’s face, I saw a sincere mother, perhaps even a grandmother, who had spent years working in the fields to provide the basics for her family.

I wasn’t sure how to respond.

So after additional greetings and reaffirming our invitation to our meetings, my interpreter and I resumed our walk to the church.

My youthful, energetic interpreter, Jean-Baptist Manirakiza and I were conducting a series of 18 meetings under the banner of “Total Member Involvement Rwanda,” a series of evangelistic meetings held at more than 2,200 sites across the country from May 13-28.

My wife, Christine, and her interpreter, Bonaventure Iyamuduhaye, were holding similar meetings at the nearby Shaki Seventh-day Adventist Church, located at the base of Mount Karisimbi, an inactive volcano in the Virunga Mountains. Even though Christine and I spoke a few words of Kinyarwanda, the official language of Rwanda, from a former mission assignment, we both needed assistance to communicate.

The meetings were going well. Hundreds of men, women, and children were learning new truths daily from the Bible and reaffirming the faith that they had already experienced at both churches. They eagerly embraced nightly invitations to stand for Jesus. Their enthusiasm and acceptance was energizing. But I kept thinking about the woman with the unusual request to be taken to my home. She probably didn’t even know that I lived in Miami, Florida; only that I had come from far away.

I asked my interpreter whether the woman was attending the evangelistic meetings and learned that she lived close by and was most likely present.

On the final Sabbath I decided to share the brief conversation during my final sermon, which focused on heaven.

Avoiding specific details to prevent potential embarrassment, I disclosed the spontaneous request from the woman in their community to be taken to my home. The response was an instant roar of excitement and approval, signaling that other people had entertained similar thoughts and would have made the same request given the opportunity.

We agreed that the woman would have been amazed at the new sights and experiences if I had invited her to go to the United States with me. But after a few days or weeks, I said, the woman probably would have said: “Where is my family? Where are my friends? I’m hungry for the familiar produce from my garden.”

The congregation laughed in affirmation.

I suggested that rather than accept a temporary excursion to another country, it would be far better to accept Christ’s invitation to join Him in a heavenly home. This is a place where friends and family will no longer be separated, and we will dine with Jesus under the Tree of Life.

At that point, the congregation was ready to repeat Jesus’ words in John 14:1-3 from memory — and in unison, in tones that resembled a shout: “Let not your heart be troubled; you believe in God, believe also in Me.In My Father’s house are many mansions; if it were not so, I would have told you. I go to prepare a place for you.And if I go and prepare a place for you, I will come again and receive you to Myself; that where I am, there you may be also.”

The wooden rafters of the red-brick church vibrated with conviction from newly baptized and regular members alike.

On that Sabbath, Mudende church pastor Jean Semucyo declared to the congregation, “All the angels of heaven are visiting Rwanda on this special Sabbath.”

The congregation readily agreed with a hearty, “Amen!”

We left the church with a simple prayer to Jesus on our lips: “Take me home with You.”

Pastor Wally and Christine Amundson served as missionaries in the 1980s to Rwanda, Burundi, and the Ivory Coast, where they established the first SAWS (now ADRA) offices on the continent of Africa. They retired from the Inter-American Division earlier this year and represented the division at the evangelistic meetings.