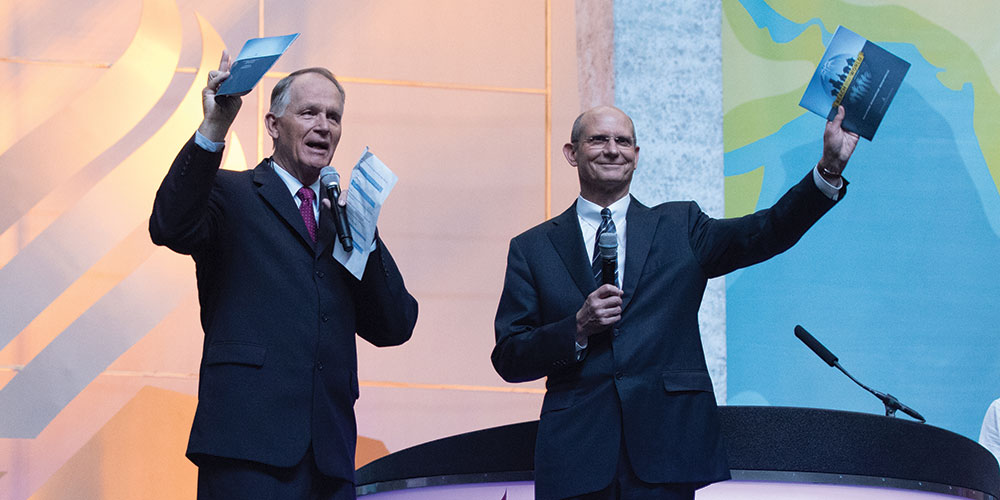 Question: “What do 10 Days of Prayer,” “Believe His Prophets,” and “United in Prayer” have in common?

Answer: They are three ways that you can participate in the Seventh-day Adventist Church’s new strategic plan.

Church leaders are encouraging each of the world church’s 18.5 million members to find a way to get personally involved in the Adventist Church’s new five-year “Reach the World” strategic plan after the General Conference (GC) session ends in San Antonio.

The plan, which will be implemented from 2015 to 2020, is based on the results of a two-year survey of more than 41,000 current and former church members worldwide and approved by church leaders at the Annual Council last fall. It aims to provide vision and direction in carrying out the church’s mission of preparing people for the return of Jesus.

“We are a church that believes in the priesthood of all believers and believes that multiple gifts have been given to various people,” said Michael L. Ryan, general vice president of the Adventist world church, who spearheaded the strategic plan. “Not everyone has the same gift. The items that are in the strategic plan are critical for advancing mission.”

Initiatives such as “Believe His Prophets”—an online Bible study plan that will expand on the previous quinquennium’s Bible study plan, “Revived by His Word,” to include seven books by church cofounder Ellen G. White—seek to nurture church members’ relationship with God by encouraging them to spend more time reading the Bible and the Spirit of Prophecy, as White’s writings are known.

Church leaders are concerned about members’ reading patterns. Less than half of Adventists—42 percent—read the Bible at least once a day, while 32 percent read two or more times a week and 2 percent never read the Bible, according to the survey conducted from 2011 to 2013 by the world church’s Office of Archives, Statistics, and Research. Only 16 percent of respondents read Ellen White’s writings daily, and 19 percent said they have never read it.

Church leaders link the lack of time spent in Bible study and other devotional activities with a creeping growth of uncertainty among church members about the state of the dead; the recent, literal creation week described in Genesis; and the imminence of Jesus’ return.

The research used in “Reach the World” is the most comprehensive of any data collected for the church’s strategic plan, said David Trim, director of the Office of Archives, Statistics, and Research.

“This is not based on church leaders picking up anecdotal evidence but based on robust data,” Trim added.

Every General Conference department and division of the world church is tasked with creating initiatives to advance the strategic plan. The General Conference’s Ministerial Association under its “Revival and Reformation” program organized “10 Days of Prayer,” a special time of prayer and Bible study that has been organized annually since 2013. The department also organized “United in Prayer,” an initiative that sought a deeper outpouring of the Holy Spirit among church members and an anticipation of God’s blessings at the GC session. The Ministerial Association also oversees “Revived by His Word” and “Believe His Prophets.”

Among the newer initiatives expected to continue for the next five years are “Mission to the Cities,” which seeks to share Jesus in the world’s biggest cities, and “Comprehensive Health Ministry,” which aims to meet the physical and spiritual needs of communities through free clinics, health expos, and community health centers in local church buildings.

Some church divisions have seen membership soar under their local initiatives, including the Southern Africa-Indian Ocean Division with “One Member, One Soul,” which encourages every member to reach at least one person for Jesus every year. Members choose any method they like: personal evangelism, small groups, community services, Bible studies, or Christ’s method of meeting physical needs first, said division president Paul S. Ratsara.

“To God be the glory, evangelism is a way of life in the Southern Africa-Indian Ocean Division,” Ratsara said.

Some of the enduring initiatives that emerged from the world church’s previous strategic plans include the Adventist Development and Relief Agency (ADRA) and the Sanitarium Health and Wellbeing Company, producer of Weet-Bix, Australia’s top-selling breakfast cereal.

Ryan, the general vice president, said the main message that church members should take from the church’s new strategic plan is to participate in one or more initiatives.

“Find one. Pick one. Become involved somewhere in the plan,” Ryan said. “If you find that the wide range of outreach initiatives does not provide something, look around, explore, and try to find one of your own.”