What if God is an Atheist? 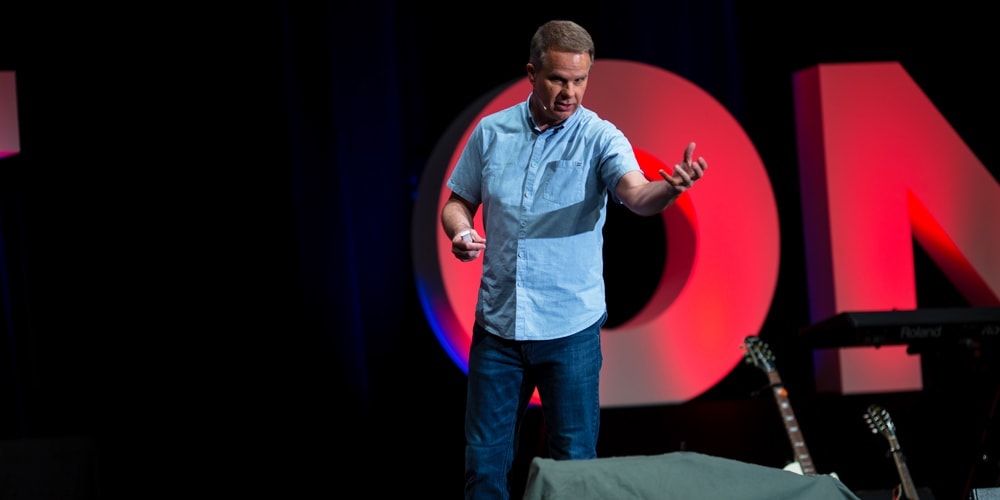 Small groups discussing challenging questions on a park bench, strangers praying together, spontaneous outbursts of group singing at metro stations. These are only some of the almost hourly occurrences visible at the 2018 Global Youth Leaders Congress in Kassel, Germany.

Is God an Atheist?

Starting a morning series on the second day of the congress, Ty Gibson, co-director of Light Bearers Ministry, asked a startling question: what if God is an atheist? Having gotten the attention of the crowd, Gibson used multiple cultural references—from celebrities to Richard Dawkins—to build a case for the idea the many choose not to believe in God because of the way God has been portrayed by others.

Gibson referenced the term “justice generation” to describe those “who are fed up with the dastardly deeds done in the name of God.” Among those, he suggested, are violence, misogyny, inequality, racism, homophobia, xenophobia and political corruption.

Gibson explained his earlier “is God an atheist” play on words saying, “What if God doesn’t believe in himself in the way that he is represented?”

This misunderstanding of God’s character and an inaccurate portrayal of his values by people, argued Gibson, is a leading cause of people leaving the Church and ultimately leaving God. “We are living at a major transitional point in history where bad religion is giving birth to widespread atheism,” he said. “Atheism is the abused child of Christianity.”

Which is where the Seventh-day Adventist Church comes in, according to Gibson. “Adventism was born to the stage of history to paint an alternative picture of God,” he contended. Pointing to various Adventist beliefs such as annihilationism (not teaching an eternally burning hellfire), he suggested that “we just happen to not believe what many unbelievers find unbelievable.”

However Gibson challenged attendees to consider that infighting among believers over what he called “non-essential issues” is hindering the church in its mission. “If we elevate non-essential issues to the level of doctrine, we kill our prophetic calling,” he said.

“We are called to prophecy to the world about the most beautiful, unprecedented unparalleled, love in the universe in the person of Jesus Christ,” concluded Gibson. “The portfolio of doctrinal truths that God has given to us only serve their purpose to the degree that we harness them to paint this picture of God’s character.”

A Menu of Resources

Center stage youth ministry resources continued to be featured throughout the day. Among them, Global Youth Day (GYD), an annual event that generates thousands of simultaneous service projects around the world. “We wanted a catalyst that would galvanize all Adventist youth,” said Gilbert Cangy, former world church youth director and Global Youth Day founder. “GYD was meant to get the youth from their pews and into service.” GYD operates under the slogan “Be the Sermon.”

Gary Blanchard, current world youth director introduced a subsequent component of GYD, which he called “Preach the Sermon.” Following acts of service within their communities, young Adventists are encouraged to organize an evangelistic meeting the week following GYD.

The Nature of Church

David Asscherick’s third sermonic installment focused on the nature of church. “How does God intend church to be done?” he asked at the outset of the message.

Asscherick next unpacked the challenge that the New Testatment Jewish community had in integrating Gentiles into their faith. “In Jewish thinking, there were Jews and then there was everyone else in one homogenous category,” said Asscherick. He then delivered a short biblical history lesson on how sin broke both vertical (God and mankind) and horizontal relationships and how the tower of Babel experience further separated mankind, before suggesting a reversal of those realities in the New Testament. For instance, “Pentecost is a reversal of the tower of Babel,” he suggested. It was “the promise that God is putting the human family back together.”

However first century Jewish leaders struggled with this and resisted integration. Asscherick drew parallels with the current Church. “The church is not called to live in the world of ‘us and them,’” he said. “We have to get out of the wall business and get into the bridge business.” Referencing Acts 15:19, which quotes the apostle James as saying, “we should not make it difficult for the Gentiles who are turning to God,” Asscherick rephrased it in the positive saying “we should make it as easy as possible for people to come to Jesus.”

“This requires soul searching,” he concluded. “Have we built bridges or walls? The gospel is for the world and we have to stop pretending that the gospel is only for us.”