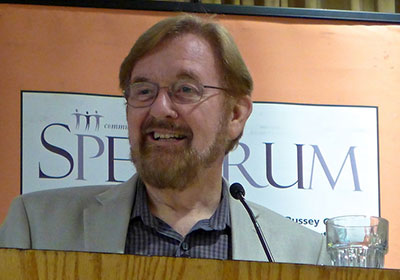 Three former and current Seventh-day Adventist leaders — a social justice advocate, a General Conference treasurer, and a female conference president — were honored on Sabbath for their contributions to the Adventist Church.

Lemon, who retired last year after serving as General Conference treasurer since 2002; and Roberts, who became the church’s first female conference president upon her election in Southeastern California in 2013, accepted their Weniger Award for Excellence on the platform at the front of the sanctuary.

Branson, a decades-long educator, ethicist, and social justice advocate, died of a heart attack last July at the age of 78, and his award was accepted by a long-time friend, Donna L. Carson.

“I have no personal accomplishments that are deserving of honor. All honor belongs to God,” Lemon said in his acceptance speech, broadcast live on the university church’s website.

“But I accept this recognition, not on my behalf, but on behalf of the thousands of church treasurers, financial administrators, and auditors around the world — from the General Conference level up to the local church level — who work tirelessly in the service of the Lord,” he said. “It is these individuals, mostly unnoticed and unrecognized, who deserve the recognition.”

Roberts, speaking to the Adventist Review, also voiced a desire to share the award with others — specifically those who had nurtured her over the years.

“I am honored to receive this award today, and it evokes my deepest gratitude for the multitudes of women and men who have poured themselves into my life through mentoring, inspiring, teaching, modeling, and encouraging me,” she said.

The Weniger Society was established in 1974 by the late U.S. Representative Jerry Pettis and the late dentist Clinton Emmerson, former students of Charles Weniger, to honor people who demonstrate the servanthood and compassion associated with Weniger (1896-1964). A noted scholar and public speaker, Weniger taught and held leadership positions at the Seventh-day Adventist Theological Seminary and other church educational institutions.

The Weniger award, considered one of the most prestigious honors bestowed by a church entity, has been presented to about 160 people over the past 40 years. Last year’s recipients were former Adventist Review editor William G. Johnsson, former Adventist Church chief archivist Bert B. Haloviak, and Adventist religious freedom champion Bert B. Beach.

“This dual role was not always appreciated. In fact, it cost him a great deal, and his commitment to the church was often questioned,” Paulien told the Adventist Review. “But he never wavered from that commitment in spite of misrepresentation. While others facing criticism from the church often give up on both the local church and the world organization, he remained deeply involved with a positive spirit to the very end.”

“When Roy was appointed associate dean of the School of Religion, some feared that he was too large a figure to assume a subordinate role,” he said. “But I found him loyal and supportive in every way, seeking the success of the school and my success as dean as his top priority. He never shied away from expressing his concerns, but he did so in a way that was supportive of my role. He truly had a servant spirit.”

Branson, who held a doctorate in religious ethics from Harvard University, established the Christian Ethics program at the Seventh-day Adventist Theological Seminary while teaching at Andrews University in Berrien Springs, Michigan, and worked as a professor at Georgetown University and Columbia Union College (now Washington Adventist University) near Washington D.C.

"A Baton in My Hand"

Lemon, born to missionary parents in the Democratic Republic of Congo, returned to that country, then renamed Zaire, two years after graduating from Columbia Union College in 1972. He speaks fluent English and Swahili.

After four years auditing the Zaire Union’s books, Lemon became union treasurer (1978-1982) and then assistant treasurer of the Africa-Indian Ocean Division based in the Ivory Coast (1982–1985). He earned an MBA in 1988 while serving as director of financial records at Andrew University, and worked for seven years as a treasurer for the church in Canada. In 1995, he was elected associate treasurer of the General Conference.

Lemon expressed gratitude to the example of Christian service modeled by his parents, educators, and others.

“During my professional life, I also have been greatly blessed by working with, and being mentored by, many truly godly leaders,” Lemon said in his speech.

Roberts, who served as executive secretary of the Southeastern California Conference from 2004 until she was elected president in 2013, spoke about a need to encourage young people to carry out the church’s mission.

“Today I am reminded that I am just one more person with a baton in my hand to carry out the mission of our church — and I love our church,” she said in her acceptance speech.

Before becoming a church administrator, Roberts worked as a teacher, chaplain, youth director, and pastor. She received a master’s degree from Andrews University in 1984 and a doctor of ministry degree from Claremont School of Theology in California in 2006.

In the interview, Roberts said leadership was “not an individual accomplishment but a joint venture.”

“I am forever grateful for my colleagues and the team of leaders I have been privileged to work with,” she said. “This award reflects all of these vital people God has used to shape and form my ministry. This is for every one of us!”