We Are Commanded to Lead Dangerously, Adventist Youth Leader Says 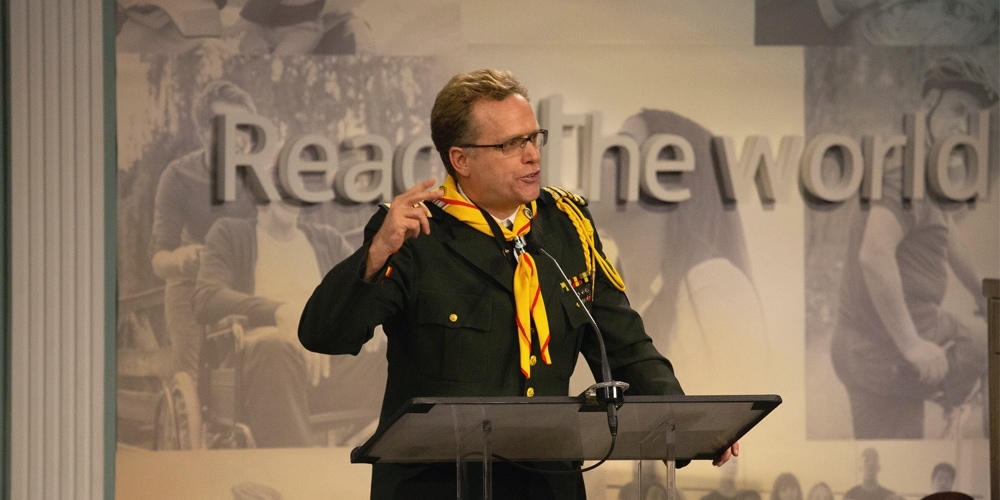 Young people are designed to live dangerously, and adult leaders are commanded to lead them dangerously for the Lord. So said Adventist Church youth director Gary Blanchard, on the opening night of the 2019 Annual Council at the church’s headquarters in Silver Spring, Maryland, United States, on October 10, 2019.

Hundreds of members and invitees of the General Conference Executive Committee will meet October 10-16 to worship together, accept or reject reports, and vote on policies and initiatives of the church. Annual Council is one of the two annual business meetings of the Adventist Church and the most important after the General Conference Session, which takes place every five years.

As has become usual in the past few years, the first sessions of Annual Council are spent in a training event known as the Leadership Education and Development (LEAD) Conference. LEAD meetings usually provide Executive Committee members with practical information on one specific topic or area. The 2019 LEAD Conference, entitled “Pass It On,” is focused on Adventist youth ministries and its reports, plans, and outreach and mission initiatives. It was in that context that Blanchard called leaders to “lead dangerously.”

Blanchard based his opening devotional message on the Bible story of Joshua as the leader of God’s people after Moses’ death. He reminded the audience that Joshua was called to lead people younger than himself, as almost every one of his contemporaries had perished in the desert before reaching Canaan. Contemporary church leaders, Blanchard emphasized, are called to lead in a similar manner.

“Just like Joshua, you are called to lead the younger generation,” he said, “and you are on dangerous ground if you do not see yourself as a youth leader.”

That transmission of the mandate to lead, that “passing of the baton,” should inform everything adult leaders do, Blanchard said.

At the same time, Blanchard acknowledged that in the past, the emphasis on youth leadership may not have always been the best approach.

“It has been often said that leaders need to allow young people to go out and lead. It has been said, ‘Just train them and send them,’” Blanchard said. But it might not have been the best approach, he acknowledged, as God is looking for an intergenerational movement of people willing to work side by side to reach out to others.

“Remember it’s ‘Pass It On,’ not ‘Dump It On,’” he said, playing on the theme of the youth ministries department and the 2019 LEAD Conference. “God wants [adult church leaders] to be leader makers; we need each other,” Blanchard said.

“Young people were designed to live dangerously,” he said. “If we don’t lead them dangerously for the Lord, the devil will.”

Leading dangerously means being willing to show the same courage Joshua had when the Lord promised that He would be with him wherever he went. It is a type of courage, Blanchard said, that will motivate young people to answer just as the people of Israel did to Joshua.

“They told Joshua, ‘All that you command us we will do, and wherever you send us we will go,’” Blanchard read from Joshua 1:16. “Joshua needed the courage to lead, and we need similar courage,” he said.

Now that we know young people live dangerously, we must acknowledge that they need leaders willing to lead them, Blanchard emphasized. It is something of utmost importance, he said, as we move to share the Bible message for this time with every major city in the world.

Singling out initiatives such as One Year in Mission (OYIM), which has seen thousands of young people serving in dozens of focus cities around the world, Blanchard called leaders to tap into that potential even more for reaching out to urban centers.

“We must reach the cities of the world, and young people are ready to be sent, even to the most dangerous places,” Blanchard said. “We must be willing to let them go and also go together with them.”

Once more, Blanchard affirmed the need for intergenerational mission work.

“We must stop leading from the back, saying, ‘Go, get them, kids!’; we must lead from the front,” he said.