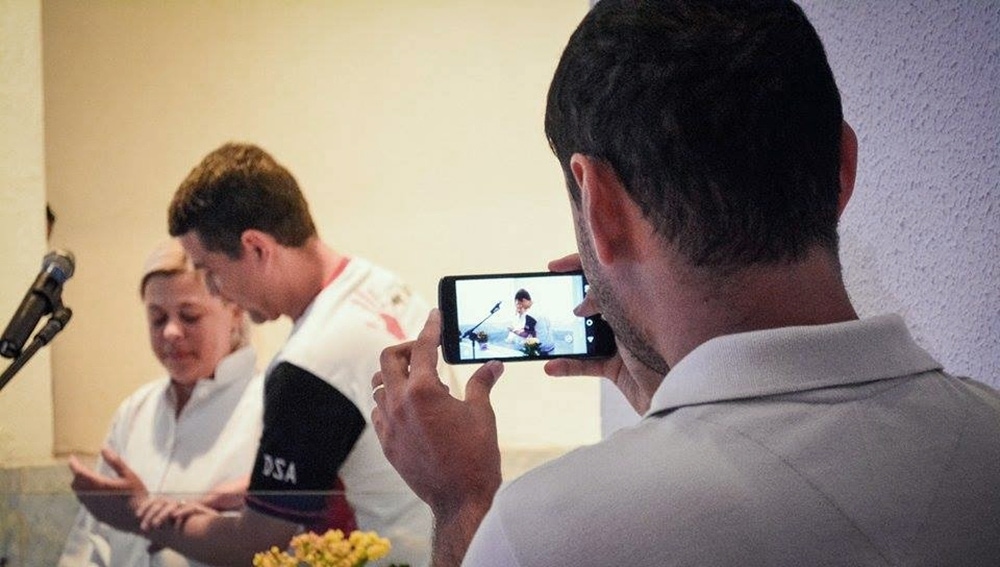 By MARK A. KELLNER, with JEFFERSON PARADELLO, ASN

For those wondering how today’s outreach technology of broadcasting, Facebook, and digital media can mesh with the one-to-one approach that has marked the church since New Testament times, the story of Leidiane Santos and her family, in São Paulo, Brazil, might be instructive.

The Santoses were baptized on Sabbath, January 28, following a period of Bible study and church attendance. How they got to the Parque Figueira Grande São Paulo Seventh-day Adventist Church, is a more intriguing story.

For two years, Leidiane Santos and her family watched programming on Novo Tempo, the Adventist television network in Brazil. Watching Pastor Luís Gonçalves, a favorite presenter from the program “Arena do Futuro,” they heard him encourage viewers to visit an Adventist congregation, and Leidiane took note.

"I always prayed to the Lord that He would show me the right place for us," Leidiane said. The Santos family had visited other denominations, but something was missing.

That missing dimension was located at the Parque Figueira congregation. First to visit was José Vieira Santos, Lediane’s husband. She said “he was very well received,” and that nudged her towards visiting as well.

When Lediane walked into the church, she recalled, “I felt at home. My heart rejoiced and I said: ‘here is the right church’, because the brethren welcomed us very well. Everyone was happy to see us. They welcomed us. There are times in one’s life when you need a friendly word, and there I found that.”

Welcoming newcomers and visitors to church has been a particular emphasis of the South American Division in recent years, and Rafael Rossi, communication director for the division, said it’s important to remember that newcomers may not know anyone in a congregation.

“This welcoming cannot be mechanical, but should represent a lifestyle of hospitality,” Rossi explained. He said Adventists “are called to share the gospel so others will have the same encounter with Jesus that we once had. And it is in this sense that we must care for and welcome people so that they see in us what Christ once did in our lives.”

Soon after their first visit, the Santoses began to study the Bible with two couples from Parque Figueira, attend regular meetings, and engage in other activities. They made friends and together began meeting Adventists apart from church services.

“Today, I even get excited because I can say that I have the peace and happiness that I have never had.”

Seven months after entering an Adventist congregation for the first time, they were all baptized. Each family member is already active: Leidiane is a Sabbath School teacher, José sings in the choir, and the children participate in the Pathfinder Club.

“Today, I even get excited because I can say that I have the peace and happiness that I have never had,” Lediane said.

Roberto Roberti, a Bible instructor who contacts interested people responding to the Adventist Church’s Facebook page, spoke with Leidiane before the family visited the church and offered an online Bible study. This was one of the steps that also contributed to the decision of the whole family to attend the church and join.

Roberti, who conducted 2,000 online Bible studies in 2016, emphasized the importance of each member becoming responsible for providing a welcoming environment for those who come to the congregation.

“Despite having online contact with these people on a daily basis, there is nothing better than meeting face-to-face. So the reception is fundamental, because through Facebook we always try to demonstrate how important this person is to God and to the church. If they are not received in a loving way, we run the risk that they will never return,” he added.