War, Famine, and a Church of Hope in South Sudan 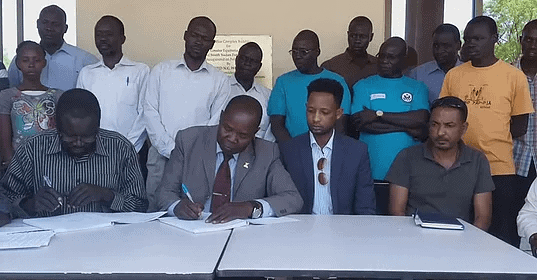 The Seventh-day Adventist Church, represented by the leaders of the Greater Equatoria Field, has begun construction of a mega-church complex near its headquarters in Juba, South Sudan’s capital city.

The Adventist Church entered Sudan in the 1970’s. Since then, the church has witnessed significant growth even under the most difficult circumstances. For most of its history, Sudan has been embroiled in serious armed conflicts.

War erupted in 1983, not long after the church arrived around 1979. The conflict lasted 21 years until the Comprehensive Peace Agreement was signed in 2005, which ultimately ended up in South Sudan independence in 2011.

Since that time, the church has never had a permanent building to accommodate its growing membership, particularly in Juba. The church, which had less than 200 worshipers in 2007 and just a single worship location at its current headquarters, has now grown to over ten congregations in Juba, including two very large churches.

The small and aging building from the 1980’s was no longer able to accommodate the ever-growing number of worshipers that meet every Sabbath.

Church members then decided to take a bold step of faith and build a decent and modern sanctuary that will seat 3,500 people, and which will include offices and a children's chapel. “We’ll build the new church by faith even in troubled times,” said one of the construction committee members responsible for raising money and overseeing the construction process.

Various questions have been asked. How in a time of distress can members dare to think of such a major project, especially considering that South Sudan is suffering from high inflation and an economic meltdown? Why build in a country where many are starving, with millions either displaced or living as refugees in other countries?

“Well, we just want to honor God, so there’s no best time,” said one of the leaders. “God is God regardless of what happened before, or what happens now or in the future. He remains God, and He is the same yesterday, today and forever. He is the God who deserves our worship, praises and honor.”

The project is becoming almost a repetition of Nehemiah’s story in the Bible, said church leaders. Nehemiah—the main character of an Old Testament book bearing his name—decided he would move back from exile to rebuild the ruined walls of Jerusalem. His decision was born out of faith, fear of God and will to honor Him.

“According to the Bible, before stepping forward, he delved into prayer, seeking approval and support from the God of heaven,” leaders said. “Though facing opposition and hardship at the time, he was determined to see the job accomplished under God’s guidance and help.”

Construction work started early in 2017. The church in Juba is moving forward in faith believing that the God who provided resources for the children of Israel while journeying in the desert is with them, will see them through until the dreams of this sanctuary become a reality.

“Please pray for the church in Juba,” leaders asked, “as we embark on this new project.”