Vigil Reminds Me That Justice Is Part of Adventist Faith 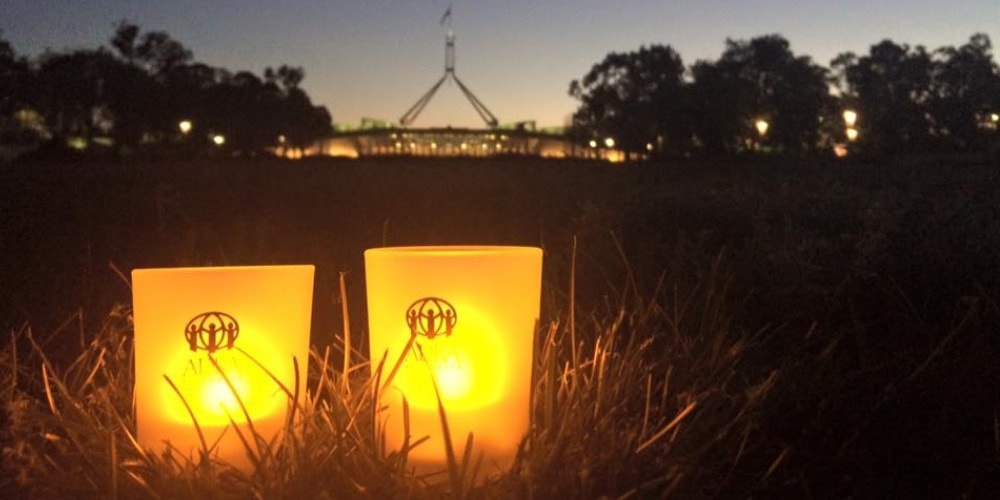 I grew up singing “This little light of mine, I’m gonna let it shine,” but I don’t seem to have sung it for quite a while now.

I have been proudly wearing my “I’m shining my light” Adventist Development and Relief Agency T-shirt this year, but I experienced shining “this little light of mine” in a different way at the Parliament House in Canberra, Australia, over the past four days.

The exact moment came at the end of a busy day during which our “lobby group” of six Adventists met with four members of the House of Representatives, senators, or their staffers from our region. We celebrated the progress around the world over the past 25 years in halving the number of people living in extreme poverty. We expressed appreciation for the difference Australian aid makes in the world. We expressed disappointment at cuts to aid budgets that mean Australia’s giving as a nation is at the least generous levels of any time in its aid history. We urged greater action to limit climate change, particularly as this could undo so much of the development that has helped the world’s poor in the past 50 years.

As the sun set, we gathered quietly on the lawn in front of the Parliament House to pray with more than 100 other Christians from every state and territory of Australia. The candlelight prayer vigil formed part of Micah Australia’s annual Voices for Justice.

We prayed for our nation and its leaders, for our churches and their work and witness, and for the world’s poor and the crises and challenges they face. Then we placed our small candles on a big map of the world, slowly filling the continents with the light of our prayers.

It’s remarkable how the context in which the Bible is read dramatically influences its feel and its impact. During the vigil, participants read from the Hebrew prophets, the Psalms, the gospels and the letters of Paul, highlighting the many verses that call for kings and nations to ensure justice and concern for the poor remain top priorities and core practice. Standing under the darkening sky facing the beautifully lit building, these verses echoed with a renewed poignancy.

But many of the verses also call God’s people to be those who remind their leaders and their societies of the needs of those whose voices are often easy to ignore. For example, there is a simple reason why it has been easy for our governments to disproportionately cut Australia’s aid over the past few years: those who are most affected, those who will die as a result, have no voice or vote in Australia. So the Bible prompts the faithful people of God to “speak up for those who cannot speak for themselves; ensure justice for those being crushed. Yes, speak up for the poor and helpless, and see that they get justice” (Proverbs 31:8, 9, NLT).

Some years ago, a sermon by the late Warren Banfield, a black American minister and Seventh-day Adventist Church leader who had been a friend of civil rights leader Martin Luther King Jr, inspired me to think about our call to do justice as a vital part of our Adventist faith. In his 80s at the time of preaching the sermon, Banfield shared his dream for the church marching in his national capital to “cry out against injustice” while singing “this little light of mine, I’m gonna let it shine.”

On that night in my nation’s capital, I realized with a few fellow Adventist Church members — together with many other Christians — I had helped fulfill Banfield’s dream in a small way. Although we didn’t sing the song, we were living it — and a light on a hill cannot be hidden, even on parliament’s Capital Hill.

“You are the light of the world — like a city on a hilltop that cannot be hidden. No one lights a lamp and then puts it under a basket. Instead, a lamp is placed on a stand, where it gives light to everyone in the house.In the same way, let your good deeds shine out for all to see, so that everyone will praise your heavenly Father” (Matthew 5:14–16).

A version of this commentary appeared on the website of the Avondale College of Higher Education, which had several students at the vigil.

Article
Faith on Fire!
We are called to let our lights shine for Jesus.
Article
Passing On a Legacy of Faith
It’s the greatest gift you can give to your children.
Magazine Article
After the Dust Settles
Adventist public engagement after the tumultuous year 2020.