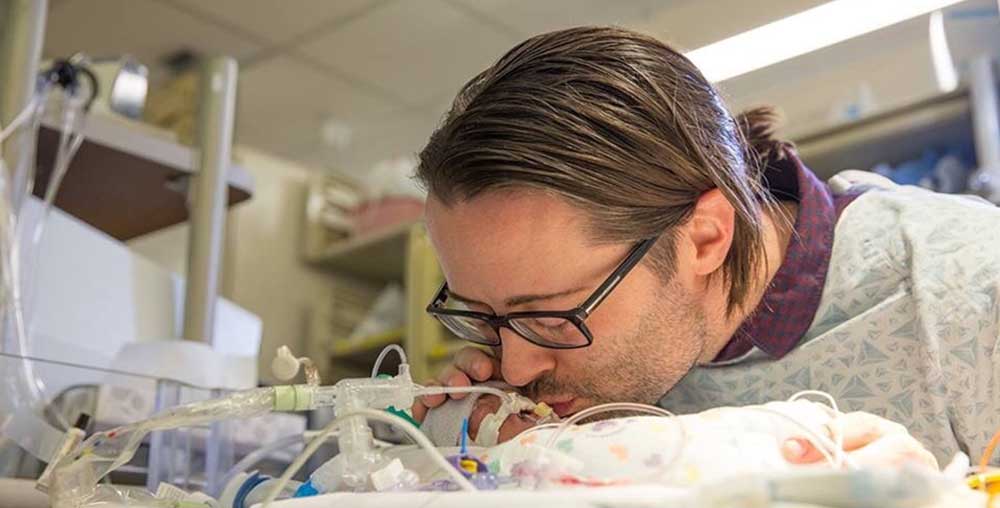 Read a report about the November 15 memorial service.

A poignant video of an Adventist song leader from Loma Linda University singing a farewell lullaby to his dying infant son just days after his wife died following a Caesarean section has gone viral.

Chris Picco, a professional recording artist who leads university chapel song services, tenderly sang Paul McCartney’s “Blackbird” on his guitar at the bedside of his 4-day-old son, Lennon James, on November 11, hours before the boy died in his father’s arms.

Lennon was delivered in an emergency Caesarean section at Loma Linda University Children's Hospital after his mother, Ashley, 30, died in her sleep on November 8. He was born 16 weeks early.

“Ashley would often feel Lennon moving to music so I brought my guitar today and gave him a little concert,” Chris wrote on a memorial page to his wife. “Continue to pray for a miracle for my precious, perfect little guy!”

But hours later, Chris wrote in another post that his son had died.

“It is with an unbelievably heavy heart that I write this,” he said. “My little fighter, Lennon James Picco went to sleep in his daddy’s arms late last night. He was surrounded by family, friends, and the best doctors, nurses and hospital staff in the world.

“He was dressed in an outfit that Ashley bought for him, with little guitars on it, and wrapped in a blanket made by a dear friend. I am so thankful for the four unforgettable days I got to spend with him. His mommy would have been so beyond joy to see him and to hold him, touch him, bathe him, sing to him — as I have had the privilege of doing. I have been so blessed and honored to love him before he was formed, to cherish him while mommy carried him, meet him face to precious face, and hold his perfect little body while we said, ‘Goodbye for now.’

He added: “There are no words, but I wanted to keep you updated, as your love and support has meant more than anything in the world. All you need is love.”

K.C. Hohensee, a family friend who recorded the YouTube video of Chris playing at his son’s incubator, said the medical team at the hospital did their best to save the baby.

The video, posted on November 12, had passed 3.28 million views by late Thursday night. The story of Chris’ tragic loss and the video was carried by news organizations around the world, including Britain’s Independent newspaper, The Huffington Post, and Fox News.

GOODBYE SONG: The YouTube video that has gone viral.

A fundraising page created by the Loma Linda University Church to assist Chris with medical expenses and to ease his financial burden in the upcoming months quickly surpassed its $50,000 goal, topping $100,000 late Thursday.

The Loma Linda University Church will hold a memorial service at 7:30 p.m. on Sabbath, November 15. The service will be live-streamed on its website, lluc.org.

Brett Walls, who is acting as a spokesman for Chris, said Chris planned to stay out of public sight for the next few days as he grieved with family and friends.

"He recognizes the chord this is striking with people and would be interested in seeing how we could partner to bring healing to others who are suffering," Walls said by e-mail.

Shortly after the terror attacks of Sept. 11, 2001, she traveled to New York to volunteer at Ladder 10 Fire Station at Ground Zero, where she met her future husband, Chris, who was also volunteering there, Hohensee said in a separate online tribute to Ashley and Lennon James. The couple married on August 19, 2007.

Ashley, who trained as a nurse, unexpectedly died in her sleep several hours after giving birth to Lennon James on November 8.

“But her song continues, the harmony enriching our lives, still, to be continued until in the heavenly kingdom, when we will all sing the Song of Moses and the Lamb,” Hohensee said.

“And Lennon James will add his sweet voice to the family reunion on Resurrection Day, as daddy Chris joins in the most precious of all songs he sang in his life, and all the praying friends and family will join in lifting their hallelujahs for eternity,” he said. “New anthems to write, new songs to sing, and no more loss, parting, pain or sorrow.”

MY FATHER'S WORLD: Chris Picco singing "This Is My Father's World" in a video recording released by Adventist Mission last year.