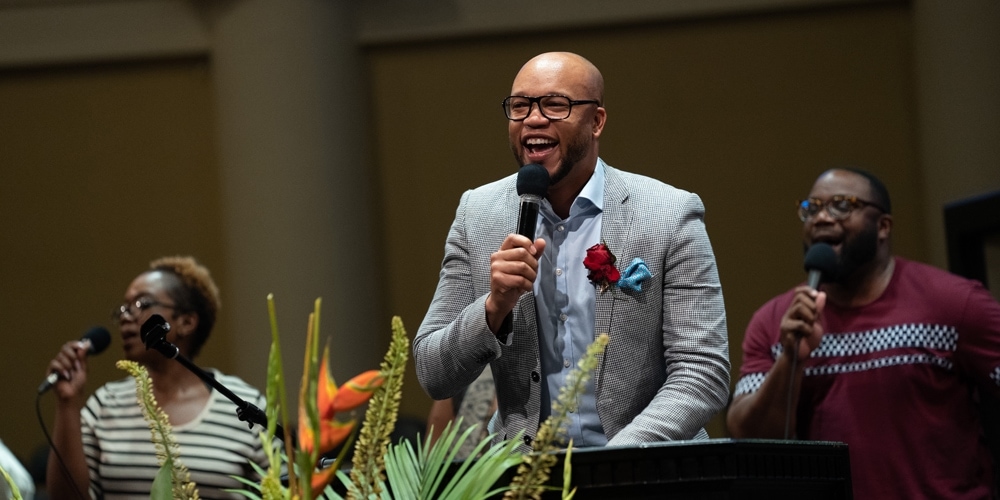 This year’s theme was “Time to Engage.” For next year, in 2020, the camp meeting will meet in a new place. And it’s all part of a plan.

The goal of Urban Camp Meeting is outreach, and every two years it moves to a new city in the region. In each two-year rotation, the first year’s goal is to lay the groundwork for evangelism, while the second year has a strong emphasis on citywide evangelism.

For the second and final year in Stockton, about 1,000 people attended throughout the three-day event.

With the engagement theme in mind, the camp meeting focused on immigration, with workshops and laity training for immigrants and providing immigrants with needed resources.

“We’re trying to equip ourselves, educate ourselves, train ourselves [in] how do we help our brothers and sisters,” said Willie Johnson, African-American Ministries coordinator for the Northern California Conference.

Other workshops on Friday included topics like the power of rest for ministry effectiveness and a cooking class by chef GW Chew of The Veg Hub restaurant in Oakland. Immanuel Temple's health van was onsite to offer blood pressure and diabetes testing, as well as health consultations.

The lead-in for this year's camp meeting was a small mission trip to work on a project with Habitat for Humanity in Stockton. For three and a half days, young people from six different churches worked on three house-building projects.

“We’ve been out here in this 100-degree weather building homes for families that need homes,” said Moises Ramirez, youth pastor of the Grand Advent Seventh-day Adventist Church. “We want to be a body of Christians that engage with more than just Seventh-day Adventists; more than just the people we see every Sabbath. And the best way of doing it, the most interactive, and the most difficult work was us getting out there [with] our hands and blessing someone.”

“You know what makes Urban Camp Meeting different than any other camp meeting? It’s focusing on our cities. We have a mission to our cities,” said Marc Woodson, president of the Northern California Conference.

“It’s kind of funny to talk about a camp meeting when you’re talking about a city, but you know camp meeting is really about God’s people coming together to be a part of an initiative that will make a difference in our cities and in our communities, where our people are,” he added.

Currently, literature evangelism students from SOULS West (Pacific Union Conference’s evangelism training school) and Youth Rush are canvassing the Stockton area, with their efforts to be followed up with Bible work. In September, a health event for the community will be held; and in October, evangelist José Rojas will conduct meetings.

The goal is to raise two churches before the camp meeting moves on to Oakland, where next year’s Urban Camp Meeting will start its two-year cycle.

In aiming to focus on relevant ministries, from the inception the leadership chose social justice as a theme. Johnson notes they have been asking questions such as, “What role can the church play?” and “How do we prepare our members to be advocates in the community without violating the law [and] while being true to the Bible and what it teaches?”

“There has been something special, something sacred about this year’s Urban Camp Meeting,” Nunes said. “It has really been a time of encouraging us and inspiring people to get out into the communities. We want to be God’s hands and feet and His heart here in the community of Stockton.”