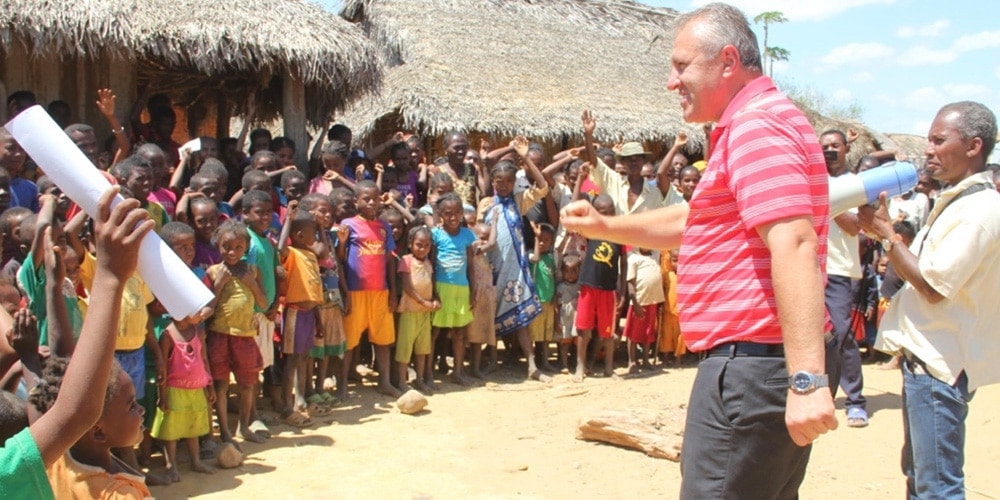 Over a period of four months starting in February 2019, Seventh-day Adventists conducted 431 evangelistic programs in Madagascar, which resulted in 2,012 baptisms.

This is the largest number of baptisms ever in that region, leaders said. Twenty pastors from the local conference and many church members participated in the gospel events in the two northern regions of the country — Diana and Sava.

A Ukrainian businessman, Vasyl Stoyka, currently living in the Czech Republic, was one of the active missionaries and the initiator of several charity projects. In April and May, Stoyka conducted a program in two cities — Ambodiampana and Ambanja. Also, with the financial help of Stoyka as well as money donated by several others, Adventists implemented ten charitable projects, such as the construction of churches and schools.

One of the largest baptisms this year took place in the city of Sambava. On April 27, 1,519 people were baptized. Those were people from several different cities who had been preparing for this event for three months. Several hundred more people, including those from Stoyka’s programs, were baptized after that day. Darany Soatra Bruno, a pastor from the Eastern Dnieper Conference of the Ukrainian Union Conference and a native of Madagascar, helped a Ukrainian evangelist with the translation.

Among the charity projects implemented by Stoyka in Madagascar is the construction of a school, which was started with sponsorship money in 2016. It is expected the project will be completed this year, leaders said. Workers are installing windows and doors in the building and laying a cement floor. Doors and windows were also installed in the church in Ambodiampana.

Workers completed five houses of prayer in Ambanja. Adventists are also giving the final touches to a school and two more churches in Sofia.

Stoyka, the initiator and one of the sponsors of these projects, emphasizes, “We came not only for the sake of the program. I know a pastor can hold it, but I want to help the people of Madagascar in solving important problems.”

Stoyka has been visiting Madagascar and other African countries for a number of years. Since 2012, about 100 evangelistic programs were held in Madagascar with his participation. During this time, about 50 prayer houses were built. Four schools have been built from the ground up, and ten schools completed. Overall, Stoyka and his assistants have implemented about 200 construction projects.

In addition to constructing schools and churches, Adventists are teaching people how to remove garbage in cities, dig wells, visit prisons, and conduct programs for children, organizers said.

“We appreciate your help so much,” North Malagasy Conference church leaders wrote in a letter of appreciation sent to sponsors. “We want to thank you for sending us Brother Stoyka as a speaker and Soatra Bruno as a translator during the evangelistic series. They worked very hard; their guidance was influential. To continue the activities that we already started within our Conference, we plan and pray to God so that we may have the same program next year.”

Ukrainian Union Conference president Stanislav Nosov said he appreciates what Stoyka is doing in the context of cross-cultural mission.

“Missionaries from Europe came to Ukraine with a message of hope, and now Ukrainians themselves, such as Stoyka, support others,” he said. “There are Madagascans among the Ukrainian pastors, and there are a number of ministers who are ready to sacrifice their time to come to Africa with evangelistic programs and welfare work.”

Euro-Asia Division personal ministries director Dmitriy Zubkov agreed, praising Stoyka’s efforts. “Stoyka is one of those people who dream, set a goal, achieve the goal to bring a few more people, hundreds, and possibly thousands to God,” he said.

Stoyka comes from the Transcarpathian region of Ukraine. He moved to the Czech Republic about 20 years ago. When Stoyka earned his first million, he lived like any well-off person in this world. But in 2005, he was diagnosed with a brain tumor and went through surgery. During his life, Stoyka suffered about twenty operations due to various diseases.

Ten years ago, in one of those bouts with disease, Stoyka visited the Adventist sanitarium called “Our Home” in Ukraine. Eventually, Stoyka and his wife joined the church and were baptized.

Stoyka started helping the inhabitants of the African continent after visiting Uganda. There he saw the condition of children suffering from AIDS. Stoyka decided to step in and build the best school for them, which at that time cost about 1,410 euros.

“I promised God that as long as I can, I would go to these far-away countries in Africa,” he said.