Tornado Rips Off Adventist Church’s Roof as Members Pray Inside 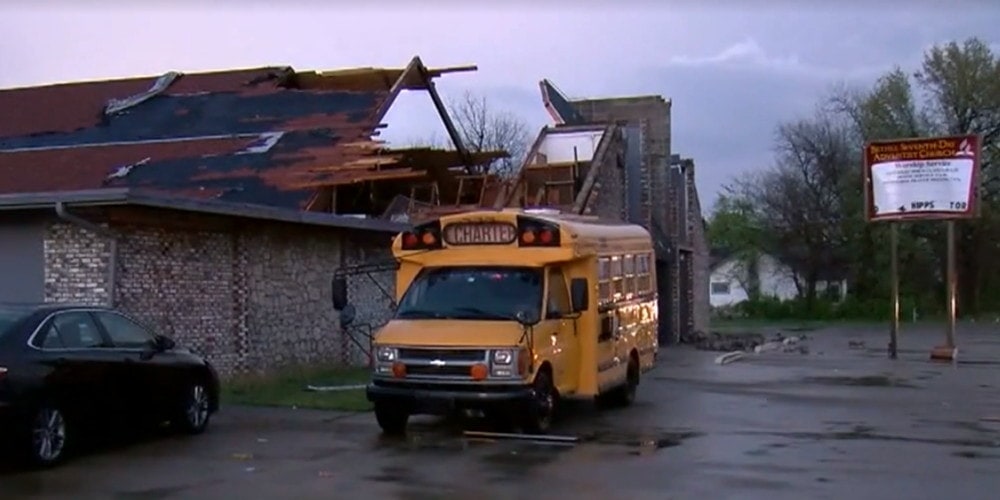 A tornado tore the roof off a Seventh-day Adventist church in the U.S. state of Oklahoma while church members huddled in a cramped corner in prayer, a church officer said Thursday.

Miraculously, no one was injured in the storm that struck the Bethel Adventist Church in Tulsa during prayer meeting on Wednesday night.

“God spared our lives for a purpose, if you could see the real magnitude of the damage and how blessed we are,” Ella Suttle, assistant clerk to the church’s pastor, told the Adventist Review. “We have a lot to tell the people around us and be a witness for Jesus.”

Multiple tornadoes touched down in Tulsa on Wednesday night as a storm blew across the region, injuring at least seven people, including one seriously, local media reported. Several other buildings were also damaged, and about 5,000 people in the city of 400,000 were left without power.

The damage was particularly striking at the Bethel church, located in the north of the city. A gaping hole marked the spot once occupied by the roof, and windows were blown out of the cars in the church’s parking lot.

Seven to eight people were attending the weekly prayer meeting inside the church when they heard what sounded like an approaching freight train, local NBC affiliate Channel 2 News reported. The group raced to a small corner of the building for shelter.

“We were huddled right in here,” pastor J. Malcolm Phipps Jr. said in a televised interview, pointing to the corner. “We were just all balled up in a ball here, and praying. Everything blew in around us, but we were good. None of us even has a scratch on us.”

The Adventist Review’s sister publication, Adventist World, has also been affected by the U.S. weather. Last May, a tornado tore through a freight train carrying 50,000 copies of the Adventist World’s North American Division edition as it passed through Kansas, tipping over train cars and spoiling the magazines.

In Tulsa, Bethel church members praised God that no one was injured in Wednesday night’s storm.

The extent of the damage was being assessed Thursday.

The church, which had undergone a recent interior and exterior renovation, will hold Sabbath worship services at a nearby Sunday church until repairs are completed.

“We will focus on rebuilding our church, since the damage is much, and reaching out to the community to let them know that God is good,” Suttle said.