Top Adventist Leaders Build a Church in the Dominican Republic 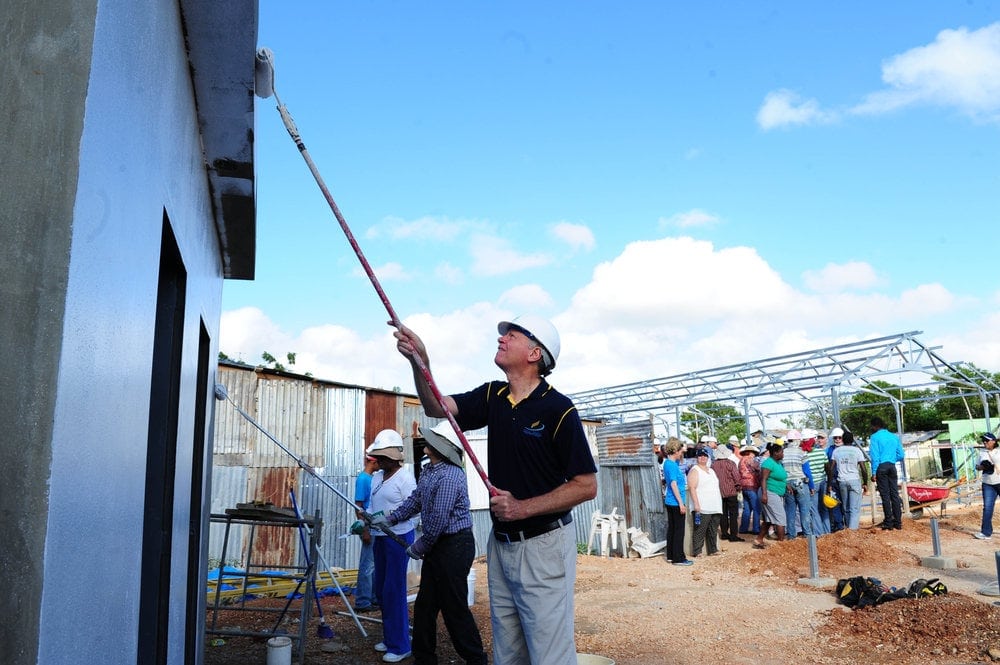 The Seventh-day Adventist Church’s 29 top leaders traded their laptops and cell phones for paintbrushes and shovels on Wednesday as they constructed a church building—some for the first time—on the Caribbean island of the Dominican Republic.

Ted N.C. Wilson, president of the Adventist Church’s General Conference, led the group of division presidents, general vice presidents and other senior church administrators in taking a break from a weeklong business meeting to assist in the project in the town of La Romana.

“What a privilege it is to take a break from administrative duties to do something practical,” Wilson said during morning worship at the hotel where the group is staying. “This is a work of multiplication—expanding the church.”

Top church leaders gather at the start of every year for a so-called PREXAD (President’s Executive Advisory) planning meeting, but Wilson encouraged the leaders this year to also build a church. Division presidents will join Silver Spring, Maryland-based officers in looking at the initiatives established in the last four years, examining the upcoming General Conference agenda, and engaging in strategic planning for the next quinquennium, said Orville Parchment, assistant to the General Conference president.

Ahead of the meeting, the General Conference contacted Maranatha Volunteers International, an Adventist-affiliated organization known for its One-Day Church building projects, and ultimately settled on the Villa Caoba Adventist Church in La Romana. The new church building will provide 40 local Adventist members with a place to worship. The structure is larger than a typical One-Day project, with male and female restrooms and a freshwater well that will offer drinking water to the local community of 12,000 people.

The local church conference contributed land and money to the project.

Local Adventists currently worship in a humble building with zinc metal sheets on its roof and walls, eight rundown pews, and an uneven dirt floor that gets muddy when it rains. Children meet for Sabbath school under a tree behind the church.

On Wednesday, church leaders primed and painted the two restrooms in the new church, laid brick walls, and placed the roof over the building’s frame. They also raised a One-Day structure with metal frames and a roof that will serve as the Sabbath school classroom next to the church.

In addition, the leaders held a prayer of dedication for a 200-foot (60-meter) well that can pump 22 gallons (83 liters) of water per minute.

Local residents currently rely on a truck that passes through the neighborhood daily for their water supply. The community will now be able to collect water during scheduled hours at the church.

Don Noble, president of Maranatha with a long history of coordinating projects in the Dominican Republic, welcomed the church leaders to the construction site and underscored the importance of volunteer work. He said Maranatha sorely lacks the resources to handle its backlog of 180,000 requests for churches and other buildings around the world.

“You’re the best-looking volunteer group we’ve ever had,” Noble told the leaders.

“I bet you say that to every group,” someone shouted back jokingly. Evangelist Mark Finley volunteered to paint the bathroom walls, and he was joined by General Conference vice presidents Ella Simmons and Armando Miranda.

Finley, who just wrapped up a five-day evangelistic series on the island that will result in 3,000 baptisms on Jan. 17, the last day of the PREXAD meeting, said two things were going through his mind as he worked Wednesday: painting correctly and praising God for the opportunity to serve Him.

“It’s wonderful to feel the international flavor with all of us here, to work together to expand the church,” Finley said.

Simmons, who is completing her second, five-year term as the first and only female General Conference vice president, said this was her first time to participate in building a church.

“I’ve wanted to do this for many years. It’s so wonderful,” she said.

Simmons spent some time painting and then announced that she had graduated to laying blocks.

Building a church with Maranatha was also a first for Israel Leito, president of the Inter-American Division, which includes the Dominican Republic.

“This is a very historic moment to have all the church leaders building a church for our members,” he said. “We are so happy because this assures our members that we are with them, not just sitting in our offices.”

Esteban Paredes, pastor of the Villa Caoba Adventist Church, said that the new church was the smallest of the six congregations that he leads locally but that the decision of the church leaders to work on the site had left a big impression.

“It is such a joy to see and have the leaders of the Adventist Church from around the world standing shoulder to shoulder to build this temple,” he said. “It’s a real privilege.”

After the mortar and paint dry, a Maranatha group will arrive in 10 days to complete the project. 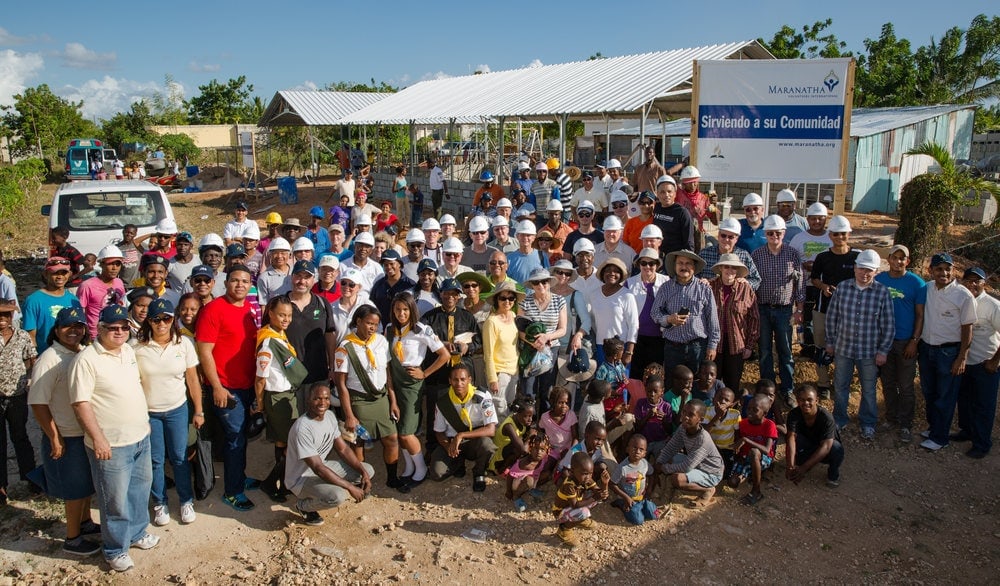 Back on the construction site, Wilson, who previously joined in building a church in Zambia, gave Blasious Ruguri, president of the East-Central Africa Division, a lesson on how use a cordless drill to fasten together the metal frame of the Sabbath school building.

Ruguri beamed as he spun in the first screws. “Yeah, yeah did you see that? One-minute training and look at that!” he said.

“You did a good job,” Wilson said.

“This is one of the things that we miss as leaders, getting our hands into building something like this,” Ruguri said. “This is part of the mission, and we need to do this more.”

In a few months, Maranatha is scheduled to help build churches in Kenya and Rwanda in his division. Ruguri said he would also ask his division leaders to take a day off work to assist with the construction.

Wilson observed that the Dominican Republic church project fostered a team spirit among the leaders and helped them focus on something local that was highly mission-oriented.

“This gives us the opportunity to do something very practical in a place that could use the help,” he said. “All of us are in this mission together.”