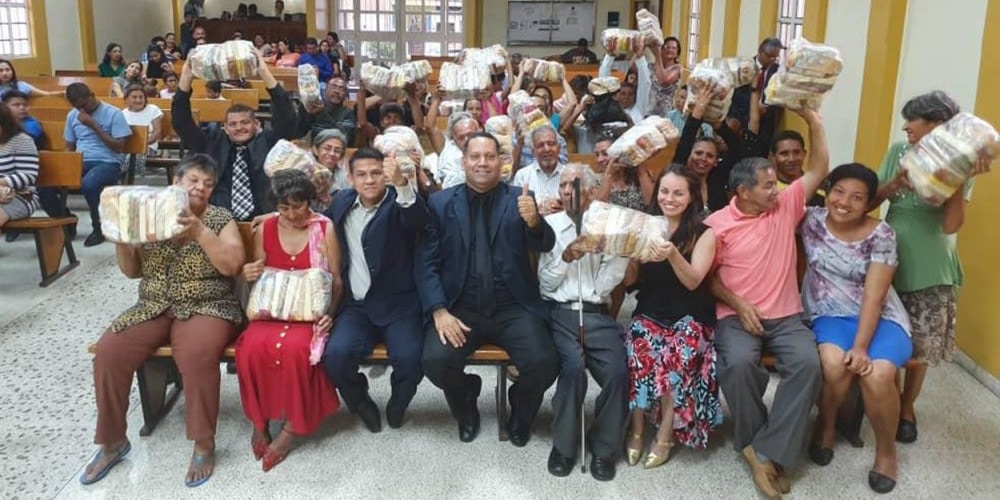 Thousands of the neediest families across the Seventh-day Adventist churches in West Venezuela recently received food baskets thanks to special contributions from a donor and local churches, in spite of rising economic challenges in the country.

“Our hearts go out to those who have challenging needs in Venezuela, which includes our dear church members,” said Adventist Church president Ted N. C. Wilson. “What a privilege to help facilitate the generosity of the donor to assist our church members, all to God’s glory. Let us pray for God’s protection and guidance for all who are in need as we point people to Christ, the Giver of all good gifts.”

Orlando Ramírez, executive secretary for the church in West Venezuela, said it was a blessing to receive such a generous donation and oversee the logistics to assist so many among the membership.

“Because of an anonymous Adventist donor facilitated by Wilson, thousands of our most vulnerable families benefited from this donation and compassionate gesture toward the difficulties that the church in Venezuela faces,” Ramírez said.

The sizable donation, together with additional funds collected from local conferences, was given the name “A Gift of Life” and benefited 3,030 families in dozens of local churches. Each family received a package, roughly a week’s worth of groceries, containing brown rice, cereal, cornmeal, whole-wheat flour, oats, granola, soy protein, and other items, explained Ramírez, who oversaw the special project.

“So many of our brothers and sisters were so thankful for the help and the sense of unity in the church with this assistance,” Ramírez said.

“The minimum salary and the salary of the general population doesn’t allow for the majority of the products to be obtained frequently or in sufficient quantities for all family members,” Ramírez said. “Every Venezuelan citizen has to be creative and adapt to consuming the most accessible food [at certain] times, consume the same food, and eat mostly carbohydrates with what they can afford.”

Everything about the “Gift of Life” project entailed miracles along the way, Ramírez said. From the sizable donation, to the Adventist owner of a foreign business who facilitated the purchase of food products at cost, to church member volunteers who assembled the food boxes, the transportation to the ten local conferences, and delivery to the vulnerable families who benefited in West Venezuela was all a blessing to witness, Ramírez said.

“Transportation of the grocery boxes took more than three months … amid the power outages across the country,” he explained.

Church administrators, department directors, district pastors, and church elders witnessed the joy and tears of many of the families who were given the food boxes at their church, Ramirez said.

“We pray that God rewards this spirit of love and kindness,” he said.