Thousands Line Up in California for $5.2 Million in Free Adventist Healthcare 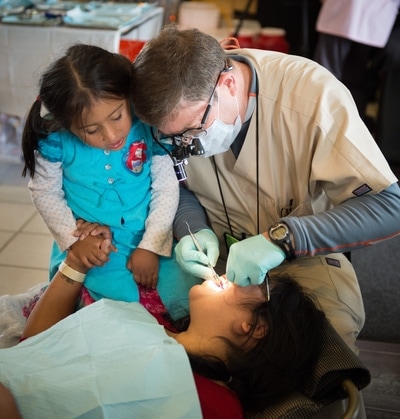 By Julie Lorenz, with additional reporting by Adventist
Review staff

Despite what you may have heard, Americans don’t only stand
in line overnight to buy the latest cell phone.

Scores of people recently waited all night in California to
receive free treatment from a team of Adventist dentists and doctors.

“Bridges to Health,” an event organized by ASI with the
support of two local conferences of the Seventh-day Adventist Church, provided
$5.2 million worth of medical services to 3,000 people over three days in the
cities of Oakland and San Francisco, the Pacific Union Recorder magazine
reported in its June issue.

But in a sign of the power of an unexpectedly successful
marketing campaign, demand grew so high that swamped volunteers were forced to
turn away hundreds of people.

“We were working together for one goal — sharing Christ with
those who are most in need,” said event organizer Lela Lewis, a physician from
Ridgecrest, who serves as president of the local chapter of ASI, or
Adventist-Laymen’s Services & Industries.

Dentistry was the most requested service at the April 23-25
event, which was held for two days at the San Francisco Armory and one day in
Oakwood’s O.co Coliseum.

Dental appointments filled up early in the day, and dentists,
dental hygienists and dental assistants provided a full spectrum of services,
including crowns, root canals, extractions and teeth cleaning.

“The need for dental services is just as great right here in
our own country as it is in many of the 25 other developing countries I’ve done
mission dental trips in,” said Peter Nelson, a dentist from the town of San
Luis Obispo.

Eye care was the second most requested service. After taking
eye exams, people chose from an assortment of glasses frames, trying them on,
with the assistance of eye-care volunteers. Prescription glasses were available
for pickup several weeks later at local Adventist churches.

As nurse Gertie Warnick performed eye exams, she met a
71-year-old man who hadn’t worn new glasses in 20 years. Warnick was moved by
the gratitude that he and other people displayed. “They couldn’t believe we
were doing this work for free,” she said.

Dentist Ted McDow treated a man who asked what the
volunteers were getting in exchange for their work. McDow told him that they
were followers of Jesus and wanted to follow His lead. When the man expressed
his desire to go to heaven, “I was able to tell him just how easy it is,” said
McDow, who prayed with him. The man later told McDow that he planned to visit
an Adventist church in the area.

A challenge that worried organizers was how to reach the people
who could benefit from the event. Local church members, Weimar Academy students
and others distributed flyers and hung posters in neighborhoods. Students from the
SoulsWest organization handed out tens of thousands of flyers. Local newspaper
owner and Adventist Paul Cobb promoted the event throughout Oakland. Signs were
posted at public transportation stops, in buses and on billboards.

But it was an ASI-issued press release that brought the
media in droves, organizers said. All major local news outlets reported about
the event, including three major television stations that offered live coverage.
About 20 media outlets carried stories, including the national newspaper USA
Today, while The Wall Street Journal published a photograph of the event as its
“Photo of the Day.”

The advertising and publicity worked beyond expectations. About
1,700 people received care in San Francisco, and another 1,100 were treated in
Oakland.

While many people were helped, many others had to be turned
away. In Oakland, about 3,500 people had lined up by 7 a.m. on a Friday.
Organizers were forced to estimate how many could realistically be served and
notify the others that they wouldn’t be able to receive treatment.

Local Adventist leaders and ASI are looking to organize a similar
event in San Antonio, Texas, prior to the General Conference session there in
2015.

“This medical event was just the beginning,” said Jim
Pedersen, president of the North California Conference.